On July 1, 2022, the American mastodon (Mammut americanum) officially becomes the Indiana state fossil—a decision that was debated off and on for at least 10 years, if not longer.

Gov. Eric Holcomb signed the state fossil bill in February--the first time a suggestion had made it to this stage.

In 2012, Indiana University professor P. David Polly and other scientists proposed that Indiana’s state fossil should be a crinoid: a group of ancient marine creatures often entombed in bedrock—including in Salem Limestone, the official state stone. In 2015, two senators coauthored a bill to honor a crinoid, the elegant sea lily, Elegantocrinus hemisphaericus. That bill, however, didn’t make it out of committee.

Crinoids lived in Indiana 200 to 400 million years ago during the Paleozoic era, when the state was covered by a warm, shallow sea. They appear to be plants, but they were actually animals—echinoderms, the same classification as starfish. You may have hunted for cylindrical crinoid fossil pieces in creek beds when you were a kid.

The mastodon suggestion came this year from Rep. Randy Frye (R-Greensburg), who said he was inspired by seeing a mastodon skeleton at Hanover College. Retired geology professor Stanley Totten testified in favor of the mastodon, calling it “the most common Ice Age fossil found in Indiana.” 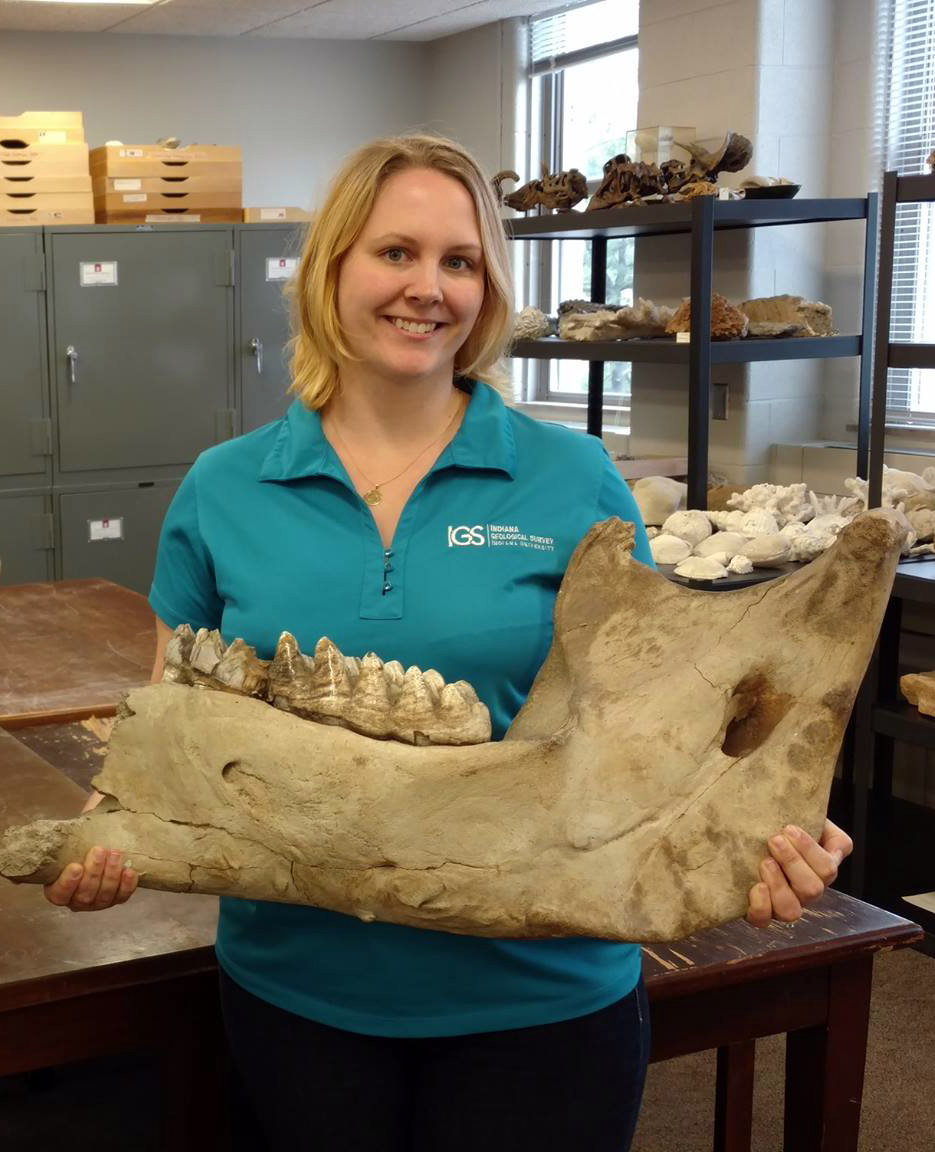 IGWS staff were not involved in the mastodon proposal. “This came out of the blue,” said IGWS Director and State Geologist Todd Thompson. Personally, he was in favor of honoring the Archimedes, which professor Bill Elliott at the University of Southern Indiana had championed around the time of the crinoid bill, because Indiana’s first state geologist, David Owen, named the spiral-shaped bryozoan in his initial survey of Indiana geology. Polly also made a case recently for the dire wolf; Thompson said bones from that animal were found in a mud-filled grike when State Road 37 was being widened to a four-lane. For years, Scouts and students wrote letters to their senators and representatives lobbying for a particular fossil to become the official state fossil, remembered Polly Sturgeon, education and outreach coordinator for the IGWS, but a proposal never came up for a vote. “It’s exciting that we have one now,” she said.

The mastodon is also the state fossil of Michigan, so designated in 2002. Mastodons were once abundant in what is now the Midwest, and coexisted time-wise with mammoths during the Pleistocene, but not in the same area. Mammoth teeth are flatter, like those of modern elephants, because they were grassland dwellers; mastodon teeth have more ridges, suitable for eating the twigs and branches of forests.

Mastodon bones have been found in nearly every Indiana county, Totten told the House Committee on Natural Resources. The most recent big find was in 2019, when a contractor uncovered a partial skeleton in Seymour while excavating for a wastewater system. Those bones and many others are now in the care of the Indiana State Museum.

The IGWS has some specimens, too. In 2012, a farmer walked in with a mastodon jawbone and asked if the IGWS wanted it. He’d found it in his field near Rensselaer in Jasper County. That bone, known as “Chompers,” is now part of the IGWS educational collection. If you have access to a 3-D printer, you can even print a replica of a mastodon tooth with these instructions posted to our website.

Indiana does not have an official state mineral yet, Sturgeon pointed out, so there’s still time to lobby your legislator about that if you’re so inclined.