The "Fossil Fanatic" gift pack includes: 1) the book, Geology of the Falls of the Ohio River, 2) hand lens, 3) trilobite sticker, and 4) fossil samples.

All that Glitters Gift Pack GS21

The "All that Glitters" gift pack contains: 1) the book, Gold and Diamonds in Indiana, 2) a pyrite (fools gold) sample, and 3) a gemstone sample.

This gift pack includes: 1) an Indiana-shaped limestone paperweight or coaster, 2) "Cutters of Stone," a 28-minute DVD documenting five generations of Indiana stone cutters and carvers, 3) a bookmark featuring limestone carvings, 4) a booklet, "Follow the Limestone: A Walking Tour of Indiana University," and 5) a calcium carbonate sticker.

A special gift pack that includes several popular geology books: 1) Indiana Rocks! A Guide to Geologic Sites in the Hoosier State, 2) Gold and Diamonds in Indiana, 3) Geology of the Falls of the Ohio River, 3) Let's Look at Rocks: Collecting and Identifying Rocks in Indiana, 4) Geology: An Introduction to Familiar Rocks, Minerals, Gemstones, and Fossils, 5) a grain-size chart, and 6) stratigraphy sticker. 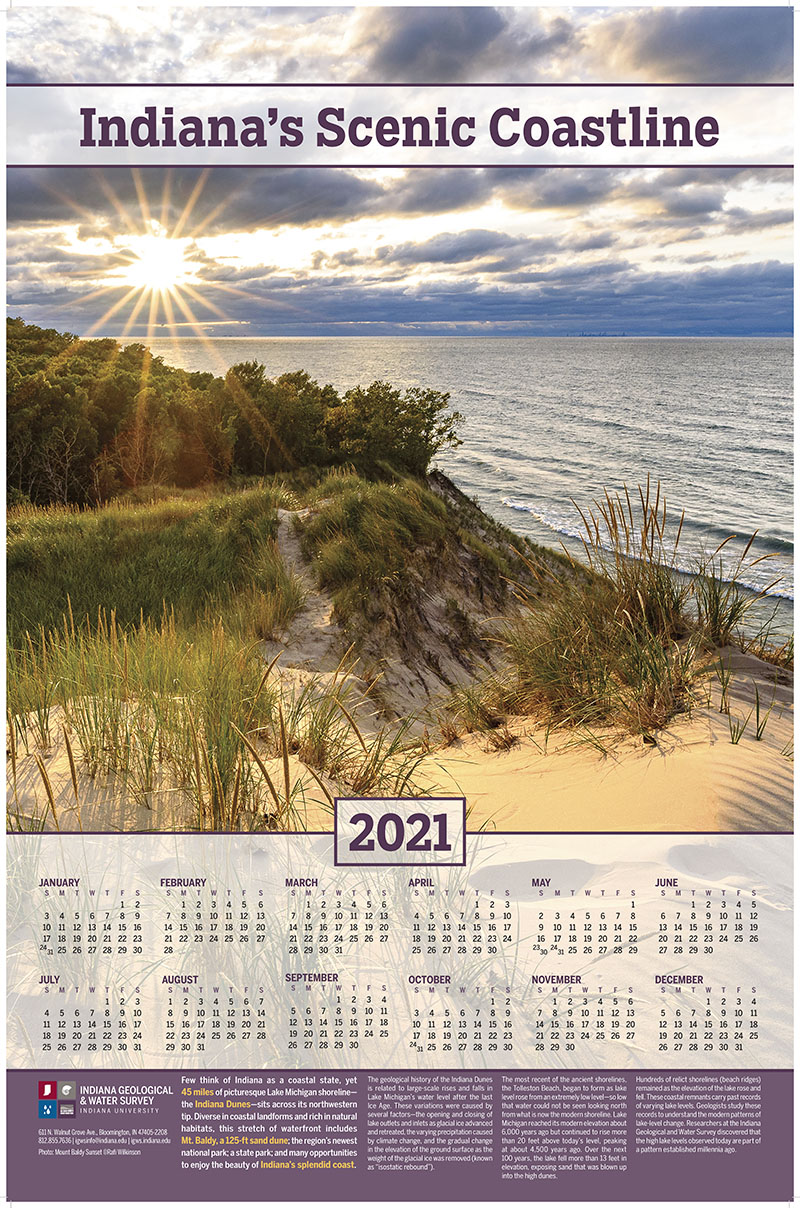 The 2021 annual Indiana Geological and Water Survey calendar, Indiana's Scenic Coastline, is now available. Few think of Indiana as a coastal state, yet 45 miles of picturesque Lake Michigan shoreline— the Indiana Dunes—sits across its northwestern tip. Diverse in coastal landforms and rich in natural habitats, this stretch of waterfront includes Mt. Baldy, a 125-ft sand dune; the region’s newest national park; a state park; and many opportunities to enjoy the beauty of Indiana’s splendid coast. The 21- by 33-inch calendar is printed in full color on heavy poster paper and is shipped rolled in a sturdy cardboard tube. 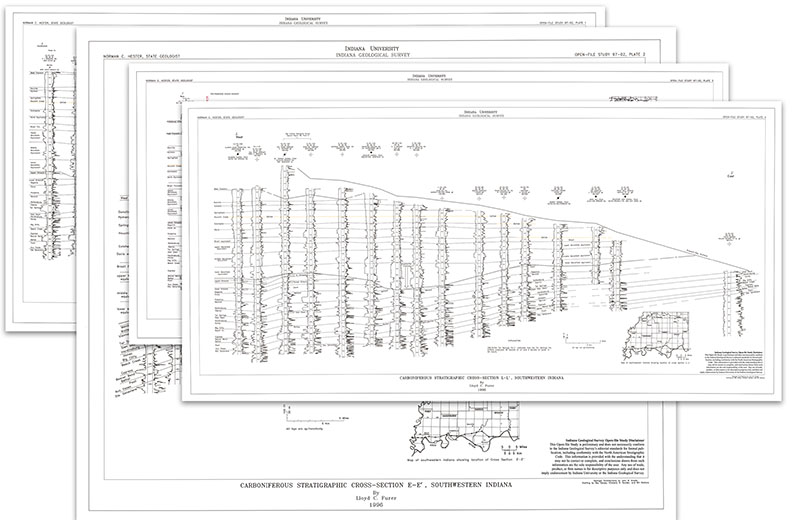 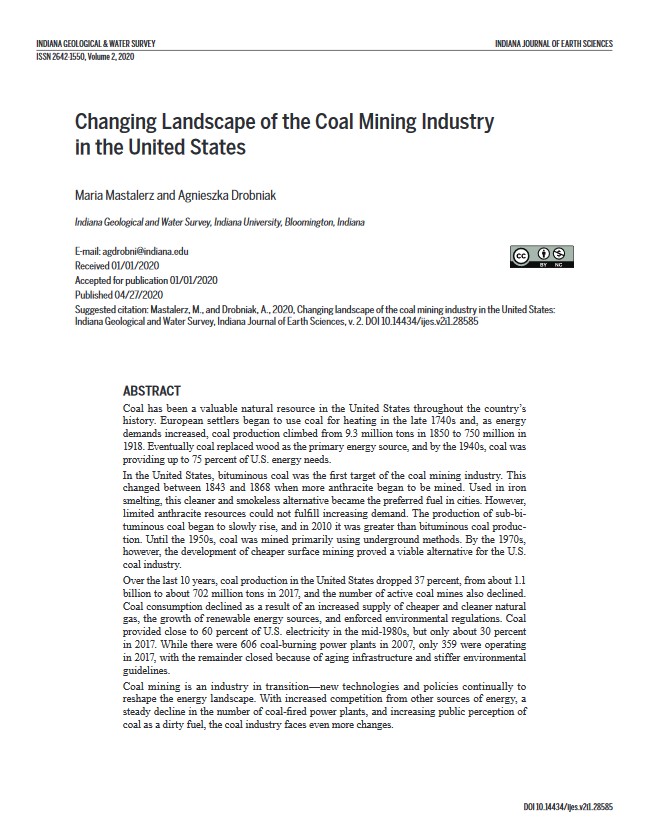 Coal has been a valuable natural resource in the United States throughout the country’s history. European settlers began to use coal for heating in the late 1740s and, as energy demands increased, coal production climbed from 9.3 million tons in 1850 to 750 million in 1918. Eventually coal replaced wood as the primary energy source, and by the 1940s, coal was providing up to 75 percent of U.S. energy needs. In the United States, bituminous coal was the first target of the coal mining industry. This changed between 1843 and 1868 when more anthracite began to be mined. Used in iron smelting, this cleaner and smokeless alternative became the preferred fuel in cities. However, limited anthracite resources could not fulfill increasing demand. The production of sub-bi - tuminous coal began to slowly rise, and in 2010 it was greater than bituminous coal produc - tion. Until the 1950s, coal was mined primarily using underground methods. By the 1970s, however, the development of cheaper surface mining proved a viable alternative for the U.S. coal industry. Over the last 10 years, coal production in the United States dropped 37 percent, from about 1.1 billion to about 702 million tons in 2017, and the number of active coal mines also declined. Coal consumption declined as a result of an increased supply of cheaper and cleaner natural gas, the growth of renewable energy sources, and enforced environmental regulations. Coal provided close to 60 percent of U.S. electricity in the mid-1980s, but only about 30 percent in 2017. While there were 606 coal-burning power plants in 2007, only 359 were operating in 2017, with the remainder closed because of aging infrastructure and stiffer environmental guidelines. Coal mining is an industry in transition—new technologies and policies continually to reshape the energy landscape. With increased competition from other sources of energy, a steady decline in the number of coal-fired power plants, and increasing public perception of coal as a dirty fuel, the coal industry faces even more changes. 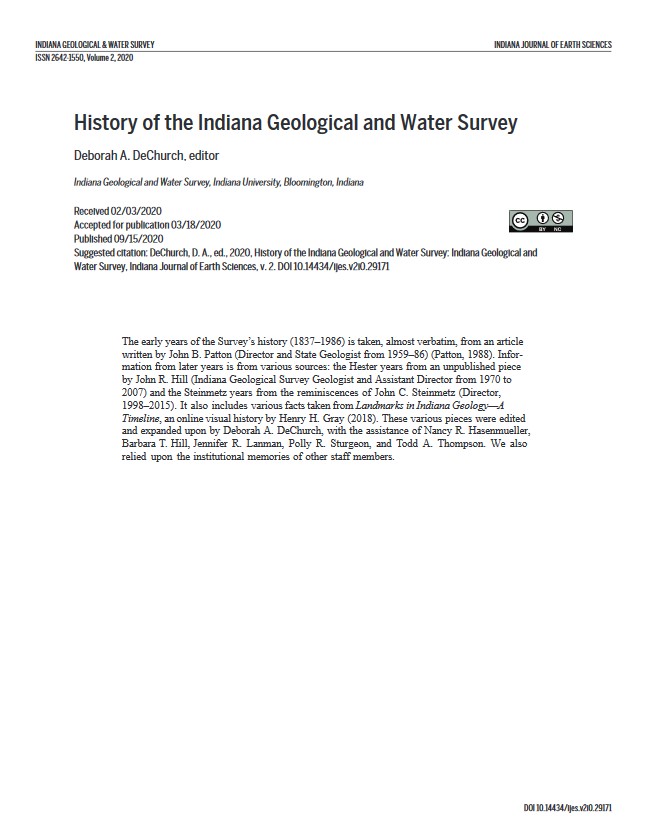 History of the Indiana Geological and Water Survey IJES10

The early years of the Survey’s history (1837–1986) is taken, almost verbatim, from an article written by John B. Patton (Director and State Geologist from 1959–86) (Patton, 1988). Information from later years is from various sources: the Hester years from a piece by John R. Hill (IGS Geologist and Assistant Director from 1970 to 2007) and the Steinmetz years from the reminiscences of John C. Steinmetz (Director, 1998–2015). It also includes various facts taken from Landmarks in Indiana Geology—A Timeline, an online visual history by Henry H. Gray. These various pieces were edited and expanded upon by Deborah A. DeChurch (IGWS Editor, 1992–2020), with the assistance of Nancy R. Hasenmueller, Barbara T. Hill, Jenna Lanman, Polly R. Sturgeon, and Todd A. Thompson. We also relied upon the institutional memories of other staff members. 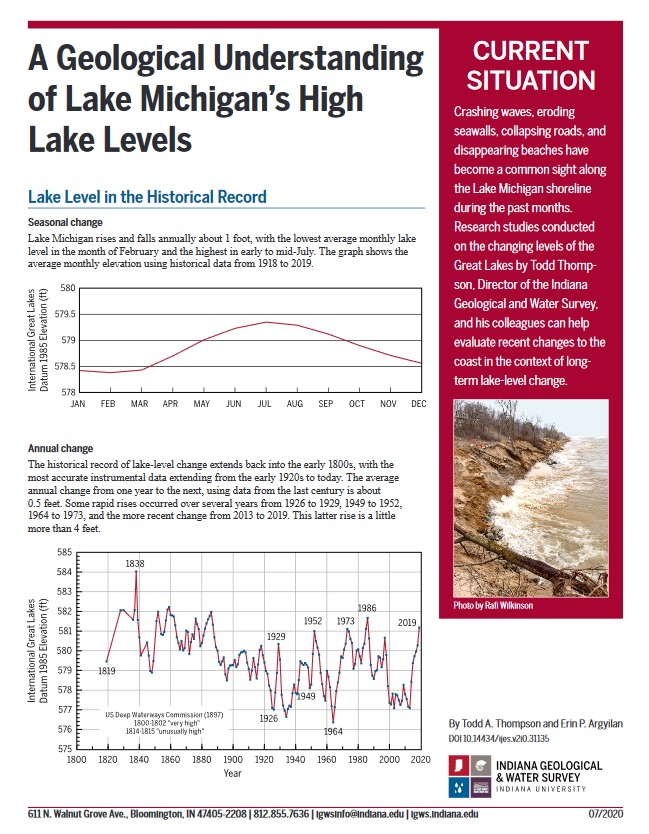 Crashing waves, eroding seawalls, collapsing roads, and disappearing beaches have become a common sight along the Lake Michigan shoreline during the past months. Research studies conducted on the changing levels of the Great Lakes by Todd Thompson, Director of the Indiana Geological and Water Survey, and his colleagues can help evaluate recent changes to the coast in the context of long-term lake-level change. 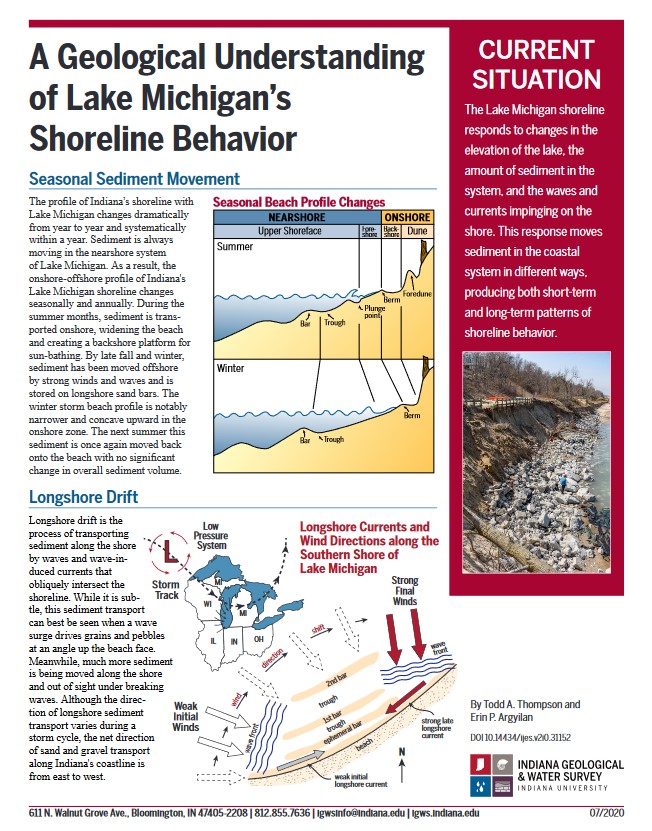 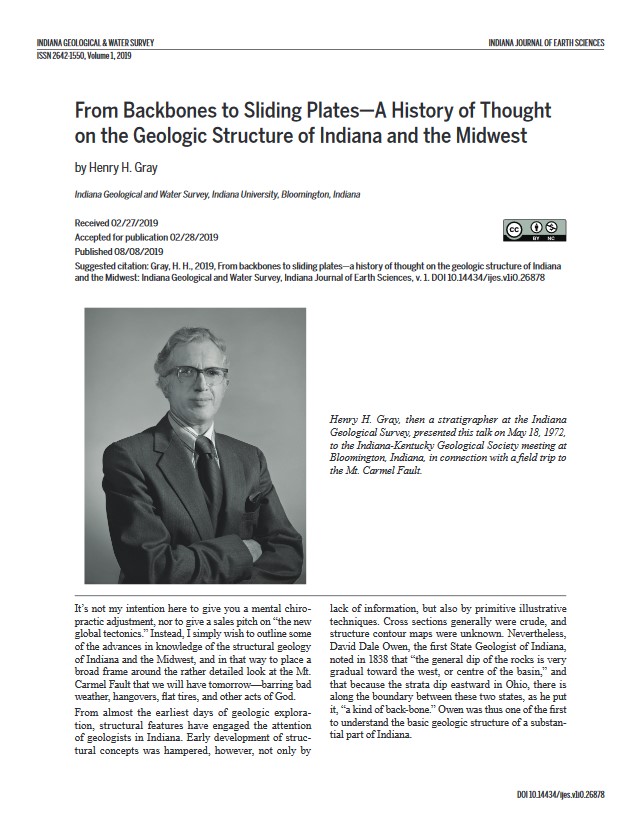 From backbones to sliding plates: a history of thought on the geologic structure of Indiana and the Midwest IJES06

Henry H. Gray, then a stratigrapher at the Indiana Geological Survey, presented this talk on May 18, 1972, to the Indiana-Kentucky Geological Society meeting at Bloomington, Indiana, in connection with a field trip to the Mt. Carmel Fault. 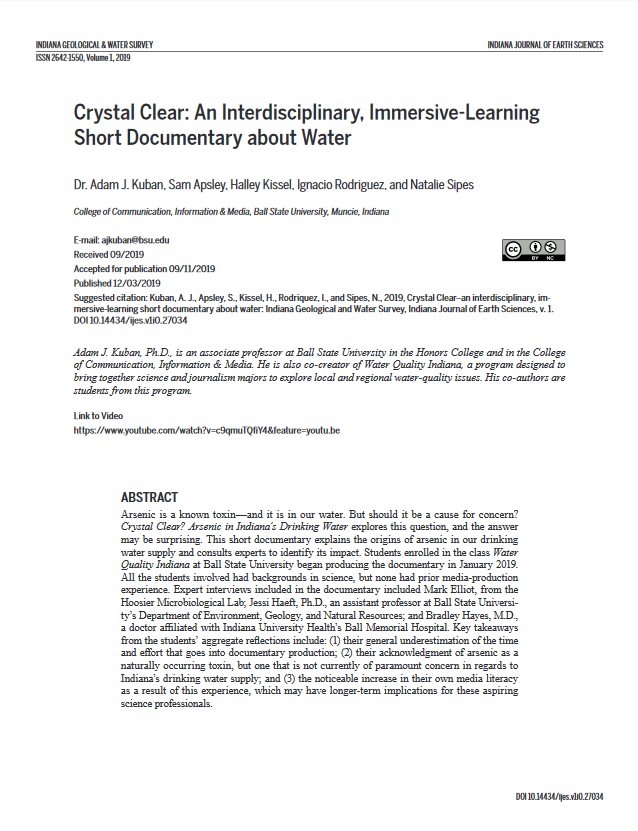 Arsenic is a known toxin—and it is in our water. But should it be a cause for concern? Crystal Clear? Arsenic in Indiana’s Drinking Water explores this question, and the answer may be surprising. This short documentary explains the origins of arsenic in our drinking water supply and consults experts to identify its impact. Students enrolled in the class Water Quality Indiana at Ball State University began producing the documentary in January 2019. All the students involved had backgrounds in science, but none had prior media-production experience. Expert interviews included in the documentary included Mark Elliot, from the Hoosier Microbiological Lab; Jessi Haeft, Ph.D., an assistant professor at Ball State Universi - ty’s Department of Environment, Geology, and Natural Resources; and Bradley Hayes, M.D., a doctor affiliated with Indiana University Health’s Ball Memorial Hospital. Key takeaways from the students’ aggregate reflections include: (1) their general underestimation of the time and effort that goes into documentary production; (2) their acknowledgment of arsenic as a naturally occurring toxin, but one that is not currently of paramount concern in regards to Indiana’s drinking water supply; and (3) the noticeable increase in their own media literacy as a result of this experience, which may have longer-term implications for these aspiring science professionals. 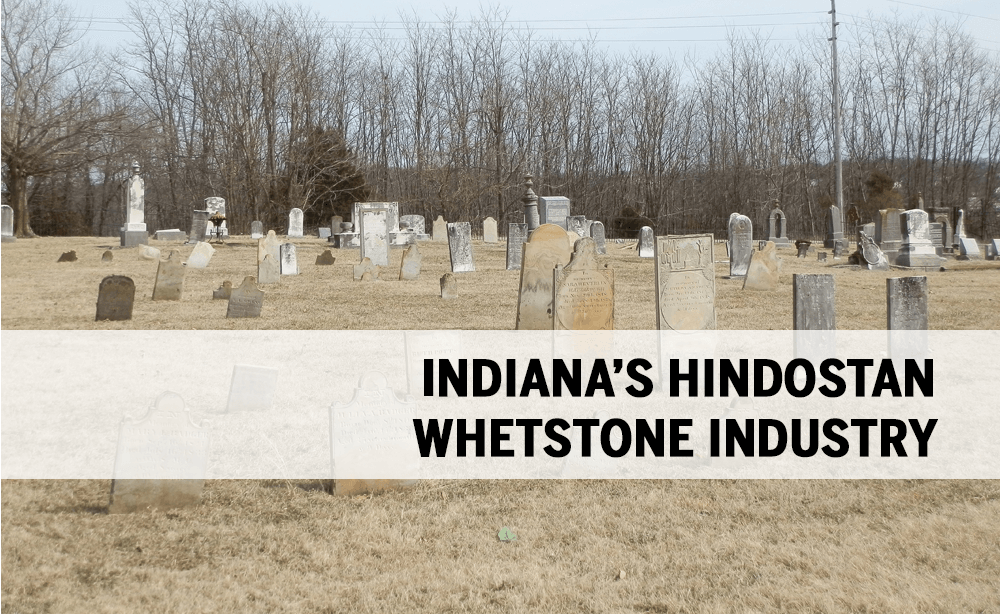 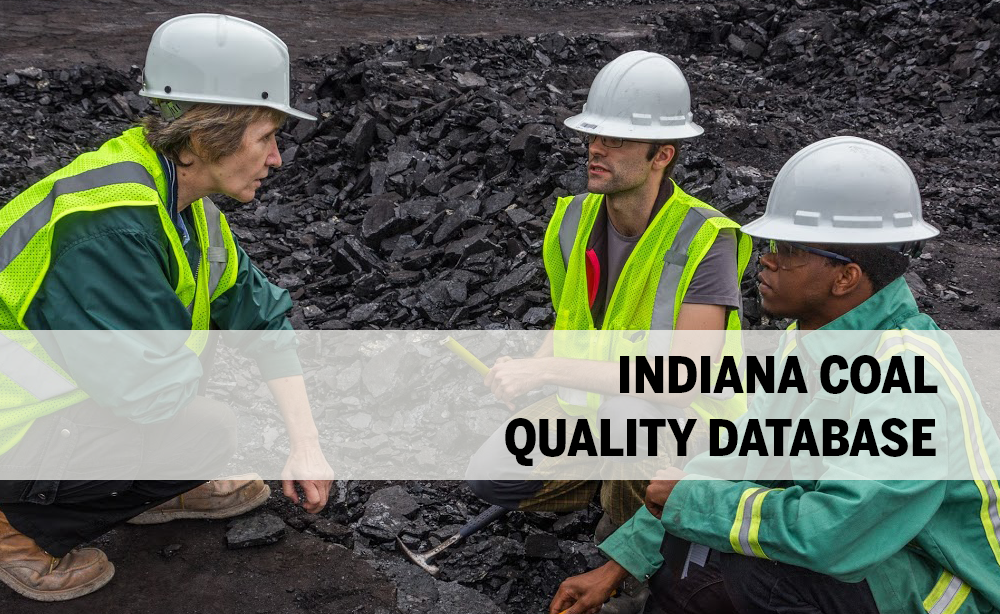 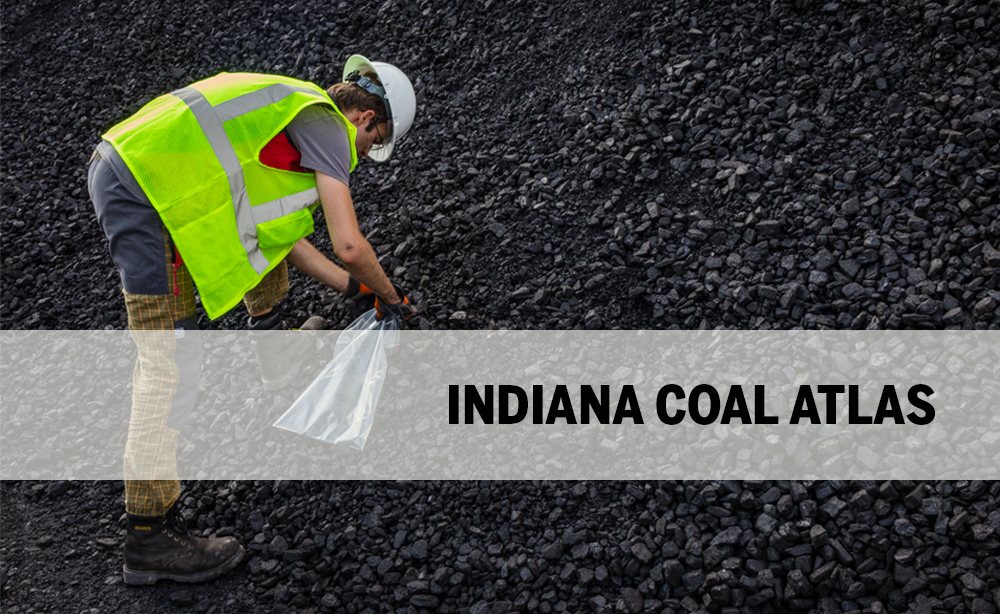 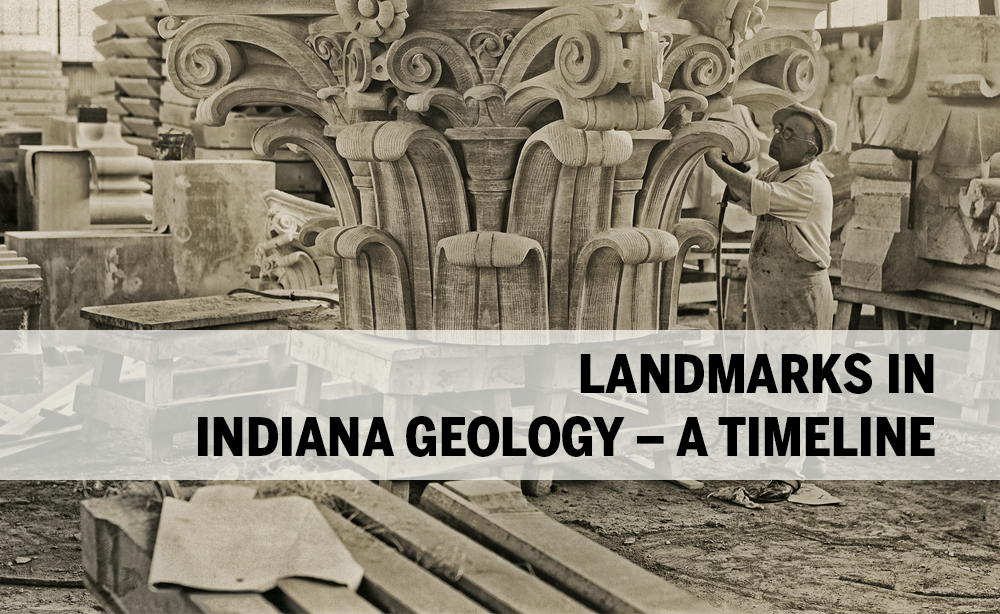 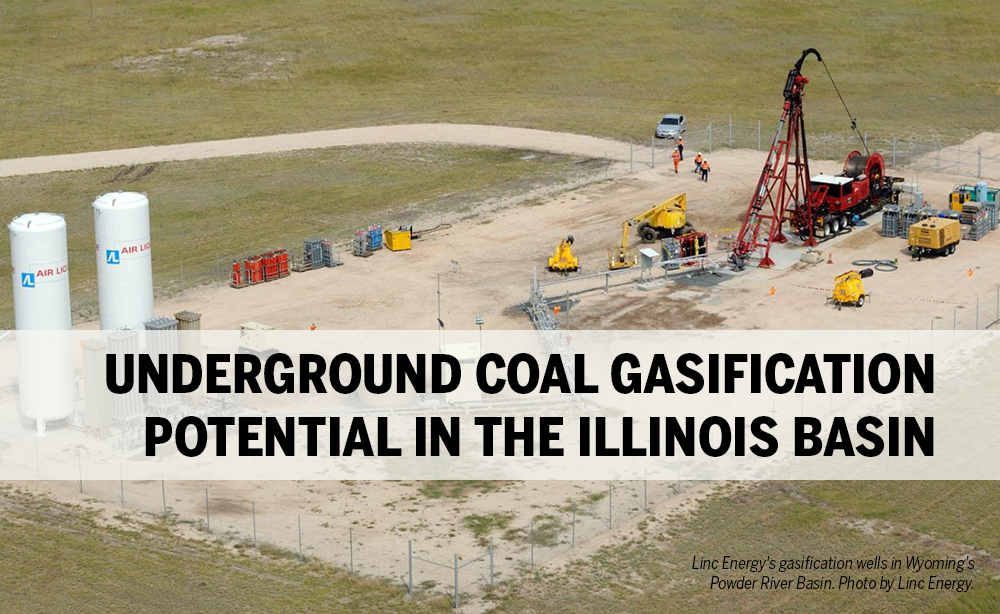 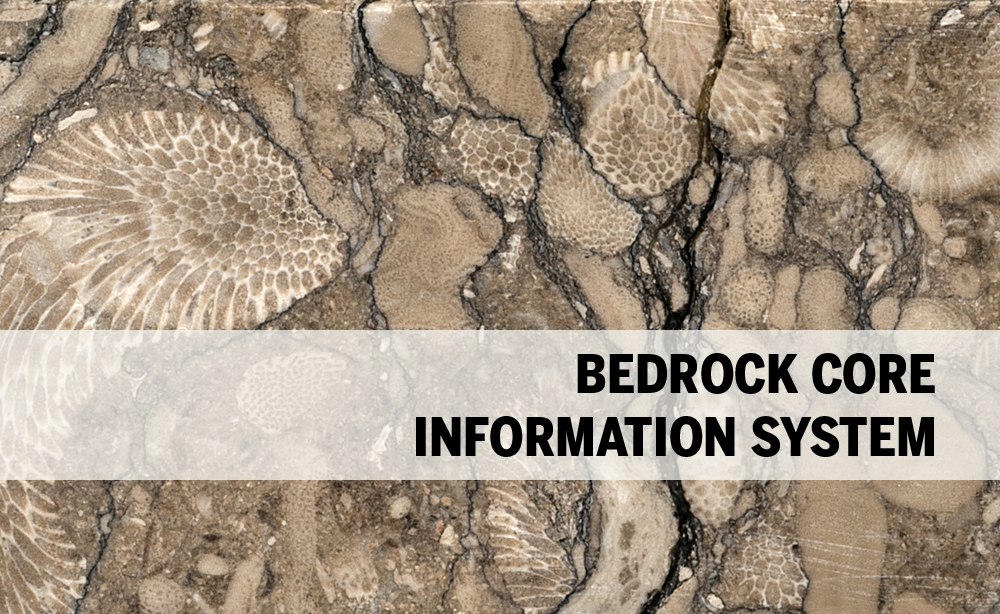 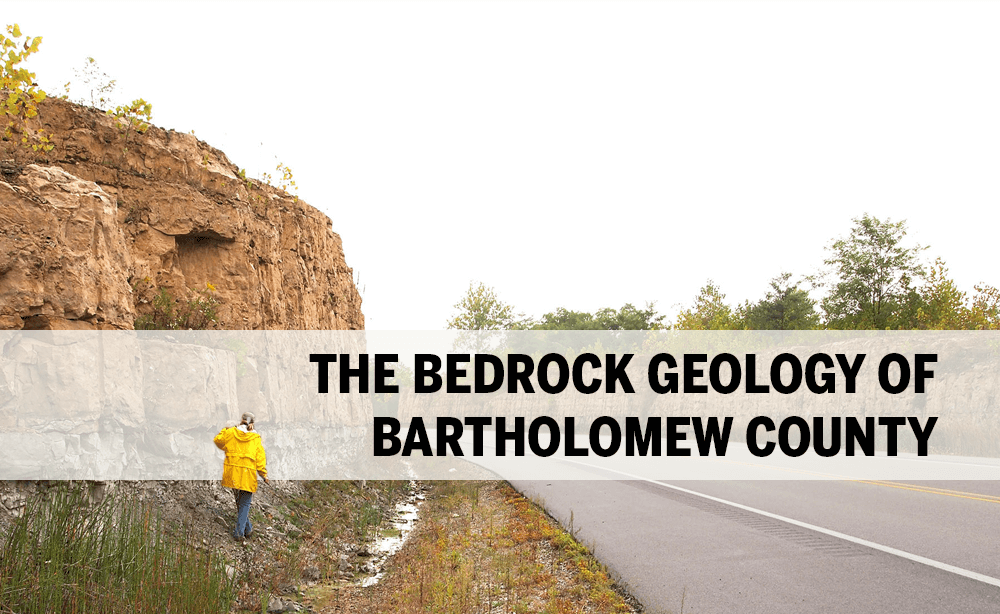 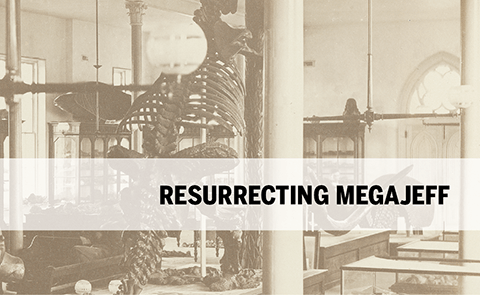 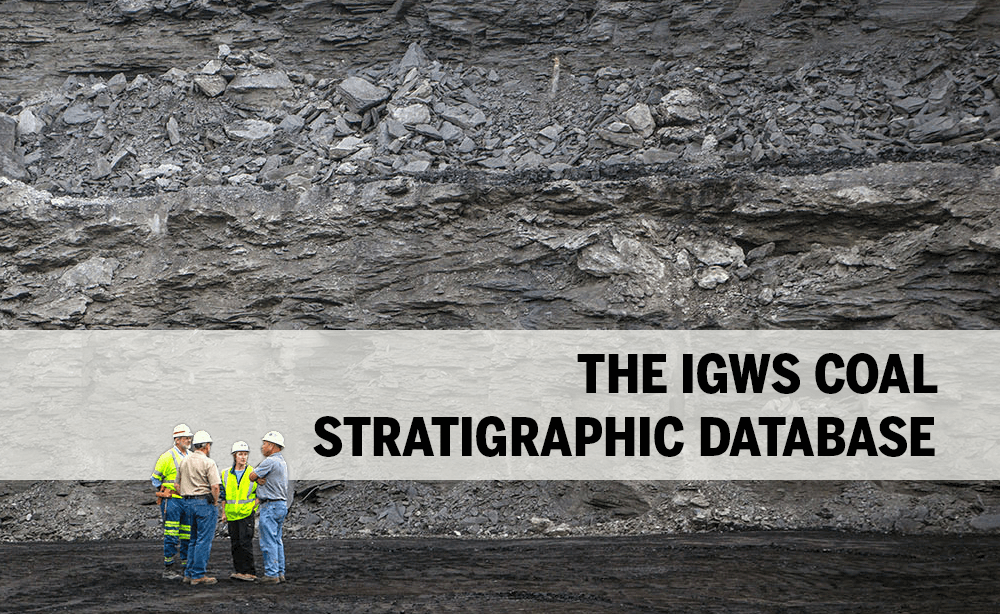