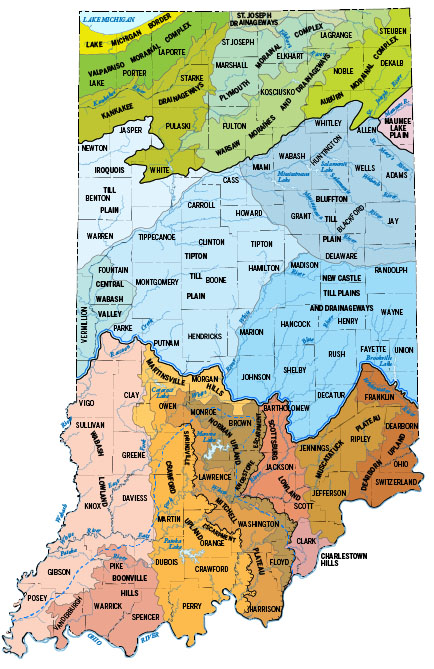 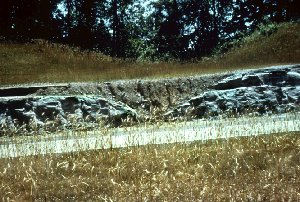 Figure 2. Glacial till fills a shallow stream channel that was incised into the underlying bedrock. On a larger scale, the process of glacial scour and infilling of valleys has resulted in the Tipton Till Plain.

The Tipton Till Plain (fig. 1) is a flat to gently rolling surface that is the product of continental glaciation during the Ice Age. Sediments borne by the ice sheets were deposited as till (an unsorted mixture of sand, silt, clay and boulders) when the glaciers advanced into Indiana and as outwash sand and gravel when the ice melted. Thick accumulations of till and outwash filled the bedrock valleys (figs. 2 and 3) and covered the bedrock hills of northern Indiana to produce the flat to gently rolling landscape thought of by many as monotonous.

Parts of glaciated Indiana, however, are hilly with many features of relatively high relief throughout. The Northern Moraine and Lake Region of northeastern Indiana typifies this kind of terrain and is noted for its spectacular scenery. The same glaciers that masked relief on the bedrock surface also produced the bold upland surfaces of, for example, Lagrange and Steuben Counties. Part of the topographic expression is the result of moraine formation by active ice and by the overspreading of the region with ablation or flow till that formed during times of glacial retreat. Large depressional areas, some of which contain lakes, form when large blocks of the melting glacial ice are buried beneath outwash sediments. With time, the buried ice blocks melt leaving behind a kettle hole or a kettle lake.

It may seem strange, but the highest elevation surface in Indiana (1,257 feet above sea level) is on the southern extremity of the Tipton Till Plain in northern Wayne County. The hilltop that attains this elevation is, however, unimpressive as a vantage point from which to view the surrounding countryside. Indeed, the entire area is but a rolling upland surface. This topographic high exists because the bedrock surface is relatively high in elevation and because the locale has more than 100 feet of glacial sediments atop the bedrock surface. 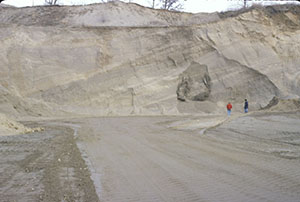 South of the Tipton Till Plain, the glacial-drift cover is thin or absent, and topography is controlled by rock type, the of the bedrock surface and the degree of dissection of the land by running water. The entire bedrock surface of Indiana, whether buried beneath unconsolidated (e.g., soft sediment) materials or cropping out at the surface, consists of . The major kinds of sedimentary rock in Indiana include limestone, dolomite, shale, sandstone, and siltstone.

Each of these sedimentary rocks weathers at a different rate and produces unique weathering byproducts. Limestone, for example, dissolves slowly in the presence of naturally occurring acids found in rain and snow and as part of the soil-forming process. The weathering of limestone by acid dissolution produces sinkholes, caves, and other features collectively known as . Dolostone, which is similar to limestone in appearance, is somewhat more resistant to dissolution than is limestone. Nevertheless, as we shall see, dolostone surfaces also contain karst features. Sandstone, which is made up mostly of the mineral quartz, is generally more resistant to weathering than the other major sedimentary rock types and this is due mostly to the composition of quartz which is both very hard and nearly inert to most naturally occurring chemical reactions. For this reason, quartz is the most abundant mineral on earth and wherever quartz grains are tightly cemented together as sandstone, this rock type forms spectacular cliffs and insulates underlying rock types from erosion. Shale, in contrast, erodes very rapidly as soon as it is exposed to water, which causes the aggregated clay minerals that make up the shale to slake and literally come apart.

Throughout most of Indiana, the bedrock system dips gently to the southwest at an average of one-half degree into a large structural depression called the Illinois Basin. This means that rocks exposed at a given locality would be found buried beneath 30 feet of younger rock just one mile southwest of the outcrop. Consequently, if you were to drive from east to west across the southern one-third of the state you would pass over rocks of progressively younger geologic age and you would also be conscious of rather abrupt changes in topographic expression. It is these changes in the lay of the land that results in the differentiation of the physiographic regions of southern Indiana on which we will now focus.

The Dearborn Upland is the easternmost physiographic region in southern Indiana (fig. 1) and it is a dissected plateau underlain by limestone and shale of mostly Ordovician age. The western boundary of the Dearborn Upland attains an elevation of 1,100 feet at its highest point and is the drainage divide separating the westward-flowing streams of the East Fork White River and the Muscatatuck River drainage systems from the southward- and eastward-flowing Indian-Kentuck Creek, Laughery Creek and Whitewater River. Bedrock of the Dearborn Upland disappears under thick glacial drift north of the Wisconsinan glacial boundary. It is this bedrock high that underlies the highest point in Indiana, as discussed above. 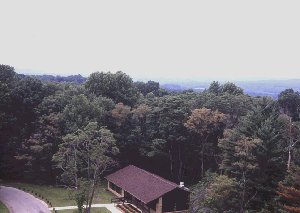 West of the Dearborn Upland, the dominantly limestone and dolomite bedrock surface dips southwestward into the Illinois Basin. Called the Muscatatuck Regional Slope, this gently sloping plain is made of bedrock that is mostly Devonian in age and that has been dissected by streams. Even otherwise gently undulating landscapes take on bold relief where major streams cross them. All along the Ohio River, for example, the uplands immediately to the north are rugged and stand in bold relief to the flood plain of the Ohio. In terms of geologic process, the downcutting of a major stream is a rapid and powerful force that leaves normal weathering processes lagging behind as agents that shape the land. Even though streams are actively wearing away the land and carrying its sediments to ever-lower elevations and ultimately to the ocean, along the reaches of every drainageway are vast accumulations of silt, clay, and sand that make up the flat lying flood plains over which the streams meander.

The Scottsburg Lowland parallels the Muscatatuck Regional Slope to the east and is a low-relief landscape because the shale bedrock of Devonian/Mississippian age that underlies much of this region offers little resistance to erosion. Surface elevations along the Muscatatuck Regional Slope descend to the southwest at about the same rate as local dip on the bedrock surface.

Most visitors to Brown County State Park who have braved the climb to the top of the fire tower on Weed Patch Hill have had little difficulty believing that they were on one of the highest elevations in Indiana. At 1,058 feet above sea level, Weed Patch Hill is the highest point along a serpentine land form called the "Knobstone Escarpment" that undulates from northern Brown County southward to the Ohio River (fig. 4). Consisting of steep-sided hills and valleys, the Mississippian age rocks that make up this spectacular and scenic region are mostly siltstone rich in silica. More than 330 million years ago, these rocks were then part of a vast delta system but now make up the bedrock known as the Borden Group, a collection of resistant rock types that form the Norman Upland.

The Norman Upland is joined on the west by the Mitchell Plateau, an area of relatively low relief that is pockmarked by sinkholes and underlain by extensive cave systems developed in the Mississippian age limestone bedrock. Surface drainage on the Mitchell Plain is rare because most streams disappear at various points along their reach into caves and joints developed within the rock. Stream erosion and dissolution of limestone by weakly acidic precipitation are the principal means of erosion that produced the Mitchell Plain.

Alternating layers of limestone, shale and sandstone of late Mississippian age and some sandstone of age make up the Crawford Upland, which is adjacent to the Mitchell Plain on the west. It is the presence of sandstone that accounts for the relief of this scenic upland region. Local relief of 300 to 350 feet is common within this physiographic region.

To the west, the Crawford Upland shares an interdigitate boundary—a lowland track. Called the "Wabash Lowland," this physiographic region averages about 500 feet above sea level and is more than 350 lower in elevation than the crest of the Crawford Upland. Relatively nonresistant siltstone and shale of Pennsylvanian age is the dominant rock type. In places, a thin layer of glacial materials blankets the bedrock, but the glacial tills are too thin to have a noticeable effect on the land forms.

The varied topography of Indiana is a legacy of active glaciation and the inexorable forces of running water acting through geologic time to erode and shape both soil and rock. The physiography of Indiana has left its mark on nearly every facet of our cultural development from the course of trails followed by the earliest occupants of the state to the location and trend of modern highways, power lines, and the placement of reservoirs.