There are two "glacial boundaries" of major significance in Indiana geology. The outer boundary, which marks the southernmost advance of the older ice sheets and is commonly known as “the glacial boundary,” transits an inverted U-shaped line across much of southern Indiana. The second boundary, which marks the maximum of the latest, the more influential Wisconsin-age glacial advance, crosses Indiana in midsection, roughly from Terre Haute to Brookville. 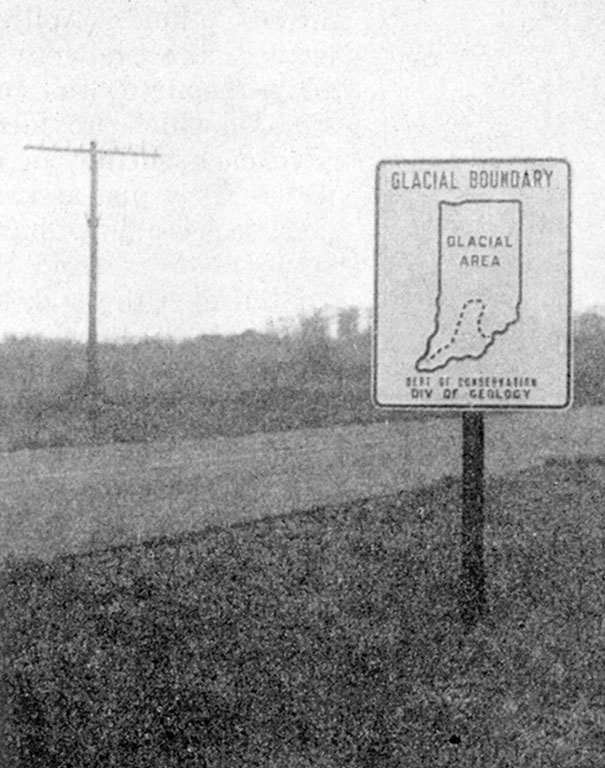 One of the official Indiana State Highway signs placed about 1937 to denote the glacial boundary. None are known to remain.

Earliest studies of Indiana geology took place before and during the time that the concept of continental glaciation came to be understood. By the middle of the nineteenth century, however, attempts were made to note the extent of the “diluvium,” as it then was called, as signified by such data as distribution of erratic boulders sourced principally from Canada, or by noting the southern limit of drift deep enough to obscure the nature of the bedrock beneath. These resulted in lines of very uncertain precision. Toward the end of the century, as the extent of the glacial deposits began to be better understood, it also became apparent that there were at least two distinct major phases of glacial activity – an early phase, the remaining deposits of which are scattered and discontinuous, and a later phase, the deposits of which lie more pervasively across the landscape.

The later (younger) boundary is easier to comprehend and locate with some precision. North of that line, designated the Wisconsin glacial boundary in recognition of the extensive deposits of that age in that state, are widespread deposits of till, a complex of materials directly deposited by ice. Typically nonstratified and nonsorted, not having been much worked over by the vast volumes of meltwater that emanated from the glaciers, till is not only rather easily identified, though complex; but more important, it is associated with soils that clearly indicate its relatively recent origin. In many places these soils are so distinct from the soils formed on adjacent older materials that the vanished margin of the ice can be determined within a very few meters laterally. In places this boundary is broken by stream valleys as wide as a few kilometers across, but other than this it may be drawn confidently across the entire state.

Not so the older boundary. May I begin with a personal note? As I was growing up in southern Indiana, on travels with my family I often saw official roadside signs placed by the highway department, noting with a small outline map, “Glacial Boundary.” Although I was quite young, I knew a bit about glaciers but I could not discern upon what basis the boundary was drawn. Even now, with many years field experience in Indiana, I still find it difficult to draw this boundary. Why?

A principal reason is that deposits of the pre-Wisconsin glaciations have for a long time suffered the vicissitudes of weathering and erosion. As a result, they’re patchy, discontinuous, hard to find, hard to delimit, hard to interpret. In many places it is difficult to determine whether the deposit was truly ice-lain. Furthermore, although there were several pre-Wisconsin glacial events, they have not yet been definitively sorted out. Earlier attempts to establish an orderly sequence of these events have been shown to be faulty. To make things more difficult, a blanket of wind-blown silt known as loess and principally of Wisconsin age, spreads eastward from the Wabash River valley, covers considerable areas of the deposits of the older glaciations, and obscures about fifty kilometers of the glacial boundary in southwestern Indiana.

And so, although it is known that ice of the older glaciations several times covered a large part of southern Indiana, the line that can be drawn marking their extent is discontinuously and very uncertainly drawn. It is also frequently subject to revision. The discovery of a patch of erratic cobbles, a few previously unknown glacial striations on bedrock, or data from a new bore-hole may cause the boundary to be shifted by a kilometer or more. Thus the outer “glacial boundary” is very much a work in progress.