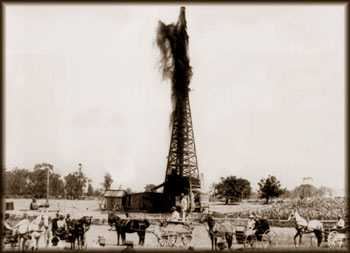 Geologists drill holes into the rock underground for several reasons. Probably the greatest number of drilled are for water and these are the ones most people are familiar with. But, usually very little rock information can be derived from them because they are either too shallow or barely drilled into bedrock. They are usually less than 100 feet (30 meters) deep and are only used by a few Pleistocene glacial geologists and hydrogeologists for rock data. Environmental and glacial geologists also use of the upper couple of hundred feet of an unconsolidated rock in their studies. Nearly as many wells are drilled to recover oil and natural gas or to dispose of waste water and other fluids. Most of the oil and gas wells do not find commercial oil and gas but they do acquire much geological and geophysical data that is used to more successfully explore for fossil fuels in the future. The average oil and gas well in the United States is about 8,000 feet (2,450 meters) deep. Many shallower holes are also drilled by coal companies to look for coal. Additionally, state and federal geological surveys drill holes to study the rocks, and to evaluate the occurrence of coal, gypsum, limestone and metallic minerals. It is important to determine what kind of rocks are there and how they were formed. Of course, most people are familiar with wells that are drilled to provide people with drinking water. The deepest well in the world is in Russia and is about 35,000 feet (7 miles, 10 kilometers) deep. 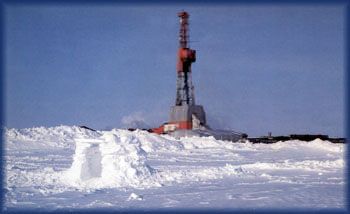 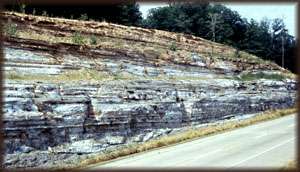 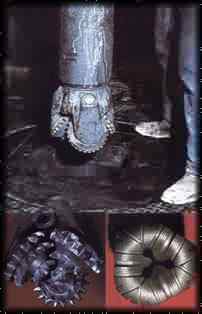 The first oil well was drilled in Pennsylvania in April 1858 by James M. Townsend and "Colonel" Edwin L. Drake. The drilling rigs in those days were about 40 feet (12 meters) tall and were made of wood. In the photo above (taken about 1890 in Jay County, Indiana), oil is "blowing out" from over the top of the derrick, which was a common occurrence throughout the early twentieth century. Today a large rig is 160 feet (49 meters) tall and made mostly of steel. The rigs are tall so that a drill bit of either hardened steel or diamonds can be put on the end of 90-foot (27 meters) lengths of drill pipe and lowered into the hole to drill the rock. The new rigs (photo to the right) have "blow out" preventers so that pressure of pockets of natural gas or other fluids will be contained within the well bore. In this way, oil is not lost and the environment is not contaminated. When a bit is dull, it must be pulled from the hole. The 90-foot sections of drill pipe are positioned standing up in the derrick until a new bit is screwed on the last length of pipe and then it is lowered back into the hole to continue drilling. Records for holes drilled for oil, gas, or minerals are available from the Indiana Geological Survey. Records for holes drilled for water are available from the Indiana Department of Natural Resources Division of Water.

The drill bit (photo to the right) breaks the rock into small fragments about the size of your little fingernail or smaller; these pieces of rock are carried to the surface by water mixed with mud that is forced down the inside of the pipe and comes up the outside, carrying the small chips of rock. A geologist can look at these chips under a microscope and determine what kind of rock is being drilled. A core barrel is attached to the drill pipe to replace the bit and lengths of rock are cut and recovered from the inside of the core barrel when it is pulled to the surface. These of rock range from about one to eight inches (2.54 to 20 cm) in diameter. It is much better to study cores than rock chips, but cores are very expensive to cut and are only cut where there is a special need to study the underground rock layers in detail.

After a hole is drilled, geophysical measuring instruments are lowered on steel lines into the mud- and water-filled hole. These instruments are then pulled up slowly and a paper log of the measurements is produced. Characteristics of the rock such as its conductivity of electricity, other electrical properties, its radioactivity (see ), and porosity (holes in the rock) can all be measured. These log records of "wiggly lines" (photo of log to the left) are very valuable for studying the rocks and their correlation from well to well. Correlations from well to well allow geologists to determine the three-dimensional shape and distribution of various types of rocks. Correlation also allows them to determine how the rock layers have been folded and faulted since they were deposited, and with that information they can then construct cross sections (drawing below, right)of the subsurface rocks. are similar to the view of actual rocks that you would see in a stone quarry or a road cut (photo below, right) along the highways of Indiana.

All illustrations except those of the old drilling rig, the cross section, and the road cut are from:
Baker, Ron; 1979; A Primer of Oilwell Drilling; The University of Texas at Austin; Austin, Texas.