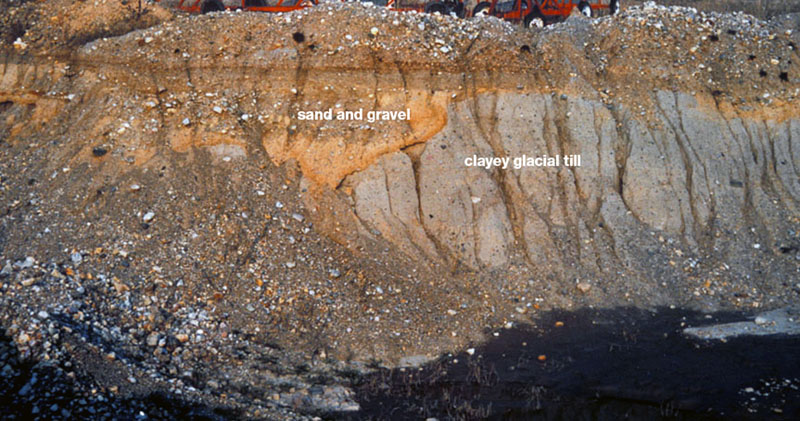 Figure 1.
Till versus gravel and sand

Sand, gravel, and specialty sand are major raw materials mined in Indiana. Weathering of rocks forms pieces of rock of various sizes and shapes as seen in Figure 1. Gravel consists of unconsolidated deposits made of pieces of rock greater than two mm in size and is almost always accompanied by sand deposits made of smaller pieces of sand. Even smaller sizes of silt and clay occur but such are usually removed by screening or washing during processing. Indiana has benefited from many deposits left by glacial actions. From about 12,000 to 2 million years ago, great, continental glaciers covered much of Indiana. Earth's climates changed such that large continental ice sheets grew and pressed southward from polar regions. These glacial ice sheets were enormous with some being miles thick. These ice sheets plowed soils, eroded rocks, and even plucked up solid bedrock and moved the debris into Canada and northern states. Numerous forward glacial surges and retreats occurred over thousands of years. During retreats ice melted and dropped entrained debris known as glacial till. Succeeding glacial advances brought more debris southward until another melting period occurred. Ice advanced at least four major times, sometimes coming from somewhat different directions. The complex ice movement left a covering of glacial materials in sheets as thick as several hundred feet. Different geologic conditions yielded different types of deposits in a complex pattern as seen in Figure 2A and 2B. Much of Indiana contains glacial materials, known mostly as till. 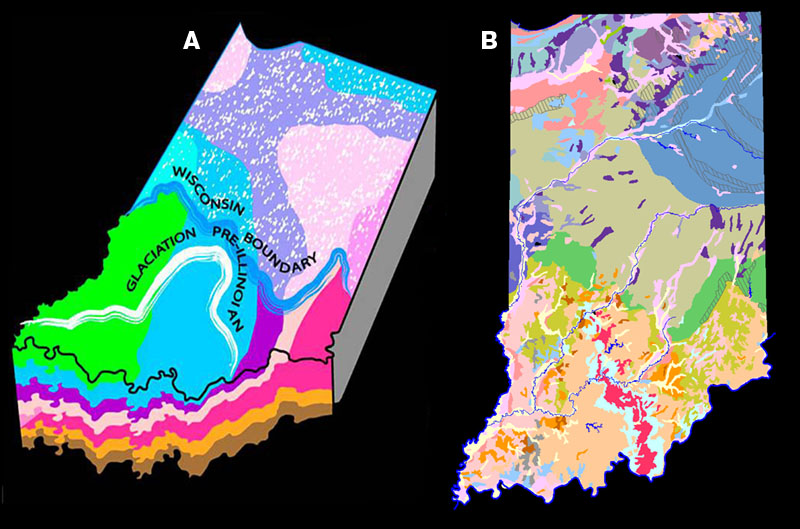 The till consisted of particles from tiny clays to house-size boulders in unsorted deposits. Running waters separated fine materials and washed them away leaving deposits of gravels and sands that form important economic deposits today. Most sand and gravel deposits occur along current rivers or streams but some occur in ice-age river deposits known as eskers or mounds of sorted sediments called kames (Figure 4). 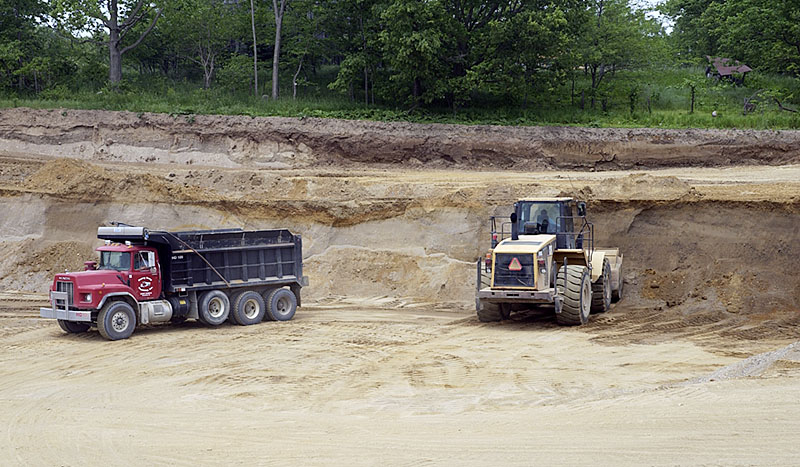 Indiana contains large amounts of sand and gravel. Deposits are mined by dry bank methods if they are above the water table. This is easy mining using loaders to scoop up the sands and put in large trucks. Most sand mining, however, occurs below the water table using large floating dredges that suck up the sand and gravel (Figure 6A). Raw materials are sometimes taken to preparation plants, screens, or crushers by truck but are more commonly washed through pipes in a dredging operation as seen in Figure 6B. Draglines can also recover sand and gravel from beneath the water (Figure 6C). In Indiana, a small amount of special sand is mined mostly to make glass. Frac sand for oil and gas production is a new application for sand mix units. 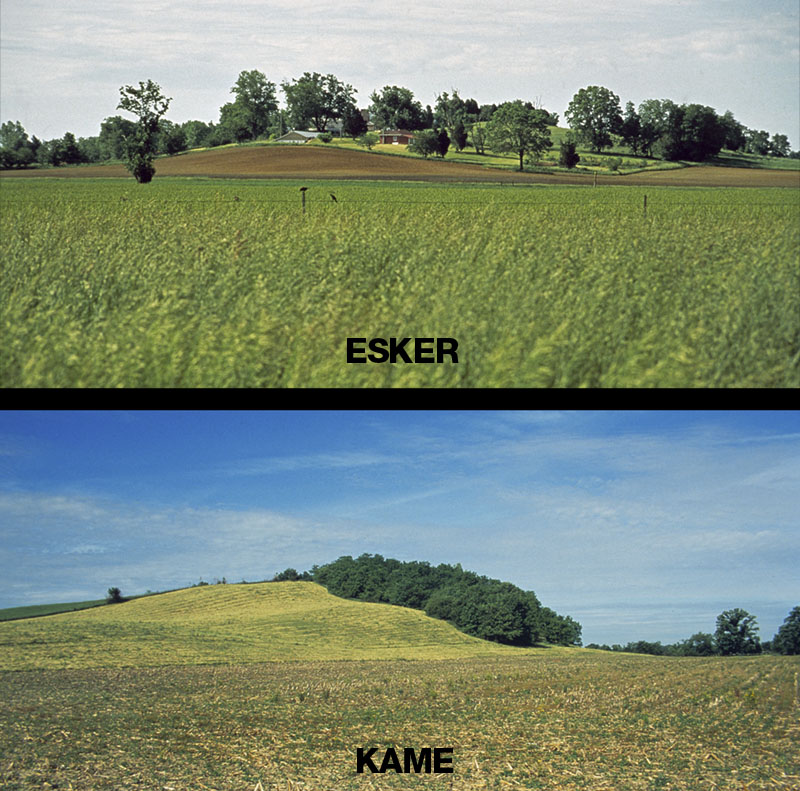 Figure 4.
Sand and gravel mining at a dry bank mining

Sand and gravel deposits contain particles of many kinds and sizes from clay ('2') to cobbles >10 inches. Companies sort the different sand and gravel sizes to produce products with very specific size ranges that meet use specifications. Inclined vibrating screening devices fitted with rugged metal screens of proper sizes are washed by water to accomplish the separation needed. Technicians continuously test produced materials to ensure quality control. Strict size specifications are needed as piles of product are stockpiled for construction use. 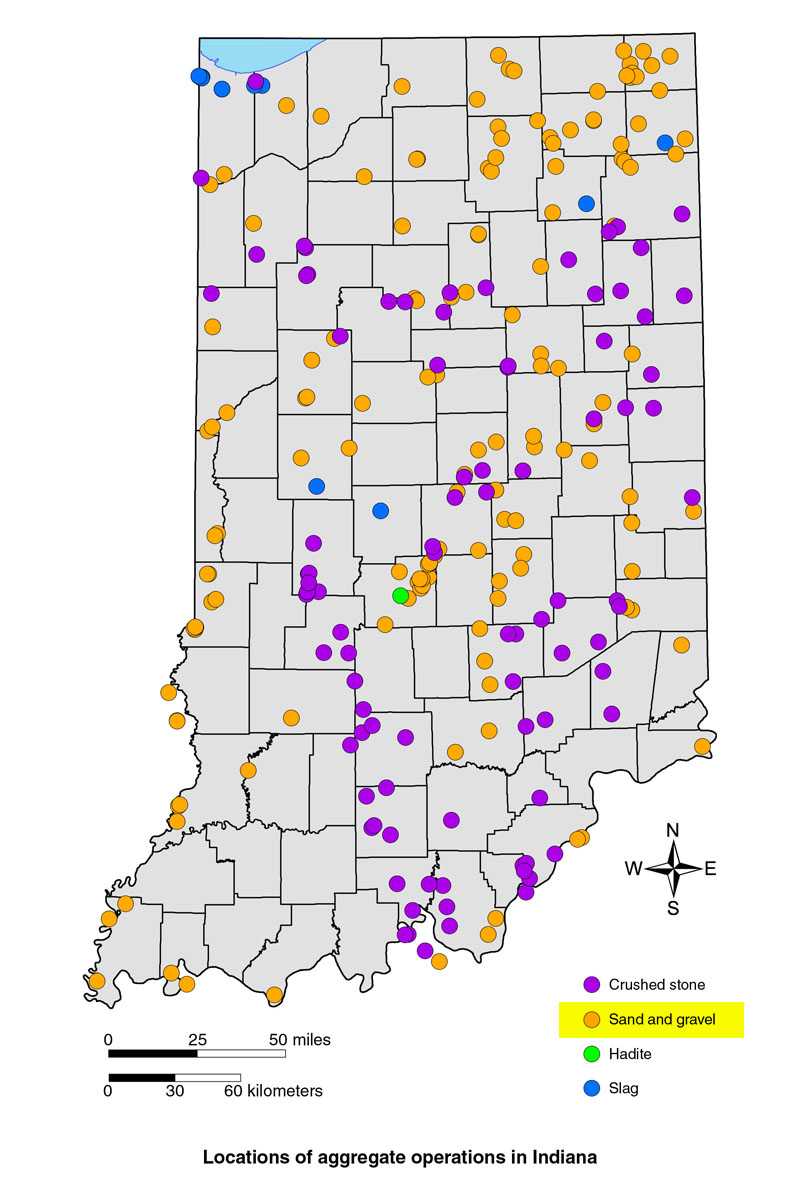 Sand and gravel products are used in almost all construction from major roads or building to individual homes. A mile of two-lane interstate requires 7,205 tons of aggregate and construction of an average home uses 400 tons. About 25 million tons of sand and gravel are produced annually in Indiana. Commercial producers need to be located near users because hauling aggregate takes time and money. Longer haul distances cost more. There are more than 150 mines in Indiana alone and 6,000 in the United States. Mines are located where suitable natural deposits occur often near cities or major transportation routes.

Because much sand and gravel is mined near cities, there is considerable post mining use of pits after sand and gravel has been extracted. Large corporate centers, parks, water front home sites, recreation or cultural sites and many other applications often follow sand and gravel mining. 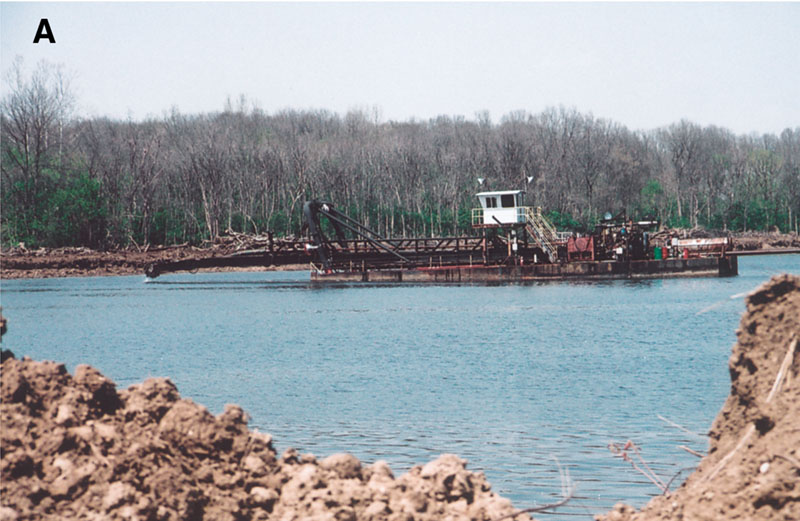 Figure 6a.
Dredge with cutter head exposed on left end of barge. 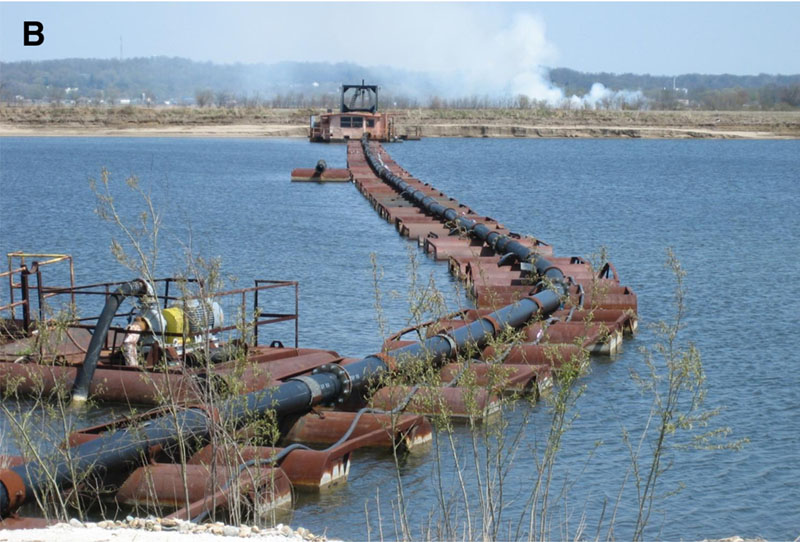 Figure 6b.
Dredged gravel is pumped to processing facilities on shore. 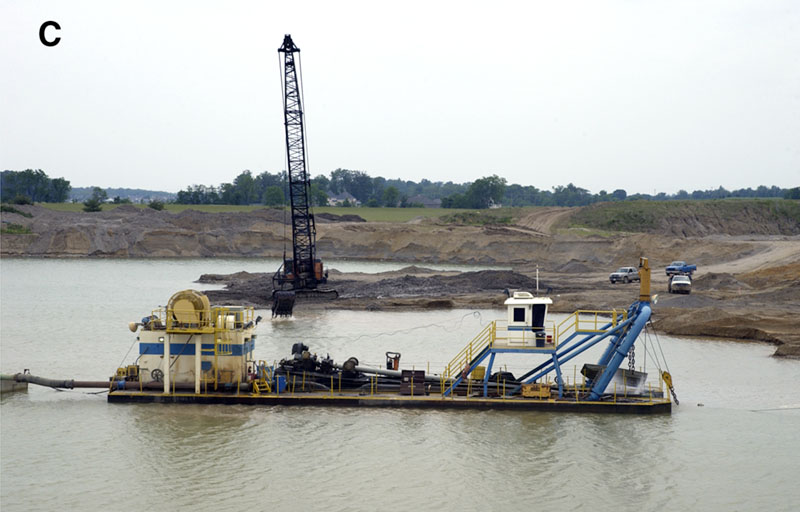 Figure 6c.
Other dredging operations use a dragline and bucket as in the background plus a dredge as in the foreground.