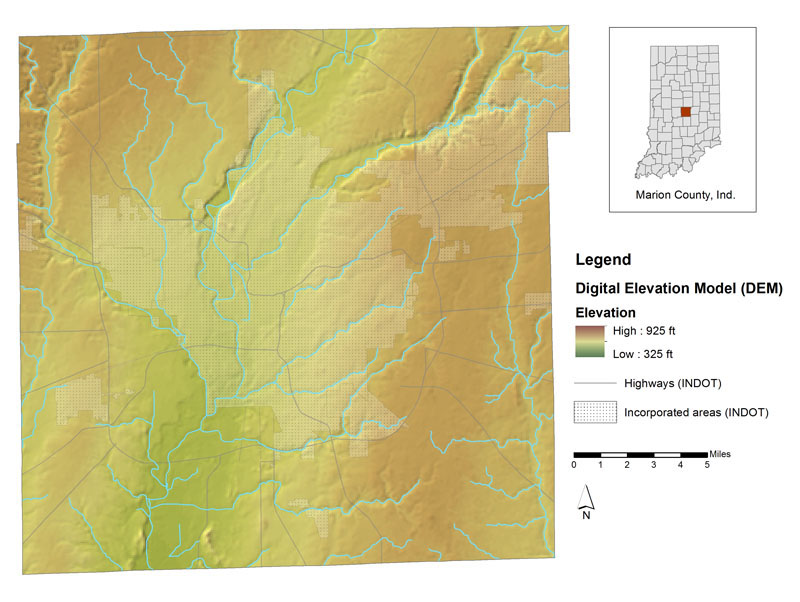 Figure 1.
Map of Marion County, Indiana, showing the elevation of the ground surface using gridded spatial data. Blues and green are the lowest elevations and darker browns are the highest elevations in the county.

A representation of the elevation of the land surface of Marion County can be viewed in a digital elevation model (DEM) such as the one displayed in the interactive map portion of this website (fig. 1). A DEM is a raster data set containing elevation data in a closely spaced grid pattern. The U.S. Geological Survey has produced digital elevation models of the entire United States (except Alaska) at resolutions of approximately 30 meters and 10 meters/pixel; these are available as the National Elevation Dataset (NED). Alaska is available at a lesser resolution of about 60 m/pixel. Some states, counties, and municipalities are funding the creation of elevation data with an even greater level of detail. The DEM on this website is part of the newly created statewide digital elevation model for Indiana, which was created from the 2005 IndianaMap Color Orthophotography Project. This data set, as well as many other different types of raster data sets created for the state, are available for download from the Indiana Spatial Data Portal.

A digital elevation model can be viewed in many ways using computer enhancements in GIS software programs. Various color ramps may be applied indicating the different elevations. Hillshading is a process that produces a raster which highlights changes in elevations, producing shadow-like effects on hillslopes. The hillshade may be viewed in shades of gray or it may be combined to enhance a colored version of a DEM, creating an illusion of 3D, as seen in Figure 1.

An even more detailed data product called LiDAR, is available for the state. The data is on IndianaMap for viewing and download.