Geothermal ground-source heat pump systems (GSHPs) use stable temperatures found in the upper few hundred feet of the earth's surface as a heat battery to efficiently heat and cool homes, schools, and businesses. During the winter, heat is pumped from the subsurface into buildings; and in the summer, it is transferred from the structure into the ground by reversing the process.

Average annual air temperatures vary between 47 and 57⁰F in Indiana. It is generally assumed that stable ground temperatures occur at depths greater than 20 feet and mirror average air temperature for a particular location (Hart and Couvillion, 1986). Because shallow subsurface ground temperatures show little fluctuation around the average air temperature, heat extracted in the winter months needs to be supplemented to effectively maintain room temperature (70⁰F). Still, GSHPs use 25 to 50% less energy than typical heating and cooling systems because energy is being exchanged with the earth instead of relying heavily on electric and fossil fuel energy like traditional systems (USDOE, 2012). In other words, these systems are efficient because they do not create thermal energy, but instead move thermal energy between the building and the ground.

GSHP heating and cooling systems use a ground heat exchanger or “ground loop” to move heat from the ground into a building and vice versa.  The loops can be installed either vertically or horizontally into the earth. Horizontal systems use closed loops while vertical systems can be either open or closed (fig. 1). The efficiency of the system depends on both the temperature gradient surrounding the loop as well as the properties of the geologic materials in which the system is installed.

Closed horizontal loop GSHP systems are typically installed in trenches 4 to 6 feet below the earth's surface where temperature fluctuations can affect efficiency (fig. 2). These systems tend to have lower installation costs compared to vertical systems because installing vertical wells is generally more expensive than trenching. On the other hand, they require more surface area for a given system capacity and can be less efficient owing to variable soil moisture and temperature conditions in the shallow subsurface. 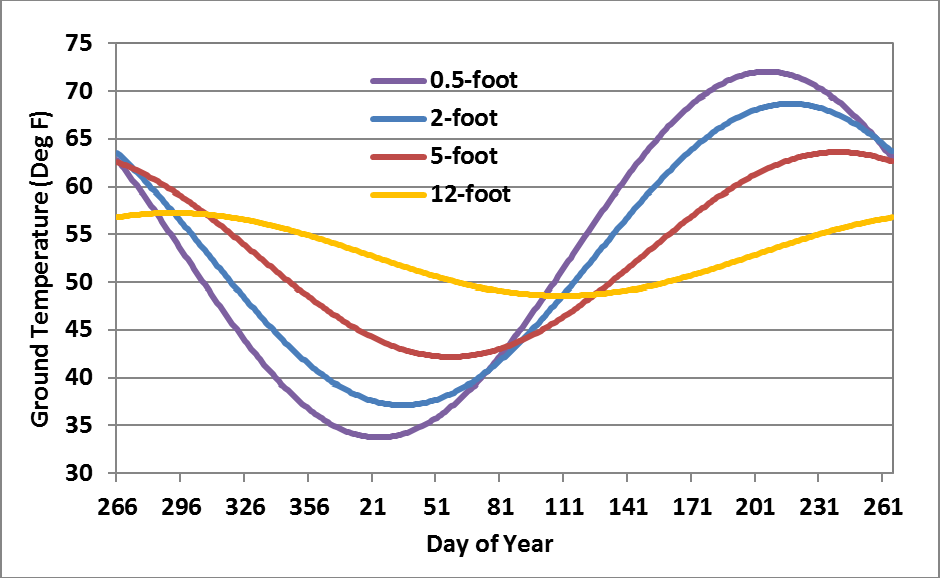 Vertical GSHP systems have been installed at depths of up to 400 feet in Indiana. Closed loop vertical systems use one or several boreholes with individual loops placed in each; these loops circulate a fluid through sealed piping that either absorbs heat from or relinquishes heat to the geologic material surrounding the borehole. In contrast, open loop systems use a pumping well to extract groundwater from an aquifer that is at a temperature comparable to the mean annual air temperature for the area. Heat is extracted from or relinquished to the water, which is then pumped back into the aquifer using a discharge well.

Geologic controls on efficiency and design

Temperature gradients
Subsurface temperatures at GSHP loop installation depth(s) are a primary control on heat exchange. Horizontal systems installed at depths of 6 feet or less are subject to seasonal temperature fluctuations (fig. 2). Vertical ground-coupling systems that extend below the water table or potentiometric surface of an aquifer will likely be exposed to roughly constant year-round temperatures, provided the depth is greater than approximately 40 feet (based on data collected in Indiana). Groundwater temperatures are generally constant down to approximately 300 feet and tend to mirror the average surface air temperature (fig. 3) for a particular location. 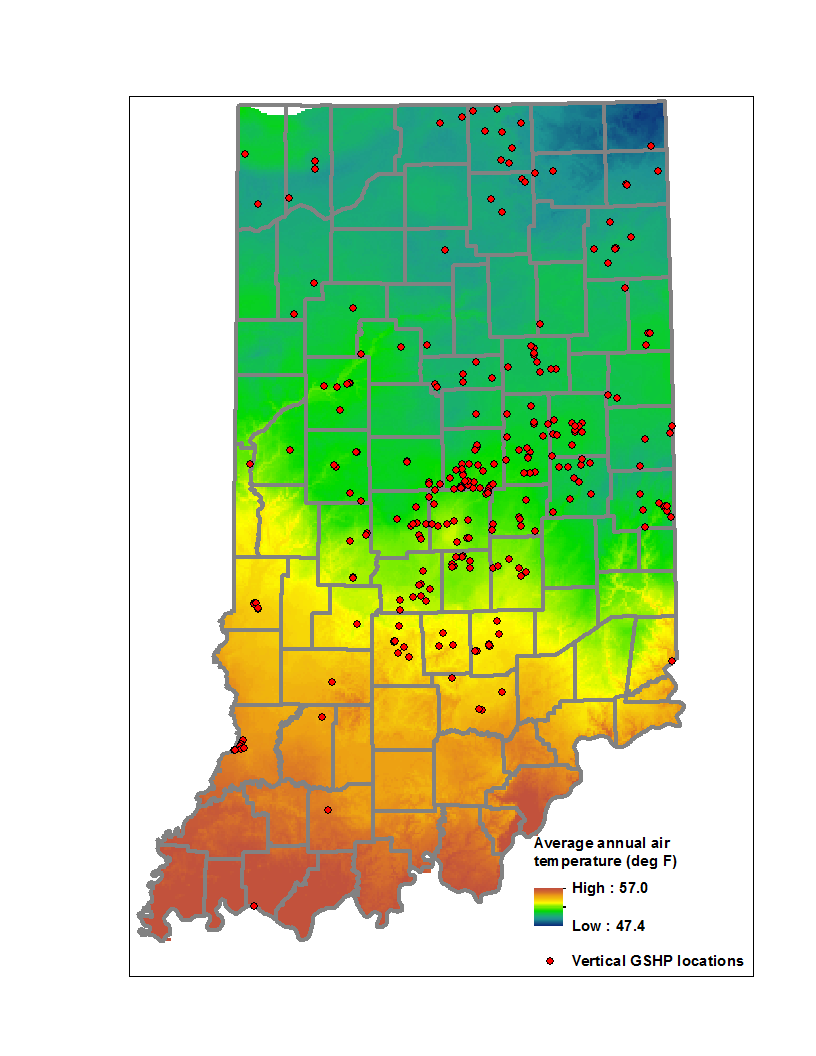 Thermal properties of geologic materials
The thermal properties of sediments and rocks can strongly influence the heat exchange efficiency for ground-coupling earth loops. Thermal conductivity is a measurement of the ability of a material to transmit heat. Thermal diffusivity is a measurement of the ability of a medium to conduct heat relative to its thermal capacity. Thermal conductivity and diffusivity values for three types of unconsolidated sediment textures were collected in Indiana (Table 1).
As moisture content increases in a particular geologic material, thermal conductivity also increases. The relationship between moisture content and thermal diffusivity is more complex at higher moisture contents; however, moist sediments and rock are generally more effective at transferring heat than equivalent dry materials.
The texture of unconsolidated sediments also influences thermal conductivity; sandy sediments tend to be more responsive to varying moisture content, whereas loamy materials (a mixture of clay, silt, and sand) show a narrower range of conductivities (fig. 4). The combined influence of texture and moisture is especially important to consider for horizontal GSHP systems where the ground-coupling loop may periodically be exposed to dry sediments.


Table 1: Typical values of thermal conductivity and diffusivity for a variety of different textures and moisture contents 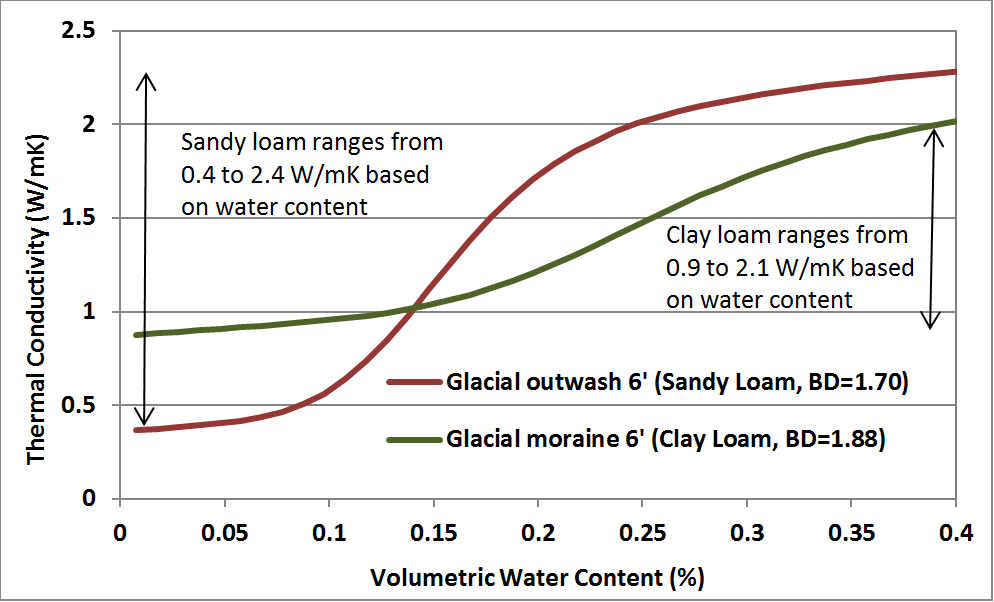 Figure 4. Graph of the relationship between thermal conductivity and water content for two commonly occurring glacial sediment types in Indiana (BD stands for bulk density, measured in grams per cubic centimeter). Geologic settings with sandy sediments can display very low or high thermal conductivity depending on the predominant moisture regime, whereas clay-rich glacial till shows less variation. The data used to make this plot were generated using laboratory measured dry and saturated thermal conductivities in conjunction with a mathematical model developed by Campbell (1985).

During GSHP system design, it is important to accurately estimate the range of thermal conductivity for sediments and/or rocks at a site. Required trench lengths for horizontal systems can vary significantly depending on the sediment texture and moisture content (figure 5).

Sediment and rock thermal properties are also affected by how tightly individual mineral grains are packed together (density) and the types of minerals contained within the geologic material (for example, quartz, feldspar, calcite). Increases in sediment bulk density typically result in higher thermal conductivity (fig. 6). In terms of mineralogy, quartz content has the most prominent influence on rock thermal properties owing to the notably high thermal conductivity of quartz relative to other common minerals (Robertson, 1988). GSHP installers can use this to their advantage by adding quartz sand grains to conventional grouts to create “thermal grout”, which is placed in the boreholes of many vertical systems to increase the efficiency of heat transfer from closed loop pipes to the surrounding earth. 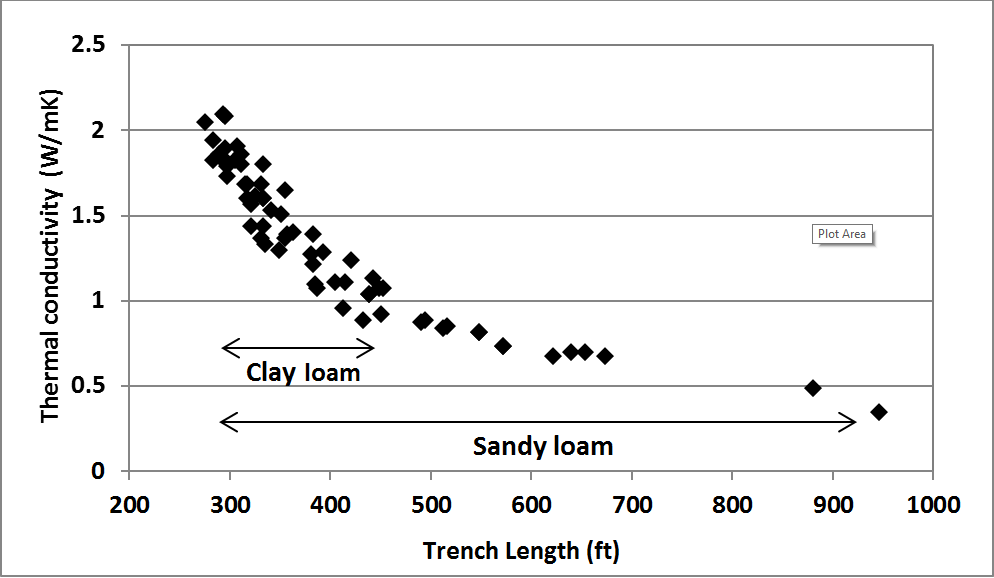 Figure 5. Graph of required trench lengths for horizontal GSHP systems as a factor of the thermal conductivity of sediments (length required to satisfy a 1.25-ton heating load). Arrows indicate the ranges in trench length that coincides with the ranges of thermal conductivities for two sediment types and moisture regimes shown in Figure 4. This graph was modified from Naylor and others (2011).

Vertical GSHPs, both open and closed loop systems, are typically installed within aquifers or saturated impermeable rocks and sediments that demonstrate favorable thermal properties (see Figure 3 for the distribution of known vertical GSHPs in Indiana). Thick unsaturated zones can exist where higher ground is underlain by limestone, and GSHP systems may be less efficient in these areas (Busby and others, 2009). This may partially explain the sparse distribution of vertical GSHP systems in the limestone-dominated highlands of south-central Indiana. 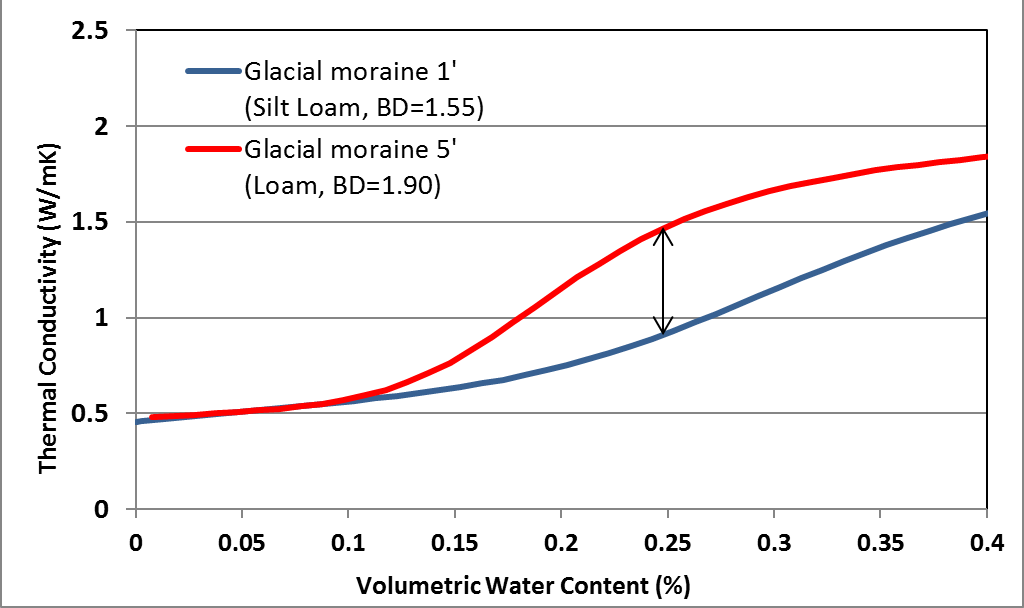 Groundwater flow can also affect the efficiency of GSHPs by moving heat toward or away from the ground-coupling component of the system through a process called advective heat transport. For single borehole systems, this is advantageous, because heat is transported away from the loop during the cooling phase (when heat is being moved from the building into the ground) and toward the loop during the heating phase. On the other hand, where several vertical boreholes are used as part of a larger loop field system, heat transfer via groundwater flow can be disadvantageous because thermal interference becomes an issue (Busby and others, 2009). The potential for both positive and negative system effects to arise from groundwater flow highlights the importance of considering advection during system design.

Open loop vertical systems rely on a pumping well that extracts groundwater, which remains at a near-constant temperature year-round. After the heat pump transfers heat to or from the extracted groundwater, the resulting water is often injected back into the underlying aquifer using an injection well. These systems are most effective where permeability is sufficient to allow water to be re-introduced into the aquifer.

Other sources of information