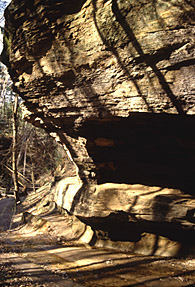 Time is usually difficult to define in the rock record. How long did it take to deposit the sandstone exposed in the cliffs of Turkey Run or the limestone exposed in the quarries around Bloomington and Bedford? One might just as well ask how long did it take to deposit all the sand in the Mississippi River or the carbonate sands of the beaches, shoals, and islands in the Bahamas or south Florida? The answer is thousands to tens of thousands of years.

To answer our original question then, each vertical millimeter of rock exposed in a quarry face or outcrop of sand represents a few thousand years, on the average. Does that mean then that each millimeter of fossilized shell of a trilobite or clam preserved in the limestone or sandstone deposit represents a thousand years of growth of the animal? Of course not, but this illustrates the problem with equating time and rocks.

Time can be thought of in the scale of the human life span, which is how most of us think of time. Or we can think in a more abstract scale on the order of millions or even billions of years, which is what we do when we think in terms of the evolution of the earth and our solar system. On a human scale 100 years seems like a long time and in that time a lot of clams will develop and die. But to a geologist, 100 years is an instantaneous, almost immeasurably small, amount of time. This is because geologists are rarely able to measure absolute time for an outcrop of rock.

Most typically, a geologist estimates the age of an outcrop of rock by looking at its fossils or by measuring the decay of a radioactive isotope. From these fossils and radiometric ages, she or he might be able to estimate how long it took to deposit the outcrop in question. However, most fossils typically existed as a species over thousands of years to hundreds of thousands of years. Horseshoe crabs have existed in some form for 300 million years.

Only rarely are geologists able to recognize deposits representing essentially instantaneous events (see Tidal Time). Such events might be an ash fall deposited from a volcano, or a deposit of sandstone that was laid down in a flood or blown in by a hurricane. Such deposits may reflect time intervals of only a few hours to days during which the sediment was deposited and before it was cemented. These rapidly deposited sediments may encase fossil of plants or animals that lived for finite periods of time ranging from weeks to years. However, between those times of deposition there may be long periods of no deposition. During such times soils may form, or the deposits may be eroded and removed leaving no trace of their existence. Thus the rock record is made up of episodes of deposition (some more rapid than others) punctuated by long periods of erosion or no deposition. This is why most geologists think in terms of average depositional rates of millimeters per thousands of years for any outcrop. They recognize that a single grain of sand or a layer of sandstone may have been deposited in a very short period of time but when one considered the entire outcrop it likely took a very long time to deposit the entire thing.