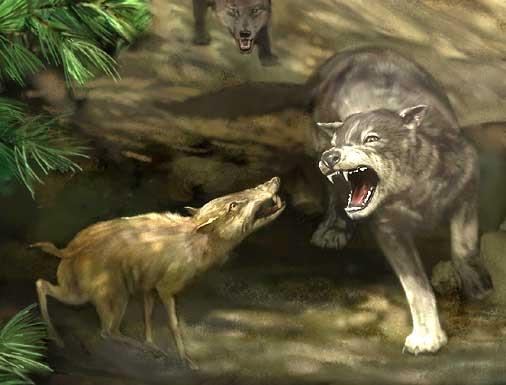 Life reconstruction of Dire wolves and a peccary from Magenity Cave, Indiana (from a painting by Karen Carr, ® Indiana State Museum).

An icon for fans of the Grateful Dead and adventure gamers, the Dire wolf has howled its way from the late Pleistocene to popular American culture. Canis dirus was a large relative of the modern Gray wolf, part of a radiation of dogs that began about 5 million years ago and flourished during the Pleistocene and includes living gray wolves, coyotes, jackals, African hunting dogs, and dholes. Dire wolves have been found as fossils across North America from southern Canada to Panama and into the northern part of South America, where they lived alongside their cousins the gray wolves for most of the last half million years.

Like the Sabertooth cat, the Dire wolf is one of the best known Pleistocene mammals because of the tremendous number of skeletons found in California at the Rancho La Brea Tar Pits, where more than 200,000 specimens have been recovered. On average, Dire wolves were considerably larger than their modern relatives, weighing between 60 and 68 kg (130-150 lbs) compared to 45 kg (100 lbs) in the Gray wolf, 30 kg (65 lbs) in the Red wolf, and 14 kg (30 lbs) in the Coyote. The teeth of Dire wolves had more specializations for meat eating than do modern wolves, and the proportions of Dire wolf legs were more massive. The typical prey of Dire wolves probably ranged from 100 to 299 kg (220-660 lbs), which is the range from a very large pig to a medium-sized moose. While they probably took even larger prey, Dire wolves would have supplemented their diet with smaller animals like the extinct peccaries with which they are often found in the fossil record. Their hunting behaviors and social structure were probably much like modern wolves.

The Dire wolf is well known in Indiana: the first fossil remains were recovered in 1854 from the Ohio River terraces near Evansville by Francis Lincke. The species was later described by Joseph Leidy of the Philadelphia Academy of Sciences based on Lincke's Indiana fossils. At least three sites in Indiana have produced specimens of Canis dirus--the Evansville site and ones in Monroe and Crawford Counties - and it is known from all the surrounding states except Michigan.