Reflection Seismic Profiling of the Wabash Valley Fault System in the Illinois Basin by R.M. René and F.L. Stanonis

Note—only the abstract and introduction of this 33-page report are reproduced here. To obtain the complete report, go to the U.S. Geological Survey site.

Three common-depth-point (CDP) minihole reflection seismic profiles were recorded in southwestern Indiana near the junction of the Wabash and Ohio Rivers. Our objective was to image and interpret the deep structure of the Wabash Valley fault system in the Illinois Basin. The normal faults of this system are Late Pennsylvanian or younger and pre-Pleistocene in age. The seismic data were processed through CDP stack, wave-equation migration, and time-to-depth conversion. These data image the Wabash Island and Hovey Lake faults, which bound the Mt. Vernon graben in Posey County, Indiana. Northwest of Hovey Lake, the Wabash Island fault comprises several branches in a quasi-planar fault zone that dips about 65° east-southeast. Vertical displacement on the floor fault increases with increasing depth and is about 120 m at the Upper Cambrian Eau Claire Formation. Vertical displacement on the roof fault decreases with increasing depth. Northeast of Hovey Lake, we interpret that the Hovey Lake fault is a subsidiary antithetic fault to the Wabash Island fault. The fault is listric, and vertical displacement of strata decreases with increasing depth, although the fault clearly displaces the Eau Claire Formation. The Hovey Lake and Wabash Island faults apparently intersect within the Precambrian basement rocks. Two hanging-wall synclines and an anticline in the Mt. Vernon graben result from reverse and normal drag folding associated with the two bounding faults.

A strong reflection seismic event is interpreted as the response to a low-velocity layer of approximately 200-m thickness within the Upper Cambrian Eau Claire Formation. Our interpretation of the transit-time interval between the Eau Claire and acoustic basement events is consistent with the possible existence of an Upper Cambrian Mount Simon Sandstone basin extending into southwestern Indiana on trend with the Reelfoot rift of the New Madrid rift complex. We do not, however, see evidence of pre-Mount Simon rift-fill associated with any large-displacement basement faults that may have been reactivated to generate the Wabash Valley fault system. 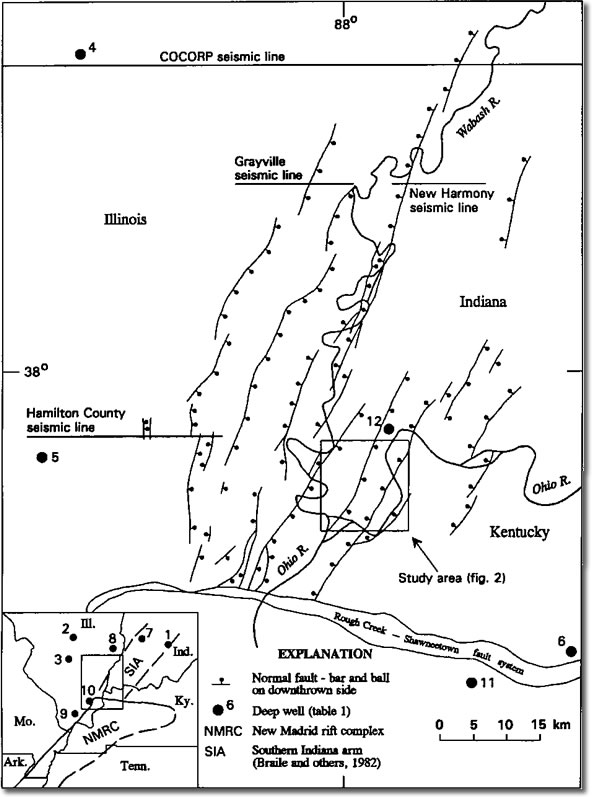 Figure 1.
Map of the Wabash Valley fault system showing our reflection seismic study area and the COCORP, Hamilton County, Grayville, and New Harmony seismic lines. The: (1) Brown, (2) Weber-Horn, (3) Johnson, (4) Cisne, (5) Cuppy, (6) Bell, (7) Rollison, (8) Lewis, (9) Farley, (10) Streich, (11) Duncan, and (12) General Electric wells are shown. The inset map shows the New Madrid rift complex and its Southern Indiana arm as postulated by Braile and others (1982). The small box within the inset map shows the area of the main map. Modified from Nelson (1990a).

In 1988–90 we shot three reflection seismic profiles across faults in the Wabash Valley fault system to study these faults and deep structures of the Illinois Basin. This fault system is about 90 km long and 50 km wide in southeastern Illinois, southwestern Indiana, and northwestern Kentucky near the deepest part of the Illinois Basin (fig. 1). The high-angle north-northeast- to northeast-trending normal faults of this system displace the youngest consolidated strata (Upper Pennsylvanian Mattoon Formation) but not the overlying Quaternary deposits. These faults are thus Late Pennsylvanian or younger and pre-Pleistocene in age. The maximum vertical displacement on an individual fault is about 145 m (Nelson, 1990a); however, the faults commonly bifurcate upward (Bristol and Treworgy, 1979; Ault and Sullivan, 1982). The faults and fault-related structures of this system partially controlled deposits of oil and gas in Mississippian and Pennsylvanian strata (Bristol and Treworgy, 1979) and may have controlled accumulations of deeper, undiscovered hydrocarbons as well. These structures also affect mining of Pennsylvanian coal deposits (Nelson, 1981) and locations of waste-disposal wells. Seismicity in the area may be related to zones of crustal weakness associated with these structures.

We shot seismic lines 1–3 (fig. 2) across the Mt. Vernon graben, bounded by the Wabash Island and Hovey Lake faults in an area of low relief near the intersection of the Ohio and Wabash Rivers in southwestern Indiana. Figure 2 shows structural contours for the top of the Upper Mississippian Cypress Formation based on oil-well data. Anticlines F, G, and H (fig. 2) helped trap oil in Mississippian strata in the College Consolidated, Spencer Consolidated, and Powells Lake Consolidated fields, respectively. Although deep wells in the Wabash Valley fault system are sparse, wells less than 1 km deep are plentiful. In areas of oil and gas production, wells are spaced at about 200-m (660-ft) intervals. The steeply dipping faults are intersected by these wells sporadically along the direction of strike, but, because the faults commonly bifurcate, reliable determinations of fault dips may be impossible using shallow wells alone. In Posey County, Indiana (area = 1,060 km2), which includes the study area, Tanner and others (1980a, 1980b) mapped fault cuts with missing sections in 207 wells. The deepest of these fault cuts was 702 m below sea level in Mississippian strata. Many authors, including Butler (1967), Tanner and others (1980a, 1980b, 1981a, 1981b), and Ray (1986), have used well logs to map structures and thicknesses of Mississippian and Pennsylvanian strata in the study area. The faults have been only slightly exhumed. Coal-seam moisture content in the region indicates that only about 300 m of Late Pennsylvanian or younger strata were removed by erosion (Cluff and Byrnes, 1990). 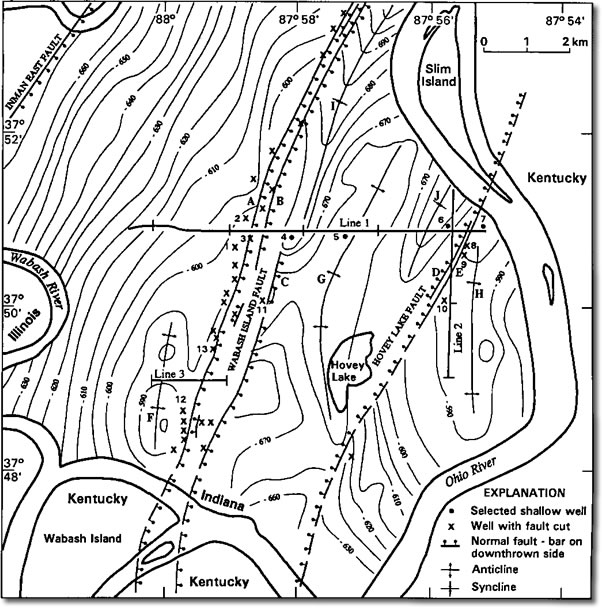 Figure 2.
Map showing seismic lines 1–3, with section-line indicia at 1-mile (1.6-km) intervals. Wells with fault cuts, wells 1–13, faults A–E, anticlines F–H, synclines I–J, and structure contours (in meters) at the top of the Cypress Formation (Upper Mississippian) are shown. Lines 1a and 1b (see text) overlap and were processed together as line 1. Line 1a extends eastward from the west flank of syncline J. Line 1b extends westward from a point near the axis of syncline J. Datum is mean sea level; contour interval is 5 m.

Seismic lines 1–3 were acquired by students under our direction as part of a field course in seismic exploration at the University of Southern Indiana during the summers of 1988-90. The data were recorded digitally with SERCEL SN338B and SN338HR recording systems and were processed by us at the data-processing facilities of Digicon Geophysical Corp. in Houston, Texas. Although the resultant seismic profiles are short, they successfully imaged faults and fault-related structures of the Wabash Valley fault system at depths as great as 4 km. A strong reflection event in these data is correlated with the Upper Cambrian Eau Claire Formation. From these seismic data, we derived tentative estimates of thickness for the Upper Cambrian Mount Simon Sandstone that are consistent with the possible existence of a basin in southwestern Indiana. The acoustic basement event, due perhaps to the interface between the Mount Simon Sandstone and underlying Proterozoic rocks, is only weakly defined. We did not observe in our reflection seismic data direct evidence for a previously postulated pre-Mount Simon rift in this region.

References Noted in the Introduction: