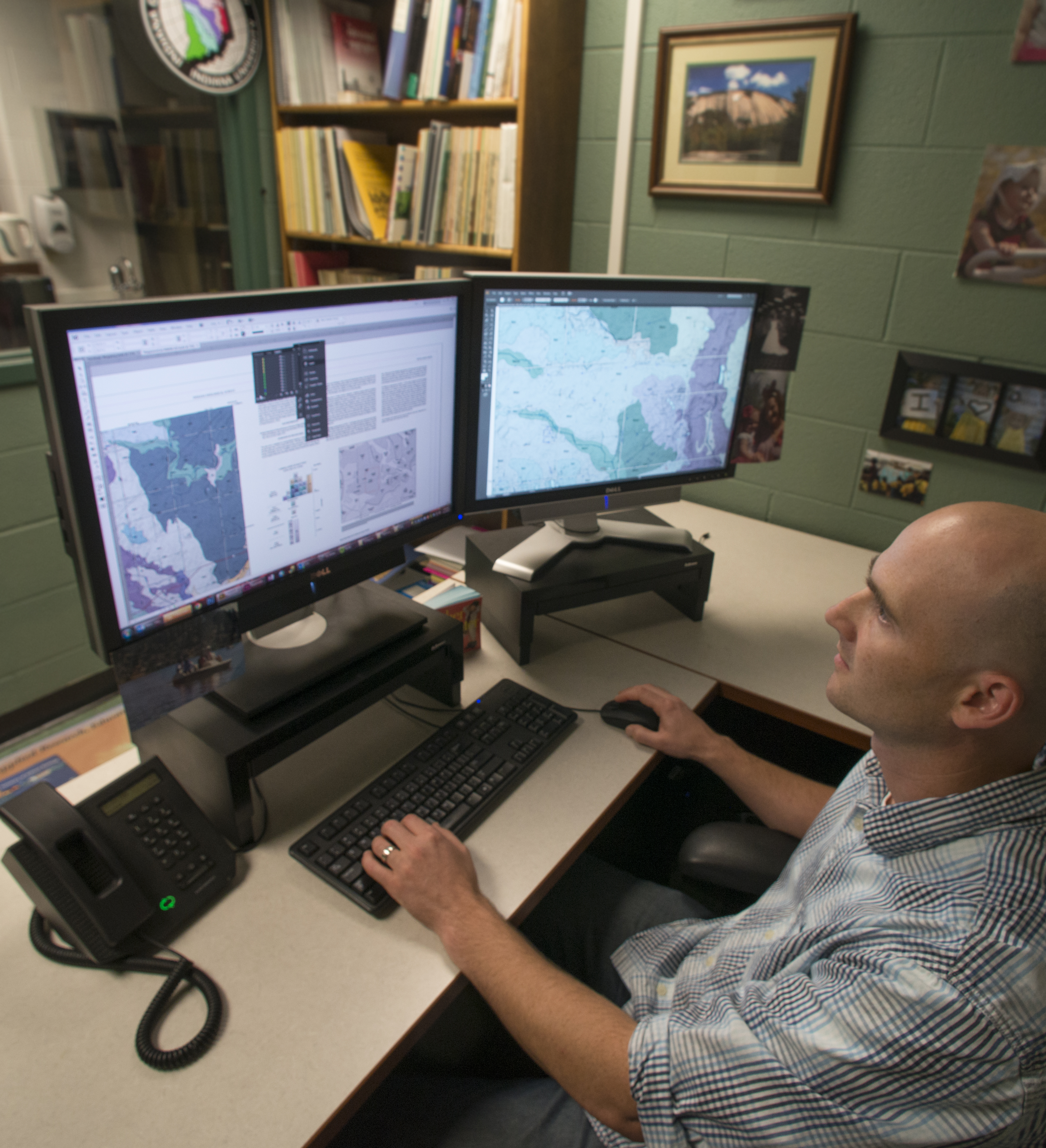 Cartographer Matt Johnson has spent his career showing people the way to go, but as a college student 20-some years ago, he, too, wandered a bit.

He started as a computer science major, but dropped that for recreation management because he didn’t want to sit at a computer his whole life. One required course was geography, and there, Johnson found “the best thing I could possibly do”—because he didn’t have to study; the subject came easily to him. But he had no idea what to do with an interest in geography.

A professor at Appalachian State University, Neal Lineback, needed someone to create maps for news articles he was writing. So, Johnson was trained as a cartographer. That led to paid internships with Maps.com in California, then eight years creating trail maps for National Geographic Trails in Colorado.

In 2011, Johnson landed at the Indiana Geological and Water Survey. Since then, he’s created dozens of maps with data gathered from IGWS geologists and other sources. In 2020, he won the Excellence in Cartography award from the IMIA (International Map Industry Association) and Esri ICA (International Cartographic Association) for a Quaternary geography map of the Elkhart area. Then, his topographic trail maps were included in Esri’s 2021 Map Book, which shows “how the application of GIS is creating positive outcomes in organizations and across society.” 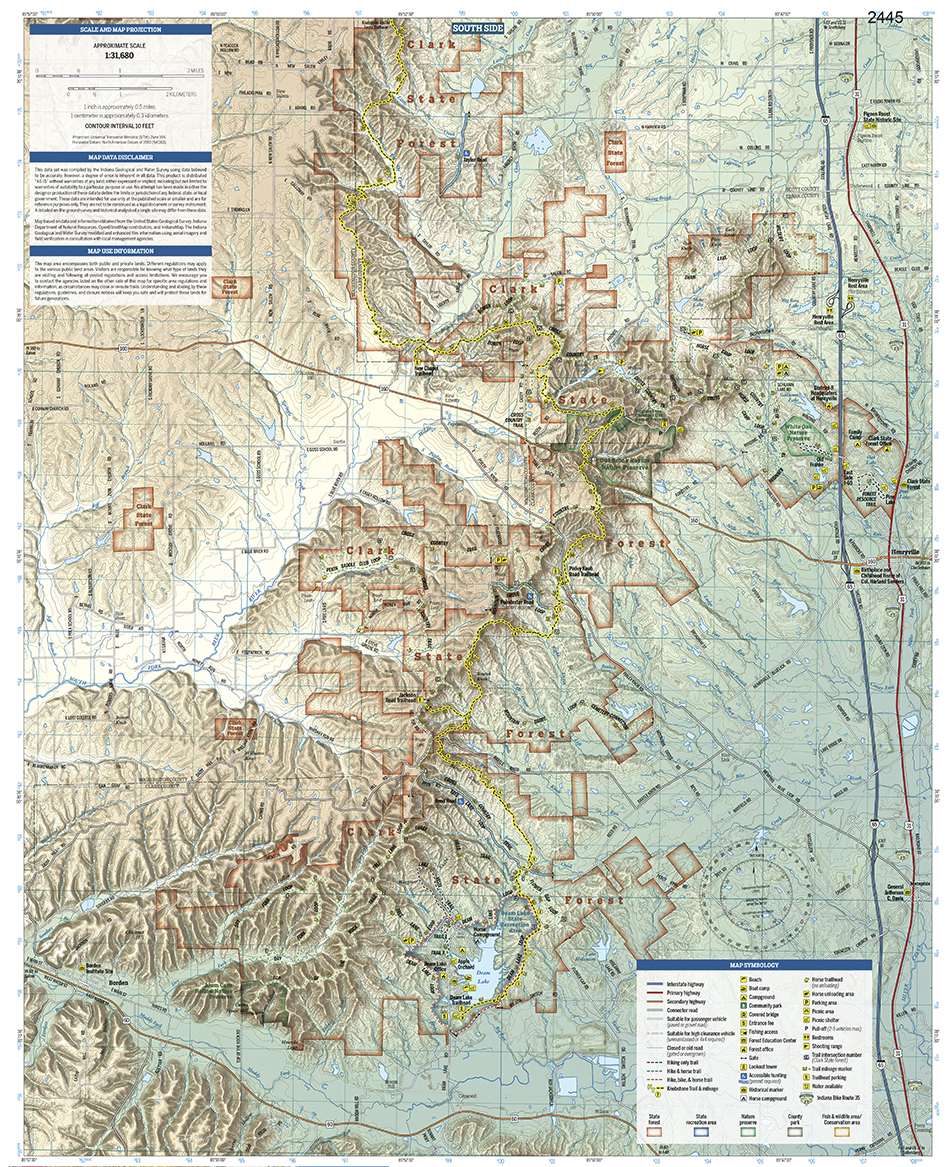 Johnson discussed how he made them during an IGWS Dig Deeper webinar on Dec. 16, 2021 (archived here). The project was partially funded by the IU Center for Rural Engagement.

An avid hiker, Johnson knew the limitations of existing trail maps. Trails may have been classified on a scale from “easy” to “rugged,” but those maps did not show elevations, and sometimes did not show accurate distances or late-added offshoots. They were useful, though, to show the location of major features like campgrounds, some roads, and trailheads. Other data for the new maps was pulled from aerial photos, the U.S. Geological Survey, county maps, OpenStreetMap, and from hikers.

“One of the big things I found out through the pandemic was how willing people are to help out,” Johnson said. “I’d post a photo on Facebook of an area I didn’t know and say, ‘Has anyone hiked this?’ and people would comment and say, ‘Oh yeah, I did, and here’s what I know,’ or, ‘Nope, but I’ll go hike that tomorrow and let you know.’

“I told (one volunteer), ‘Can I have your job, that you can just go hiking on a whim?’ So, that was nice to be able to have citizens who want to use the map actually help create the map.”

The IGWS gave 10 free maps to businesses or visitors’ centers near the trails and allowed those places to sell them at the $15 retail price, so businesses wouldn’t have to take a gamble during COVID times on something they weren’t sure would sell. Many outlets quickly sold out, then came back to buy more copies, as the pandemic had prompted people to get out in the woods. 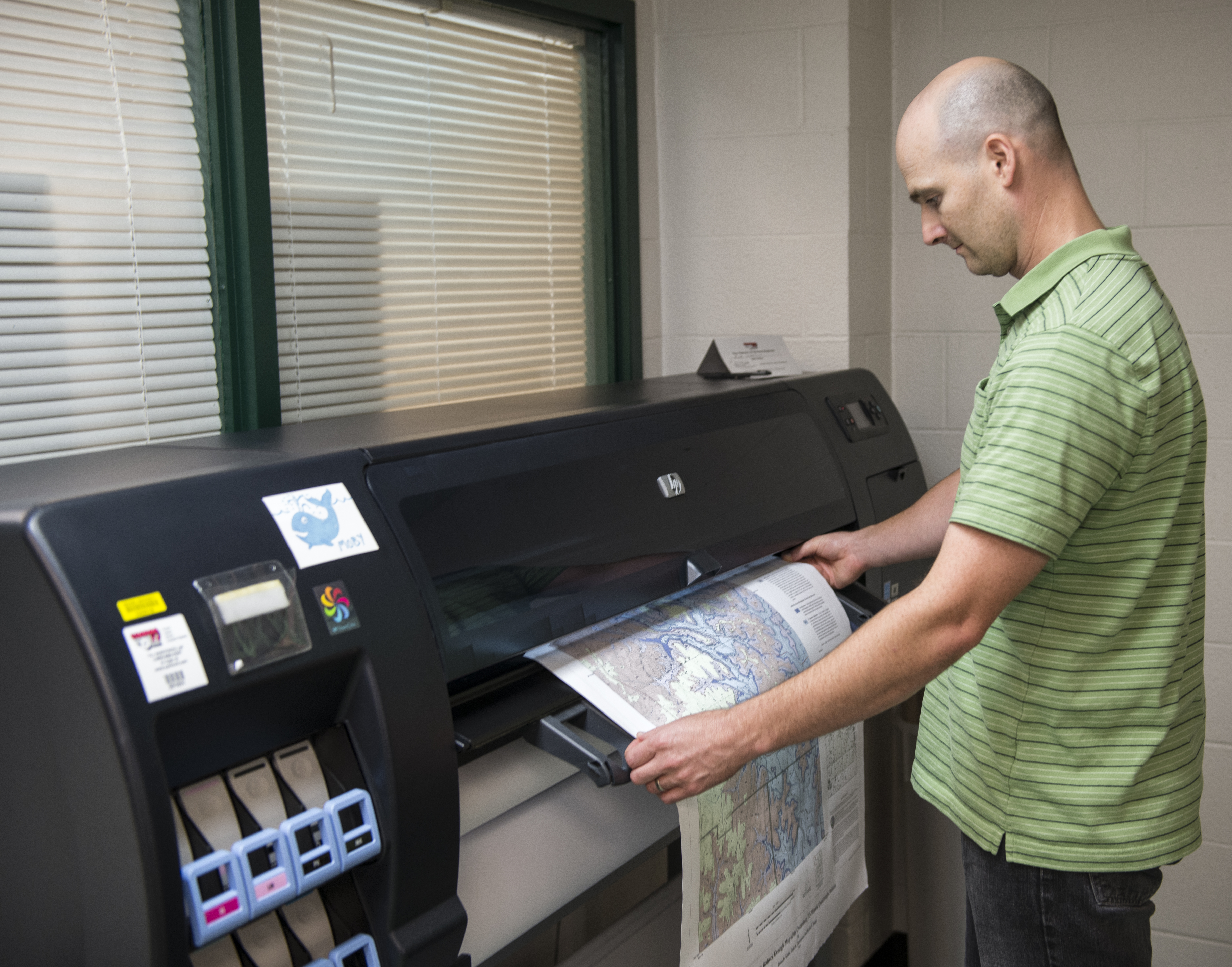 Johnson is still getting questions about when the next trail map is coming. He has a new job now—as director of information services for the IGWS—which takes time away from cartography. But the project has “definitely not fallen to the wayside,” he said.

He remembers being the navigator on family road trips, planning routes through blocks of green on the map and anticipating what they were going to find along the way. When people ask what he does as a cartographer since “everything’s already been mapped,” he tells them, no, everything hasn’t.

“Trails change. Things get closed … and they have to be removed from maps, so, things change all the time. And a lot of times, you still need a paper map, because you won’t always have cell service, batteries die, a lot of different things could go wrong. Geology-related, though, we’re still mapping areas that have never really been mapped in the state. It could be minerals, it could be water resources, certain bedrock horizons that are becoming important because of changing needs in the state.

“So, mapping is never going away. There may just be newer ways of doing it faster.”