What could studying fossilized shark teeth from Florida tell us about water quality in rural Indiana?

With newly acquired research tools, IGWS research scientist Tracy Branam can do a chemical analysis of those shark teeth to learn why groundwater in some Indiana wells has elevated fluoride—in some places, exceeding the drinking water standard by almost four times. He’s long had a theory about the water chemistry, but not the data to test it.

The water lab’s new Metrohm 919 IC Autosampler plus autotitrator can provide such data. It’s one of four new pieces of equipment installed recently in two IGWS labs, reducing the amount of analysis that needs to be outsourced and increasing the investigatory capacity of IGWS scientists. 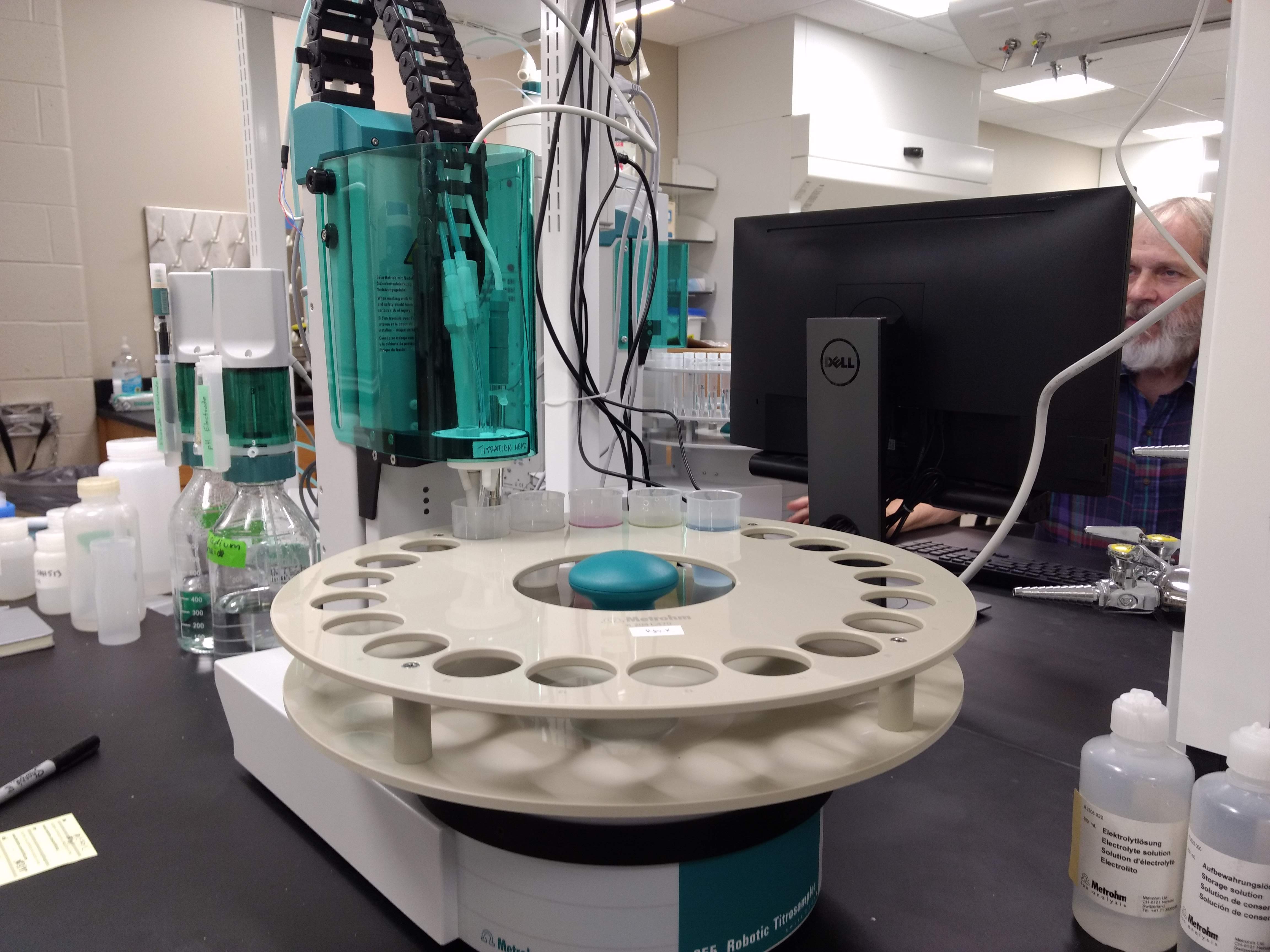 The autotitrator is replacing a manual titrator that worked only sporadically in recent years. It measures alkalinity—amounts of carbonate and bicarbonate—in water samples, as well as water hardness, and fluoride levels. A titrator can measure acidity as well; the old one was used for analyzing acid mine drainage waters.

Fluoride and ion exchange was going to be the subject of Branam’s Ph.D. dissertation years ago; he’s still working on it in the background. That’s why he’s been gathering fossilized shark’s teeth and grinding them up, to test his ion exchange theory. “It gives us an idea of how the process of getting elevated fluoride occurs here in Indiana,” he said. “…. Over in the western part of the state, shallow bedrock aquifers are primarily calcium bicarbonate water. As you get deeper, the groundwater becomes predominantly sodium bicarbonate. Once you lose the calcium, the bicarbonate can really ramp up, because calcium puts a limit on how much carbonate you can get into solution. But once you lose calcium, all of a sudden you’ve got naturally soft water, sodium bicarbonate, and the levels of bicarbonate really go up … and as water supply wells become deeper, the pH goes up, and once it goes up to about 8.4, all of a sudden fluoride appears.”

He also was planning to collect cores to see if they contained shark’s teeth, since Pennsylvanian bedrock from that part of the state would likely be marine shales and siltstones. Water sources found in such rock are likely to be low yield, “but it is interesting that we have this phenomenon,” Branam said. Excess fluoride can mottle the teeth, but in greater amounts, it also can weaken and deform other bones, he said.

The water lab also received an ion chromatograph in July. It can check water samples for levels of anions, such as sulfate, nitrate, nitrite, chloride, and fluoride, as well as cations like magnesium, calcium, potassium, ammonium, sodium, and lithium, based on changes in their conductivity. This is the first time an IGWS lab has been able to run these tests since about 2010 when a less sophisticated, anion-only machine became obsolete and was decommissioned. In the meantime, samples were sent to outside labs for analysis. The ions analyzed using this instrument will provide what is known as the prevalent chemical character of a water source, “which is just a scientific way of saying what the dominant chemical components are in the water,” Branam said.

He anticipates both alkalinity testing and ion analyses to be used for the Indiana springs project, which is tracking the quality of dozens of springs on public and private land. Information about the hardness or softness of water also is of interest to anyone who owns water-using appliances and wants to extend their useful life. Branam said the new equipment will be a major component of a planned program to map the availability and quality of groundwater throughout the state as well.

The IGWS energy lab also has two new analysis tools. The lab received an ASAP 2020 Plus Automatic Micropore Physisorption Analyzer earlier this year, replacing a 19-year-old unit that had stopped communicating with the computer receiving the data. The IU Office of the Vice Provost for Research purchased the unit and the IGWS provided matching funds.

The ASAP 2020 provides data on the porosity of sedimentary rocks. “Some rocks with high porosity serve as reservoirs for water and other fluids; others with minimal porosity function as seals, confining and isolating fluids in reservoir rocks,” explained research geologist Maria Mastalerz. It’s important to know about a rock type’s ability to store and transmit fluids when studying groundwater aquifers and oil and gas reservoirs, she said.

The other instrument the energy lab received is a carbon analysis coulometer obtained through a U.S. Department of Energy Basic Energy Sciences grant. It’s so new, IGWS researchers are still testing the instrument and training on it. The coulometer flushes a sample with acid, turning all carbonates, carbonic acid, and bicarbonates into carbon dioxide and water; then, the CO2 is measured. This equipment is designed to measure inorganic carbon and will be used in combination with a Leco carbon and sulfur analyzer to determine the levels of organic, inorganic, and total carbon in pulverized rock samples.

Carbon content informs researchers about the amount of organic matter in the rock which could be converted to hydrocarbons. Measurements of organic carbon vs. sulfur in a rock sample also point to the conditions of the environment in which that rock was formed, such as marine or terrestrial. Such data are important in sedimentology and stratigraphy research and in efforts to reconstruct paleogeography of the past.