Editor’s note: The E-Geo News has been walking readers through the various steps required to turn physical data such as core samples into a functional geologic map. This is the third installment in this series; core collection was covered in September and core describing in November.

In a corner of the third-floor lab, a heavy shelving unit near the freight elevator is nearly full with core boxes. Each day, laboratory technician Katherine Tucker selects a box to start with—she could go through as many as five in a day—to document details that will aid geologists in discerning one type of bedrock from very similar-looking others.

One of her tools is a camera rig; the other is a specialized X-ray machine called the pXRF (portable X-ray fluorescence spectroscopy).

Tucker photographs each box of rock samples in controlled light conditions alongside a color bar and a ruler for scale. Photos are uploaded to IGWS Digital Collections to make it possible for anyone in the world to see what the Survey has sampled. IGWS geologists will take those photos and match them up with chemical composition readouts which come from pXRF testing on the same samples.

In the next room, Tucker places a bedrock sample over the 8-mm hole in the pXRF test window. The controlled X-ray aimed at it will cause fluorescent X-rays to beam off the material; a computer program determines the elemental composition of each sample based on the “fingerprint” the rays put off. 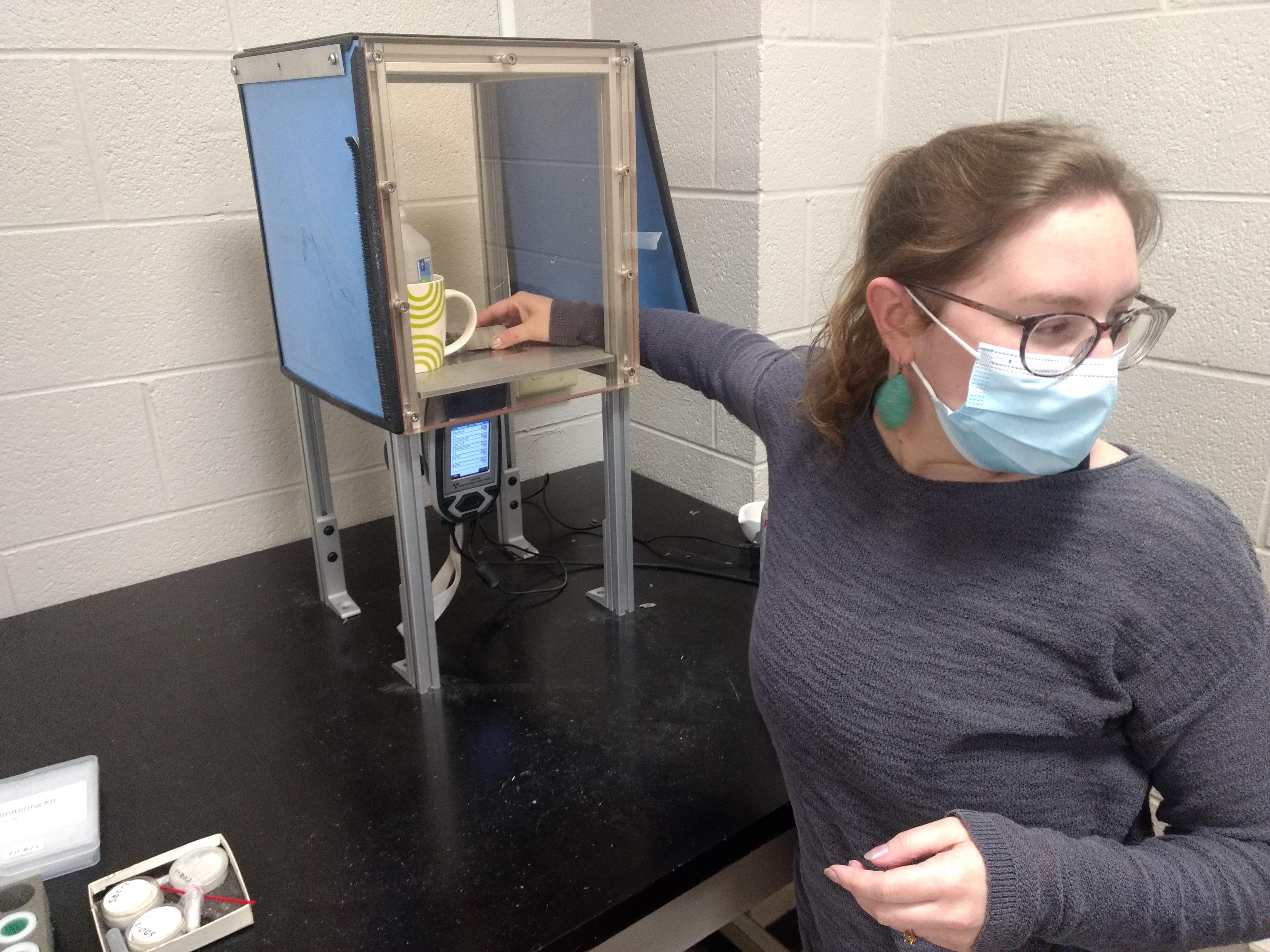 PXRF does not read whole chemical compounds, like CaCO3 (calcium carbonate, or limestone); it reads certain elements, like the calcium. It is able to measure dozens of elements in parts per million, but Tucker tracks just 20, in particular groups, in a spreadsheet. She’s looking for shifts in intensity in one or a group of elements over the depth of the core.

“So, this core was weird because we have a very large, relatively speaking, chlorine signature,” she says, pointing at the readout on the screen. “Chlorine is not common in the rocks that we have around here, and normally what it means … is somebody went a little crazy with the hydrochloric acid when they were running samples (doing tests at the describing stage), because the hydrogen will evaporate but the chlorine will not. But these are way too high and way too scattered to be that, so we have a bit of a mystery. It could be deposits left behind when there used to be a big saltwater sea here, or it could be something else. It’s unknown.”

When there’s a point in the core when geologists aren’t sure what they’re looking at, Tucker might take samples closer together than every foot to give them more data to work with. “Most people, what they’re looking for is a stratigraphic range of information”—for instance, data markers that would help determine if a piece of limestone is from the Paoli Formation or the Ste. Genevieve Formation within the Blue River Group.

Tucker is neither a chemist nor a geologist; she holds an English degree from Ohio University. She picked up this hourly job in July 2020 when her now-husband was getting his Ph.D. in chemistry. Yet, she knows the machine and the process, and the data she provides to geologists—to her co-workers and to outside companies seeking analysis—can be a key factor in helping to resolve geologic questions.

PXRF, though, is not a diagnostic tool; it is an exploratory tool, Tucker stresses, and, ideally, one of a suite of tools a geologist could use to determine what, exactly, they’re looking at. Other tools geologists could use in-house include heavy liquid separation (to isolate and identify microscopic fossils only found in certain ages of rock), or optically-stimulated luminescence (OSL) dating (which we explained last year). Tests geologists could run elsewhere include X-ray diffraction (examining the crystalline structure of compounds in a sample), ICP-MS (inductively coupled plasma mass spectrometry, incinerating a sample and reading the heat signature as elements disintegrate), or carbon isotope sampling (determining a biosignature by measuring the amounts of three types of carbon present).

Every box of core goes through the photography station, and all boxes of bedrock core for STATEMAP projects pass through the pXRF room, plus any requests from outside companies, keeping Tucker constantly busy.