Discoveries at a drill site by Sara Clifford

Swatting back sweat bees near the only shade around – an open truck cap – geologist Don Tripp sprays down a box of fresh core samples. Moments ago, these cylinders of bedrock were pulled from the ground and into the sun for the first time in millions of years. Tripp gently washes away the silt and sand, revealing color undulations, embedded fossils, and other fine details that are clues to determining the age and name of each layer of rock.

“This is a good box. This is a good one,” he says in a slightly awestruck way, even though he’s been doing this same sort of work for five years. Among the 10 linear feet of rock, he points out a coal seam, some pyrite, a clearly defined gastropod fossil, and a “rare occasion” of carbonate rock bumping up against Raccoon Creek sandstone – likely the unconformity they’ve been looking for that will help him determine where the Mansfield Formation (Pennsylvanian Age) ends and Mississippian-Age rock layers begin. 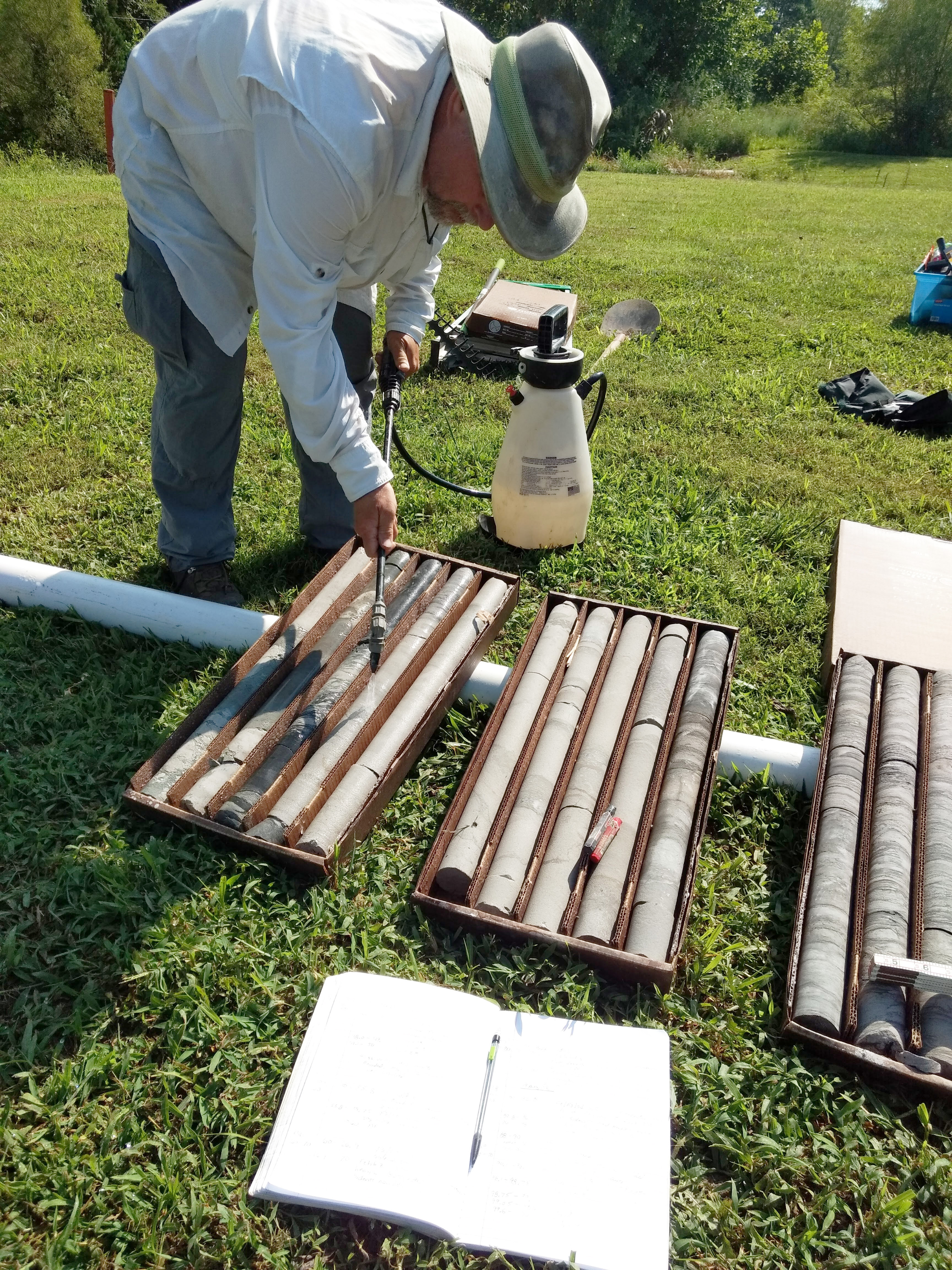 Tripp and fellow IGWS geologists Isaac Allred and Valerie Beckham-Feller will be working over the next two years to create an updated bedrock map of the Jasper quadrangle for STATEMAP, a program of the U.S. Geological Survey. Collecting and analyzing 2,426 feet of core from 14 drill holes, as well as visiting outcrops where rock layers are visible above ground, will give them new data to add to what they’ve learned from old maps, commercial well logs, previous survey drill holes, and industrial mineral reports.

The Jasper team is drilling in this area to confirm or correct stratigraphic data that was last mapped as many as 70 years ago, or to fill in geographic gaps where no data exists. Historical data often comes from the oil and gas or commercial stone industries. This area, where oil isn’t plentiful and the most valuable Indiana limestone isn’t present, has been passed over for detailed data collection by most everyone but research geologists.

Bedrock theoretically shouldn’t change much since it’s hundreds of feet below the surface. However, maps are only as good as the data upon which they are based, and geologists can’t realistically collect cores everywhere to perfectly map underground surfaces, Tripp said. “A lot of the data I’ve seen was just pretty much assumed (via correlations using data points in other areas), and what was done – what a lot of geologists do – is when you don’t have data, you just make a rough estimate. So, right now, we’re trying to take that estimation out of it.” 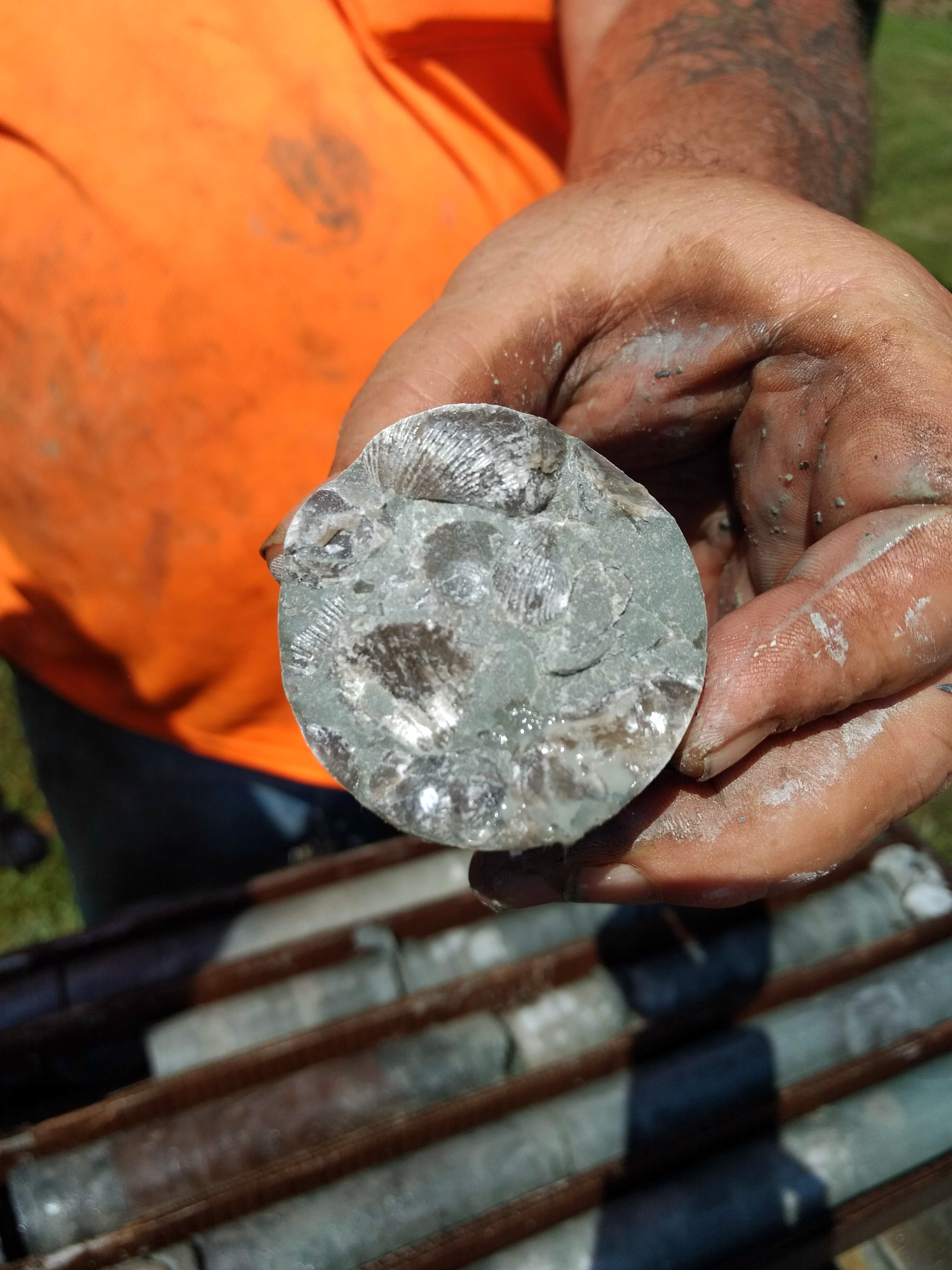 For this map, the new data points will vary between one-half and 10 miles apart. The closer-together ones are near Fredericksburg where this team is also trying to determine if a fault exists, perhaps related to the nearby Mt. Carmel Fault.

Once drilling concludes, Jasper team members will pull out their notes to compare what they saw in the cores, discuss theories about what the puzzling pieces could be, and submit samples for portable X-ray fluorescence (pXRF) testing which will give a readout of the chemical composition of the elements in the rock to help answer any lingering questions.

The owners of the properties where the core was drilled will get this data, too. That’s something Tripp gets a kick out of, sharing his passion for geology with people who might never have thought about it and showing them the neat things that exist literally in their own backyards.

At this hole, a neighbor ducked under the fence and wandered over to the rig, talking with senior driller David Dunaway from Strata Group and with Tripp. “Just being nosy,” he said as he scanned the boxes of core and listened to Tripp explain what he saw. “Pretty cool,” the neighbor said. “Maybe you’ll all find something we have that’s worth something!”

Those are the prevailing moods Tripp has encountered in the field: curiosity and kindness. He rarely gets a flat-out “no” from a landowner; many of them are excited to learn what he finds and he’s happy to give a Geology 101 lesson. Once, a student collected soil samples alongside the crew for a science project. At another house, Tripp answered geology questions from an inquisitive dad for 45 minutes, and his kids, playing with dinosaur toys, enjoyed an educational packet from IGWS outreach. Near Odon, the geologists and drill crew were treated to a picnic lunch from an Amish family.

“I make sure I tell them we’re with Indiana University,” he said about approaching landowners. “Nine times out of 10, aside from some Purdue vs. IU jokes, as soon as I say, ‘IU,’ they roll out the red carpet: ‘Where would you like to drill?’”