Editor’s note: In the September E-Geo News, we described the process of core being pulled out of the ground near Tell City to collect data for the STATEMAP program. Over the next few months, IGWS staff will explain the various steps required to turn that data into a functional geologic map.

It’s sunny outside, and he’s indoors, but geologist Don Tripp is zipping into a rain jacket with an apron over the top. He plucks a cylinder of rock from a box and lines it up on the steel table, double-checks his earplugs, and pushes “on.” Within seconds, a diamond blade has split the cylinder into two long halves. After a rinse from the saw’s water spray, Tripp can see details on the smooth, newly cut surface. “Look at the cross-bedding on this one!” he calls to two colleagues in the hallway. 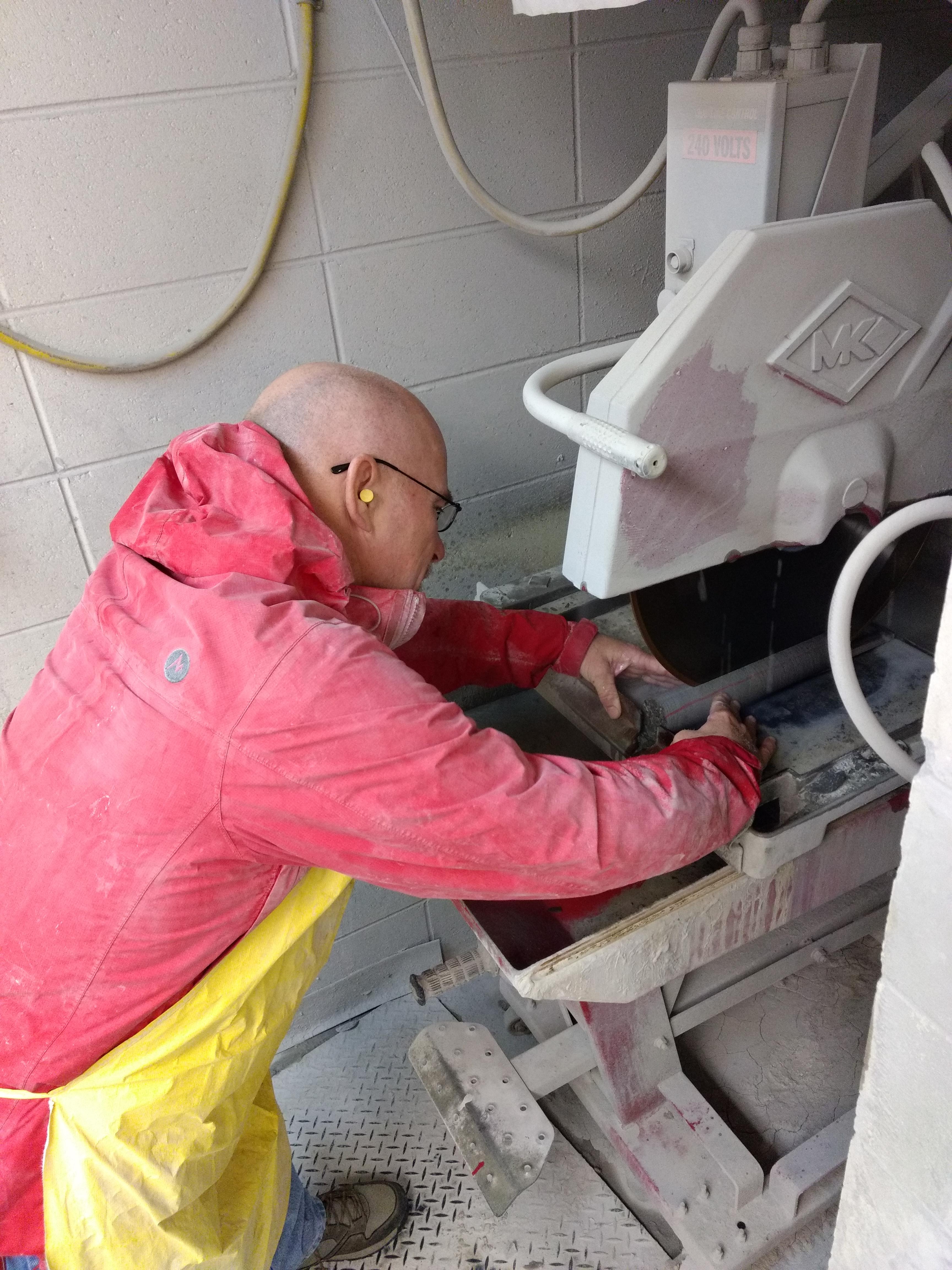 In late summer, Tripp, Valerie Beckham-Feller and Isaac Allred were working with drilling company Strata Group to collect core from near Tell City. Their ultimate task is to create a bedrock map of the Jasper quad, which includes this area. Now, those 19 or so boxes of bedrock samples are stacked in the hallways of the Geologic Materials Testing facility (GMT) queued for cutting.

Some already-cut boxes have been lined up under the fluorescent lights of the describing table. There, Tripp, Beckham-Feller and Allred are making meticulous observations, foot by foot, about what they’re seeing on the cut surfaces: color, texture, pits, bedding, seams, etc. They’ll all compare notes every few boxes to see where they agree and where they don’t. At places of uncertainty—and there are several from this particular hole—they will wait for chemical analysis data before deciding how to officially describe that length of core.

Other contributing data will come from the team visiting outcrops—places where rock layers are visible above ground—later this month, and possibly from other sources, like legacy maps done by other researchers decades ago, other state agencies, or paper well log records stored in the IGWS basement. 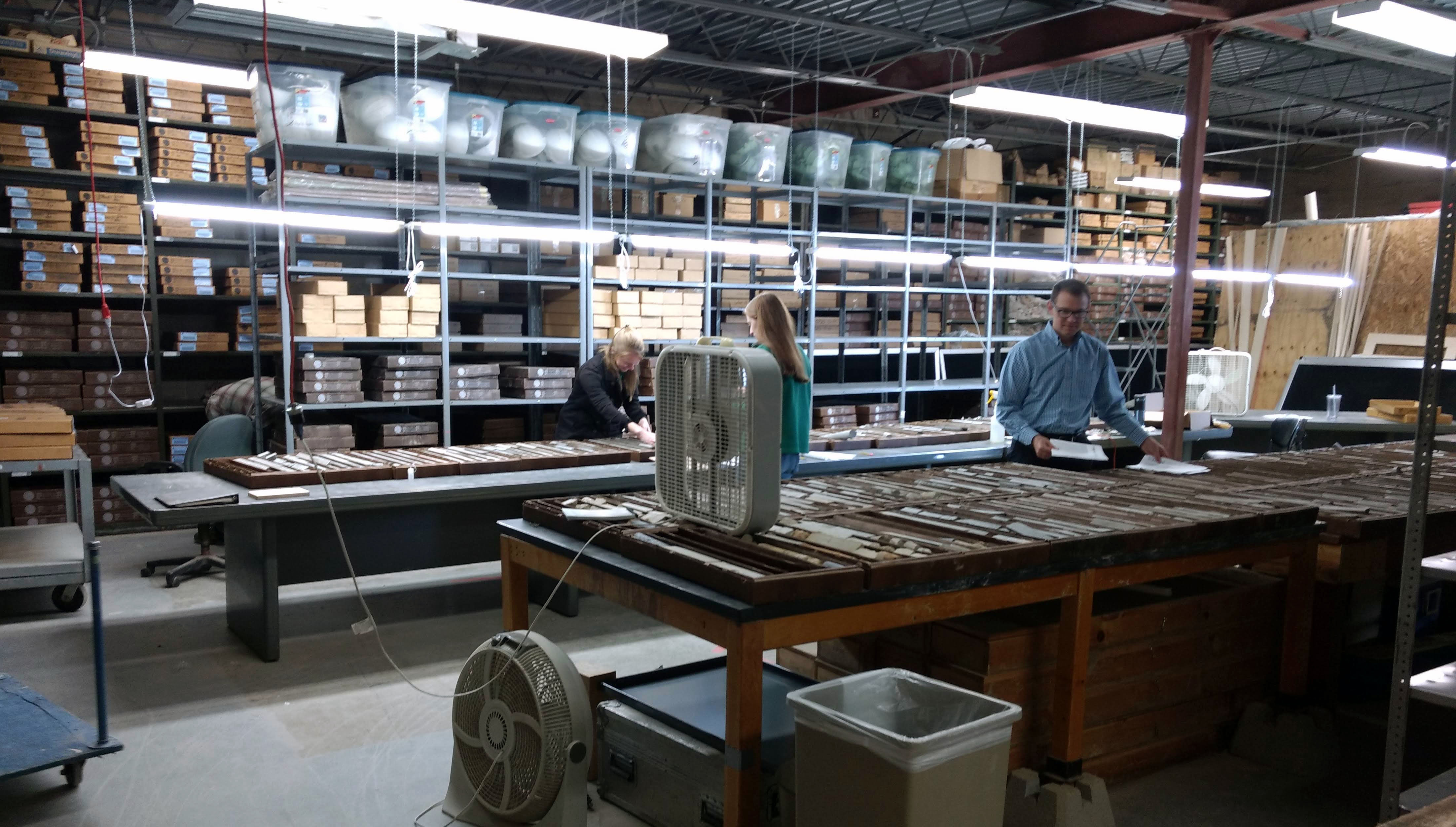 These core samples from the Tell City area are perplexing because they were gathered from a region where little historical data existed. It’s exciting to be a pioneer, but can be tedious and a little frustrating, too, Tripp admits. He can only spend a couple hours at a time at GMT poring over a puzzling core before he needs to walk back to his office in the main building and ponder something else.

The Jasper team anticipates being in the field-surveying and core-describing stage for at least the next month; actual map-making likely won’t be able to start until spring. “Right now, we’re doing the overall general survey work (finding outcrops in the field) … the major ones, looking at specific contacts … and then after we do our first round, we’ll reassess, refocus,” Beckham-Feller said.

Meanwhile, two other IGWS STATEMAP teams are shuffling their core boxes from trucks, to shelves, to the cutting table, to the describing table, and back to shelves again, all the while creating a trail of raw data that will need to be processed and archived for future geologists to consult generations from now.