At a 188-acre, mostly wooded site between Clinton and West Terre Haute, three IGWS geologists have been working for about a year to understand the glacial history of Atherton Island—land that is now a peninsula or upland, but used to be surrounded by glacial meltwater. It is currently bordered on the west by the Wabash River and on the north and east by an unusual north-flowing stream, Big Raccoon Creek. 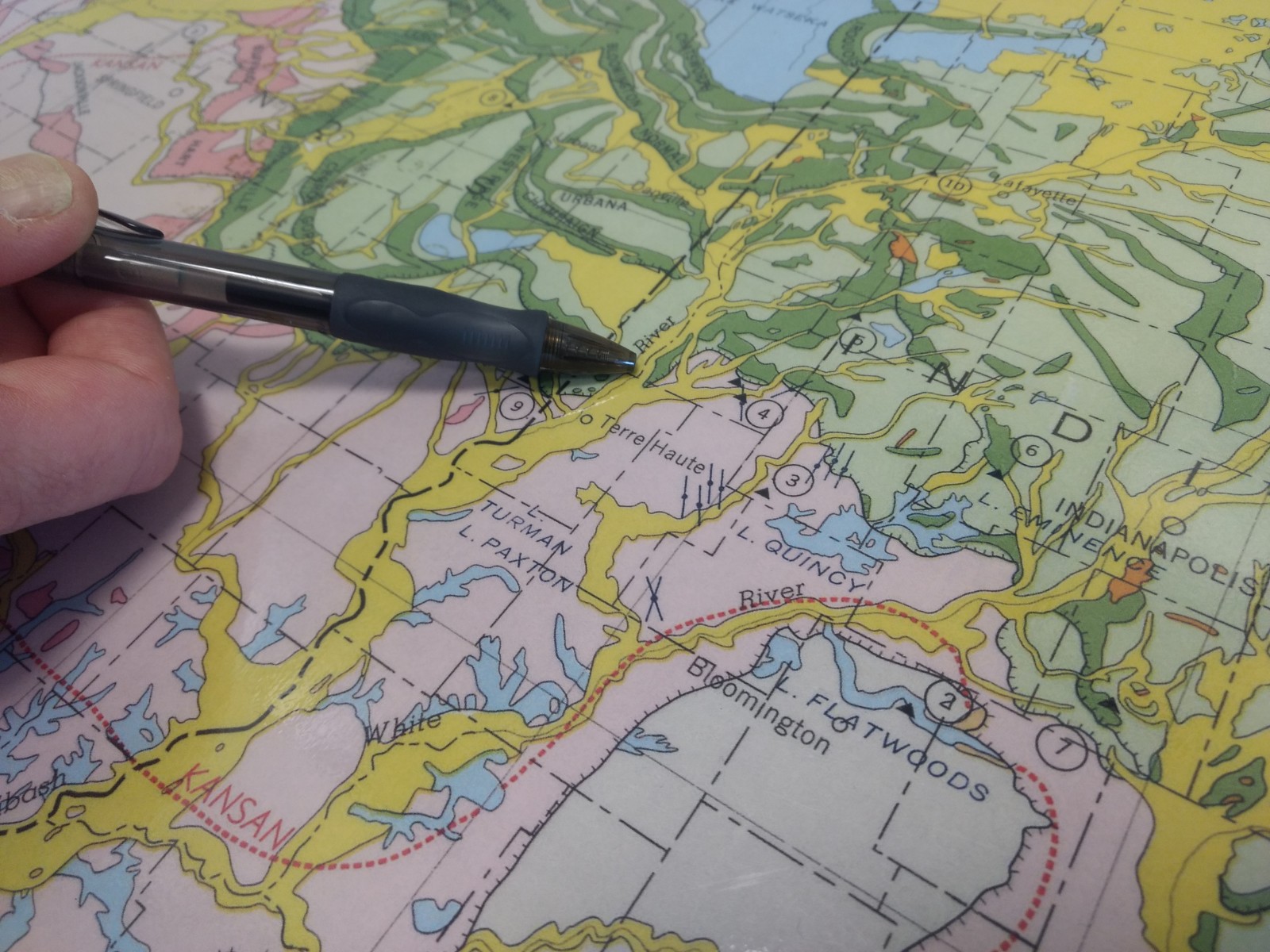 Why the creek reversed itself to flow north is an interesting question in itself, and several Indiana geologists have constructed theories to explain it—among them, IGWS alumnus William “Bill” Wayne in the 1960s.

But that’s not the question that IGWS geologists Henry Loope and Jose Luis Antinao and volunteer affiliate Peter Jacobs are currently studying. They’re investigating what the land and soils would have looked like around the time that the most recent glacier was pushing into and retreating from this area. The Lake Michigan Lobe of the Wisconsin glacier occupied the western edge of what is today Atherton Island about 24,000 years ago, which makes it all the more interesting of a place to study.

Clues normally lie underground, but, thanks to outcrops along the creek and in the adjacent gullies, several layers of silt, clay, and loess (windblown silt and clay), are naturally exposed here. “It’s a very unique place. You don’t find that many places where you have these types of sediments, that material was not eroded,” Loope said about the loess between the glacially deposited layers. 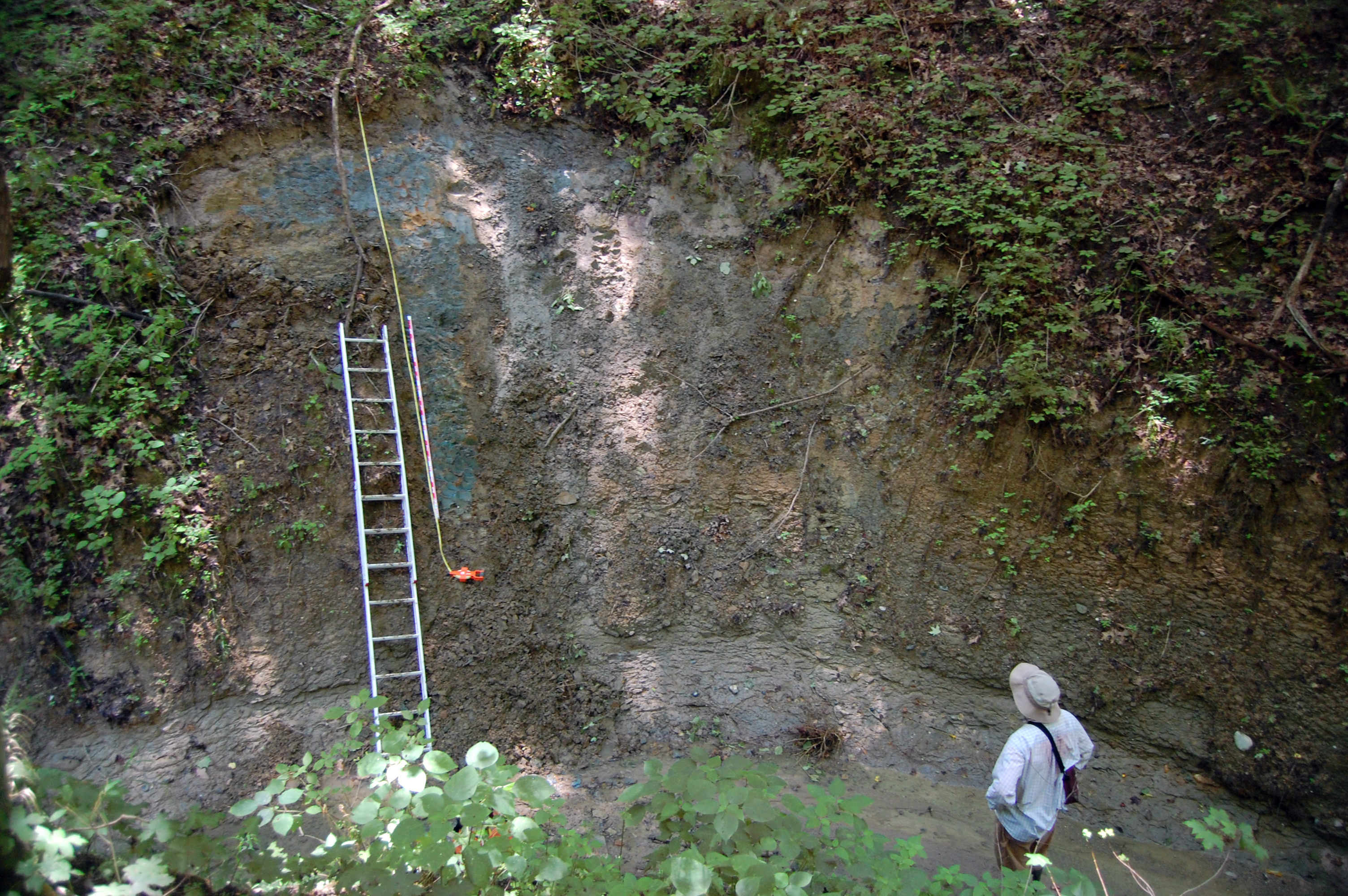 IGWS geologists have been collecting organic material for radiocarbon dating to try to determine how old the layers of sediment are. Wood fragments they’ve found “are very likely fragments of spruce trees that were overrun by the glacier,” Loope said.

“That’s one. The other thing is, there are gastropods (snails) that were living on the forest floor when it was a spruce forest. They’re also preserved, and so you can actually radiocarbon-date a gastropod shell.” Loope has worked with a colleague from Illinois who can identify gastropod species from their fossils, “and then you can understand that this was maybe a little more wet or a little more dry … but you can even go further by analyzing the isotopes in those shells and get a sense of, what was the temperature and precipitation like?

“… We know it’s going to be colder, because there’s a glacier sitting right there, but there are some species that are super unique that are really cold-tolerant … and when they find those, you know it was really cold,” Loope said. Today, those gastropod species live near Hudson Bay between Canada and Greenland.

Unlike some other projects the IGWS takes on, there isn’t a specific resource here to be mapped and studied, like water or energy. Atherton Island is under the protection of the Ouabache Land Conservancy, which plans to open the Atherton Island Natural Area to the public sometime this year. What this project is about is understanding the state’s physical history, which helps geologists refine their mapping.

It’s also just cool to imagine what you could have seen there during the last Ice Age. “It was right here, or just over this hill, and if you stopped here, you could have looked at the glacier,” Loope said.