If you’ve ever driven U.S. 41 between Rockville and Evansville, you’ve passed more than a dozen active or historic coal mine sites. Coal has been mined in 19 Indiana counties in the Illinois Basin since the early 1800s, and as of 2019, Indiana was still the eighth-largest producer of coal among all states.

Nearly 200 years of coal mining also has yielded waste and byproducts in the form of slurry ponds (fine refuse), gob piles (coarse refuse), ash piles, and acid mine drainage at abandoned mine sites which dot western Indiana. It is in that material, however, where researchers have been finding elevated concentrations of another important resource: rare earth elements (REEs).

REEs are metals necessary to make dozens of products we use every day, such as color TVs, headphones, computer hard drives, cellphones, GPS units, rechargeable batteries, CFL bulbs, satellites, and aircraft engines. They’re also essential to produce green technologies such as electric vehicles and wind power; and have applications in the medical field and in military technologies. 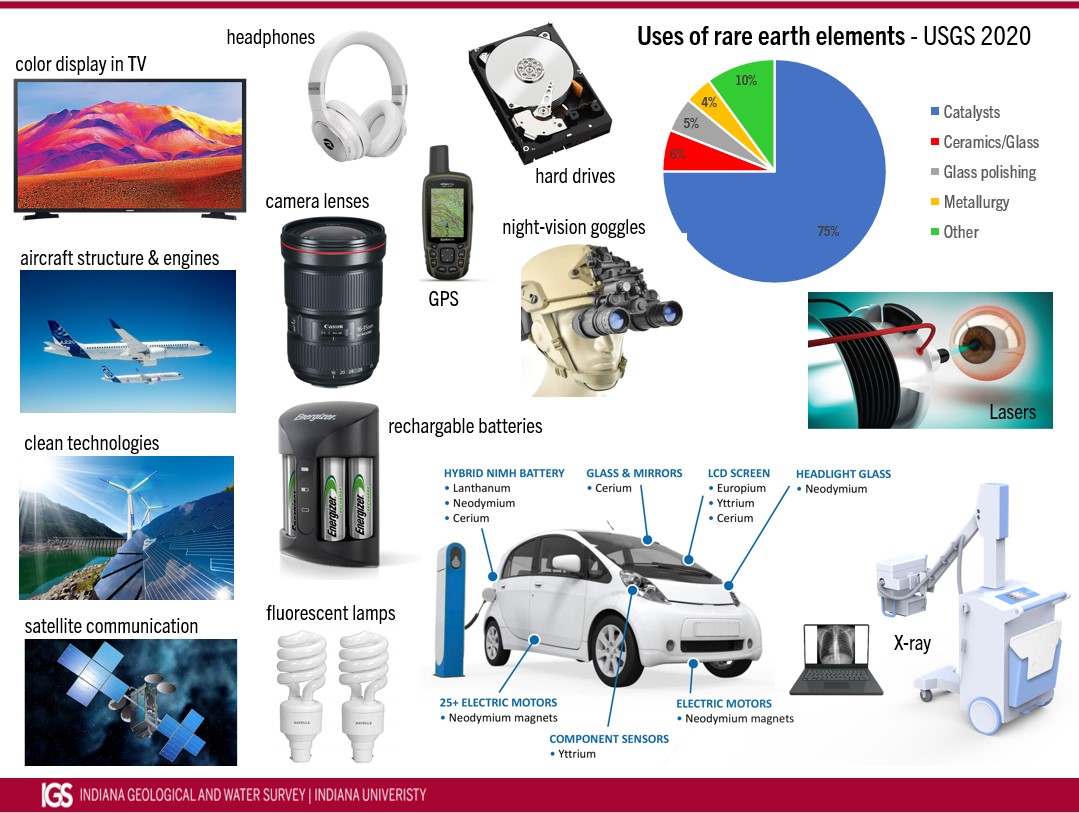 These elements aren’t actually rare—they occur in magmatic rocks as well as in clays and sedimentary rocks—but they are rarely found in large concentrations and are difficult to extract at an economically feasible scale. Historically, China has been the leading producer of REEs, controlling more than 92 percent of the market in 2010 and 58 percent in 2020. Several other countries, including the United States, have been stepping up their REE research and production in the past decade so as not to depend so heavily on imports.

The U.S. Geological Survey launched Earth MRI in 2019 to gather data about the potential for rare earth minerals nationwide. Since 2020, IGWS researcher Pat McLaughlin has been leading a geochemical survey of the Appalachian and Illinois basins focusing on REEs in Devonian black shales. The IGWS also has been working with geological surveys in Illinois, West Virginia, Maryland, Iowa, Pennsylvania, and Kentucky to collect and analyze samples from Pennsylvanian-age paleosols for REE content. In addition, the IGWS is collecting samples to study Ordovician-age phosphates for REE, collaborating with several other Midwestern states.

“Because Indiana geology is dominated by sedimentary rocks, our priorities are sedimentary rocks and the resources they host,” explained IGWS researcher Maria Mastalerz. “It could be rare earth elements; it could be uranium.” All the data collected from the multi-state consortiums will be combined into regional USGS reports to show what resources are available in each basin.

CORE-CM is funded by the U.S. Department of Energy. In April 2021, a research team from the Illinois Basin of Kentucky, Illinois, Indiana, and Tennessee was awarded nearly $1.5 million to study evidence and potential for coal and coal waste to contain REEs. At the IGWS, researchers Mastalerz, Phil Ames, Agnieszka Drobniak, LaBraun Hampton, and McLaughlin have been mapping the locations of mine waste sites in Indiana and collecting data on how much REEs are contained in them.

Prior to the CORE-CM project, Mastalerz, Drobniak, Ames, McLaughlin, and a colleague from Kentucky published a paper in 2020 evaluating concentrations of REEs and yttrium (together known as REY) in Pennsylvanian coals and shales in the Illinois Basin. They found the highest concentrations of REY in samples of Staunton and Brazil Formation coals from mines in Dubois and Daviess counties. More sampling, though, still needs to be done.

In addition, geochemical analysis showed that the coal waste from coal preparation plants and coal-fired power plants had higher levels of “enrichment” in REEs than raw, unprocessed coal. That means that gob piles at coal preparation plants (more than 70 of them in the state) and ash pits could be “huge resources” for REEs, Mastalerz said. But, again, more samples need to be collected and analysis done. The project team knows where all the coal prep plants are and is evaluating the probable volume of material that could be targeted as the source of REEs, Mastalerz said. 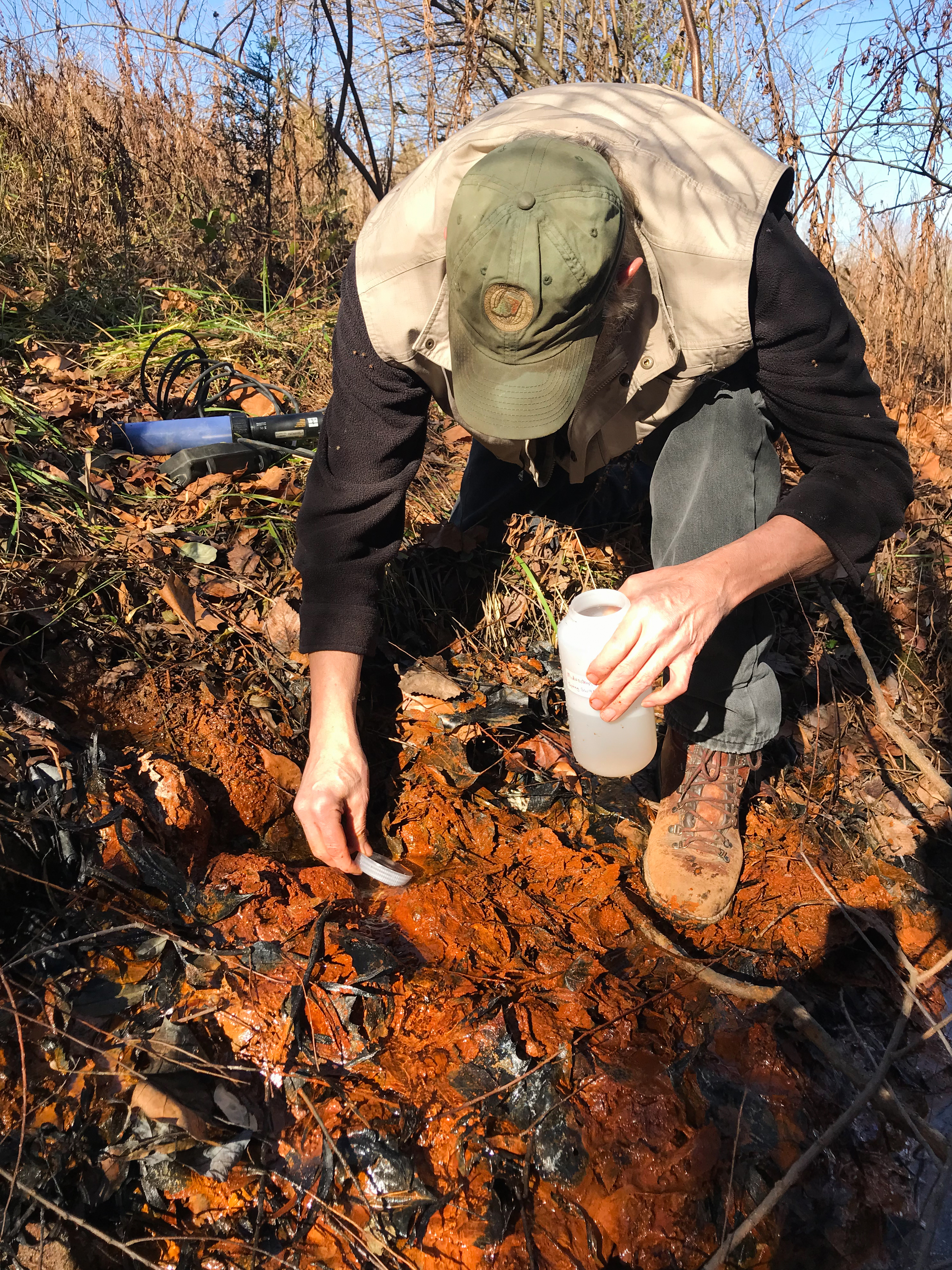 IGWS research scientist Tracy Branam, who’s studied acid mine drainage and abandoned mine sites for more than 30 years, has been working with Mastalerz and Drobniak to gather water and sediment samples near mined areas so that those can be analyzed for REE content as well. Branam documented REEs in acid mine drainage back in 2011 when he was collecting data for a different project, but no one seemed interested in REE data until now, he said.

One of the major hurdles right now is that technology does not exist to separate REY from coal waste and coal ash in an economically viable way, but that is a component of the DOE-backed CORE-CM project. Mastalerz is confident that major progress will come “within the next several years.”

“Coal, coal waste, coal ash—this is so important for Indiana, because we have so much of all of these materials that are such an unexplored REE resource, yet it could make a difference for our state,” she said. “So, I think the more people get involved in this subject, the better. This line of research definitely deserves more funding.”

To learn more about REEs, read this excellent primer on the subject in the Indiana Journal of Earth Sciences, Vol. 4.