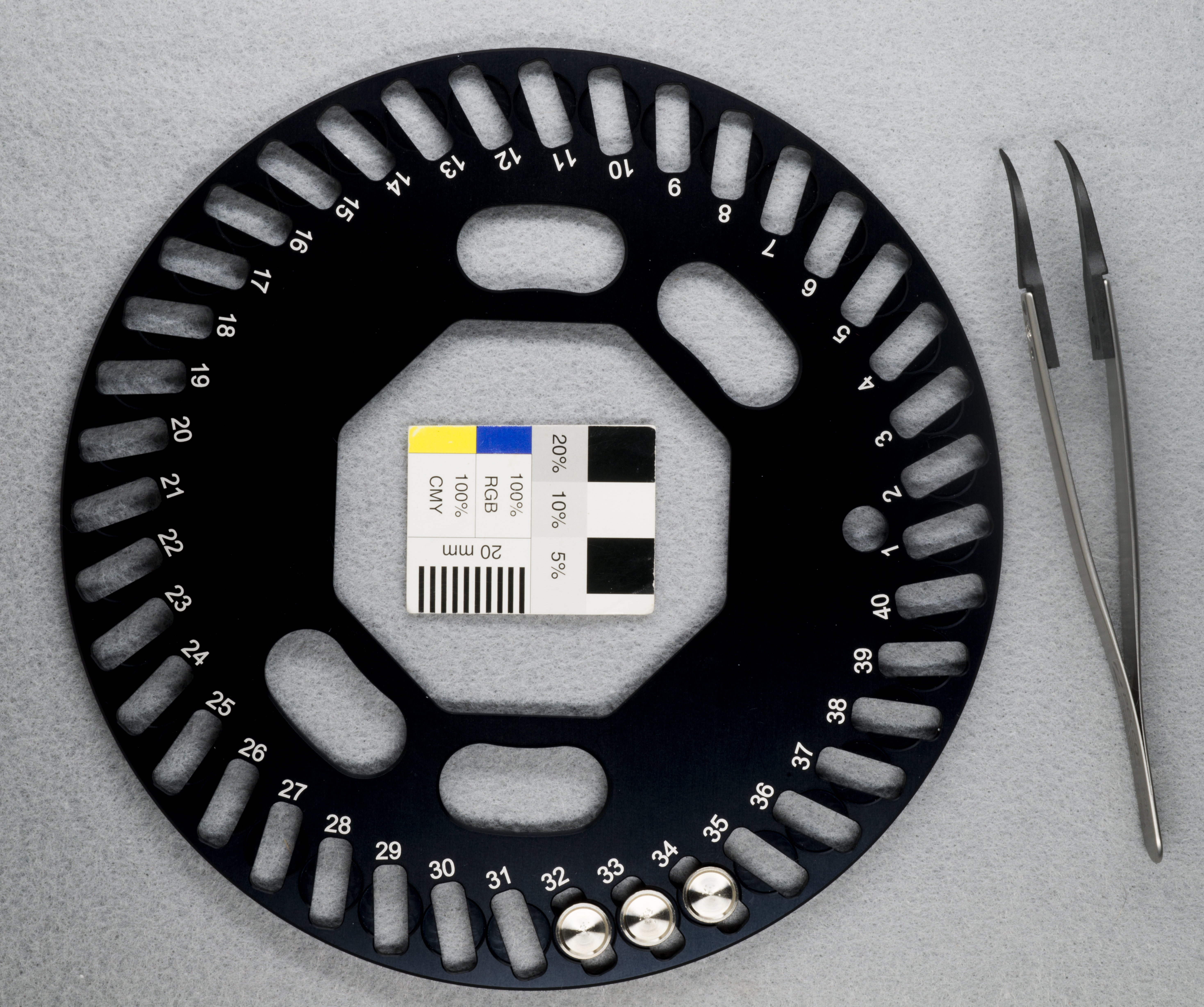 In a dark, quiet pod sealed off from the rest of the third-floor lab, IGWS research scientist Jose Luis Antinao grasps a steel disc, smaller than a dime, with tweezers. Suspended inside each disc—40 of them per tray—are a half-dozen grains of sand which may not have seen the light of day in thousands of years. After a few days’ time, the OSL reader working behind Antinao will tell him about how many years it’s been, helping to determine how and when those samples came to be deposited on the Earth, and helping to predict possible future patterns of landscape and climate change.

OSL stands for “optically stimulated luminescence.” Samples of sediment are collected in the field in lightproof containers and their natural radiation is measured; then, research assistant Valerie Beckham-Feller processes them in a darkroom lab before the samples are irradiated and measured in an OSL reader. The amount of natural and induced luminescence they produce points to the samples’ geologic age.

The Indiana Geological and Water Survey is one of 17 labs in the nation and the only lab in Indiana to have an automated luminescence reader, making it an important resource for students and scientists from several states. A trained technician oversees the entire analysis process, but many of the steps—like sifting, washing, and preparing samples for the reader—can be completed by graduate or undergraduate students, giving them valuable career experience, or stimulating an interest in the geosciences.

Luminescence geochronology can date events up to 200,000 years ago. Unlike radiocarbon dating, this method does not analyze an organic component; it looks at mineral grains like quartz and feldspar which absorb radiation underground. Some recent samples from central Indiana sediment have been dated to 160,000 years old. 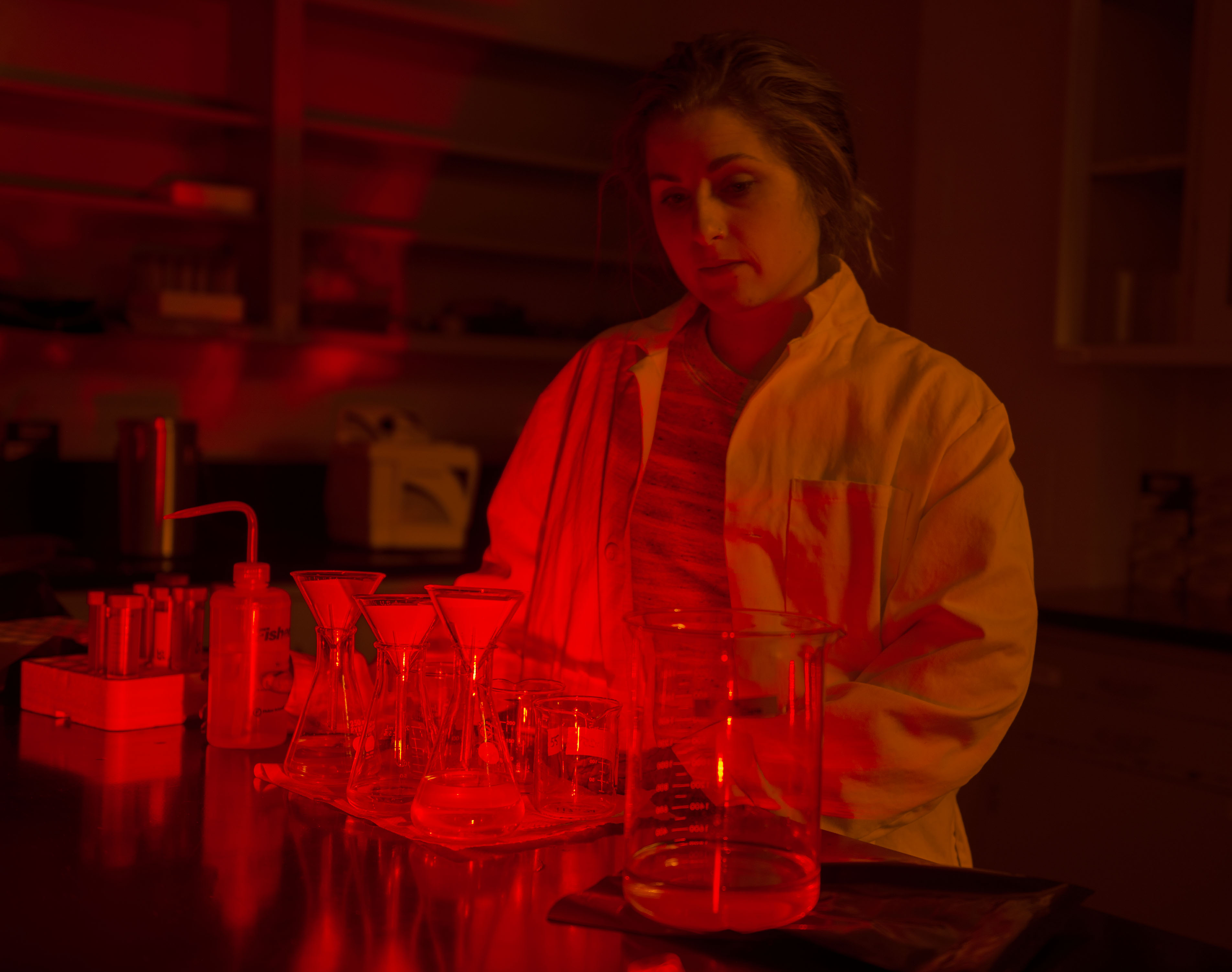 The IGWS started its OSL lab in the fall of 2017 with one reader (a Lexsyg Smart) in a 50-square-foot room, a lab in an adjacent room with sodium-vapor lamps that were assembled in-house, and a shared vent hood in another room. “In three years, this simple setup allowed the laboratory to grow such that it now routinely runs dozens of internal and external user samples per year, participating in projects funded by grants and contracts at the regional, national and international level,” explained Antinao, the lead researcher.

After recent IGWS building renovations, the OSL lab now has a dedicated fume hood, a dedicated controlled lighting room, and a locked interior darkroom which quadrupled the lab’s square footage.

The lab has the space to add a second OSL reader, but not the funding for it yet. The IGWS has been seeking a single-grain machine (a Risoe OSL DA20C/D), which would enable researchers to run more samples in a shorter amount of time and cut down on a backlog of work. So far, samples have come from Indiana, Illinois, Wisconsin, Ohio, Iowa, and California, as well as South America and Mexico. More are coming in from around Indiana as the IGWS continues its STATEMAP project to map bedrock and ice-marginal sediments in southern Indiana.

“Word has been getting out,” Antinao said—so much that the original machine is continually humming despite not being advertised. “It’s not a lot, but it’s enough.”

At the IGWS, in cooperation with researchers and students from IU Bloomington and IU Northwest, OSL technology has been used to:

• study the effects of intense precipitation on sediment along subtropical regions of North and South America in an effort to understand the effects of future global climate change;

• map and date the final retreat of the Laurentide Ice Sheet in northern and central Indiana, looking for sediments that could determine and protect aquifers; and