When staff at the Daviess County Highway Department or leaders at Cedar Crest Intermediate School want to know how weather is likely to affect their plans, they don’t have to rely on forecasts from counties-away weather predictors. They can check the data coming straight from their yards.

In early January 2022, the IGWS started receiving data from its newest weather monitoring station, Jasper South at Cedar Crest Intermediate near Huntingburg. The next-newest station, Washington East at the Daviess County Highway Department near Washington, went live in November 2021. The IGWS has installed and maintains 15 of these monitoring stations throughout the state, and hourly data from all of them can be viewed online at https://igws.indiana.edu/iwbn-dashboard.

The stations were installed as part of the Indiana Water Balance Network (IWBN), which the IGWS initiated in 2012. Each includes equipment to measure and keep track of air temperature, humidity, wind speed, solar radiation, soil temperature, precipitation, soil moisture, and groundwater level. In addition, the webpage for each station includes potential evapotranspiration (water leaving land by evaporation and plant transpiration) calculated using the climate data from various sensors. 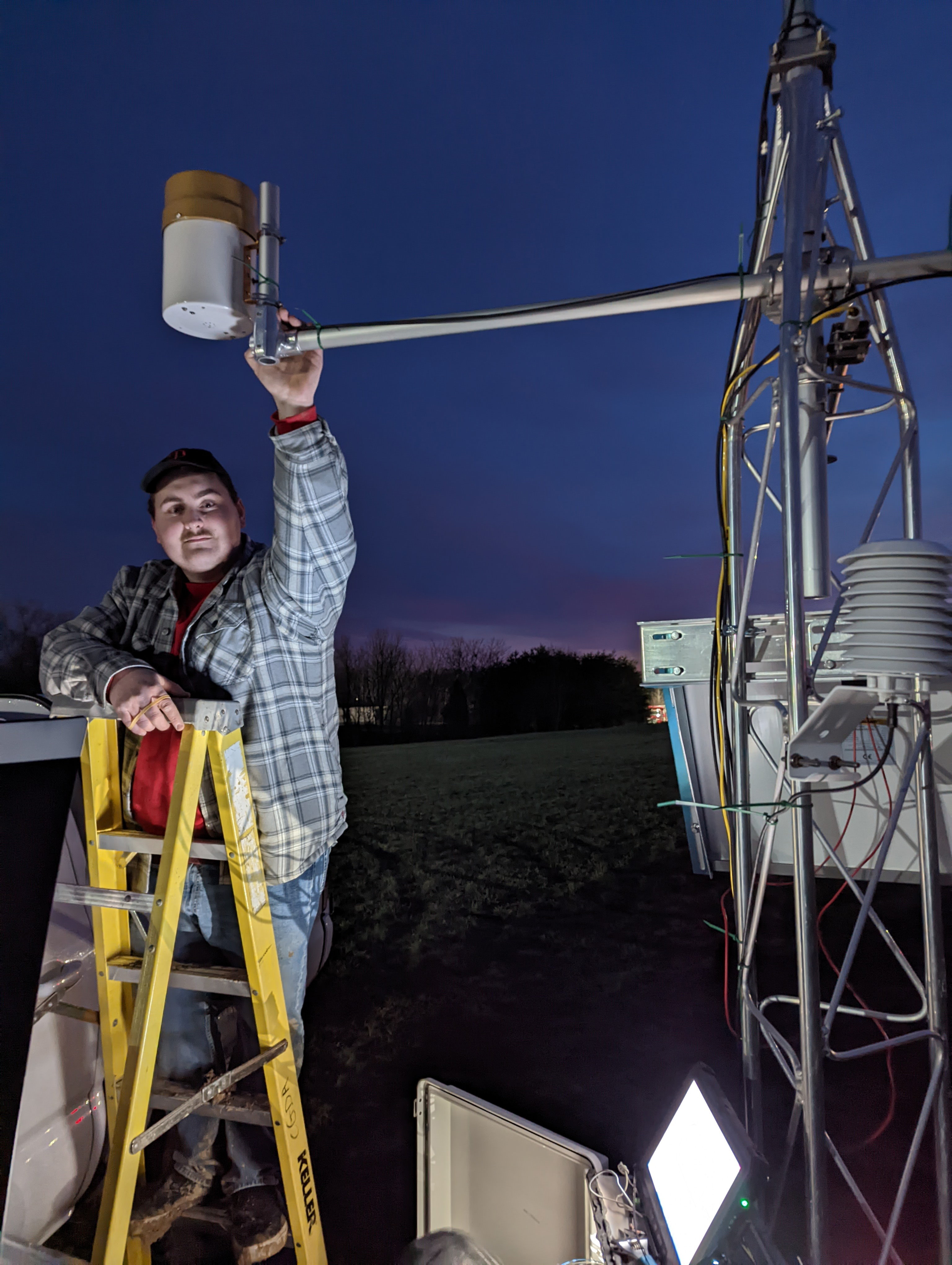 IGWS research scientists Babak Shabani and Ginger Davis see a lot of potential use for this data—from teaching students about mathematics and environmental data patterns, to predicting flash flooding in vulnerable areas, to alerting farmers about good weather windows for work in fields.

Highway staff can use soil temperature and soil moisture data to decide which pretreatment they should spread on roads and when they should put it down for it to be effective—potentially saving money on road treatment material and overtime. Localized weather data also can help predict if areas are going to get snow, ice, or just rain.

Utility companies have asked Shabani about soil sensors at multiple depths so they can assess risk to pipes that could be damaged by extreme cold.

Friends of Lake Monroe have been using Monroe County’s potential evapotranspiration data to help determine how accurate their estimates are of nutrients and sediment in the lake. They’re working to improve water quality for the more than 130,000 people who depend on the lake for drinking water.

Weather data also can inform policymakers about where to place renewable energy sources like wind turbines or solar farms. For some of the older stations, more than 10 years of data has been collected on wind patterns and solar radiation.

Public safety and emergency management agencies could benefit from checking this data as well. “Storm watchers all the time are looking for circular patterns in the wind, and we have wind sensors at the stations, so they can monitor that along with significant precipitation which could initiate floods,” Davis said.

One of the most valuable parts of this network is the diversity of sites where stations are collecting data, Davis said. They’ve been placed in all types of soil, in wetlands and in uplands, as far north as Gary and as far south as Jasper.

In addition, all weather monitoring stations are co-located or very close to wells that monitor groundwater so that IGWS personnel can collect data on patterns and the availability of that resource—from how much precipitation falls, to how much soaks into the soil and how much runs off, to how much migrates down to aquifers and how much evaporates, and how those figures vary according to topography, soil type, and other variables. That data also is fed to the National Ground-Water Monitoring Network.

As water access becomes an increasing concern across the nation and the world, keeping tabs on localized water cycles in cooperation with state and national monitoring agencies “makes good research, important research that can benefit all people,” Shabani said.