As a statewide research institution that’s existed for 185 years, the Indiana Geological and Water Survey has amassed literal tons of data.

Until the past few months, though, only a handful of people—mostly current or former IGWS employees and stone or oil/gas industry professionals—were able to easily access some types of data digitally or knew they existed.

A link to IGWS Digital Collections—also known as ResourceSpace—has now been added to the IGWS website. (The direct URL is https://data.igws.indiana.edu.) The extensive digital holdings include images, maps, documents, publications, and geoscience data relating to the geology of Indiana, as well as cultural heritage material connected to the state’s natural environment. The system currently contains 45,000 to 50,000 items—more than 4 terabytes of data—with the total growing daily. Items are sorted into “featured collections” to aid in navigation and browsing, and a variety of search options are available to help users find something specific.

Users can sign up for a free IGWS Digital Collections account if they want to gather and save their own collections of items for later use, but an account is not required to view and download. 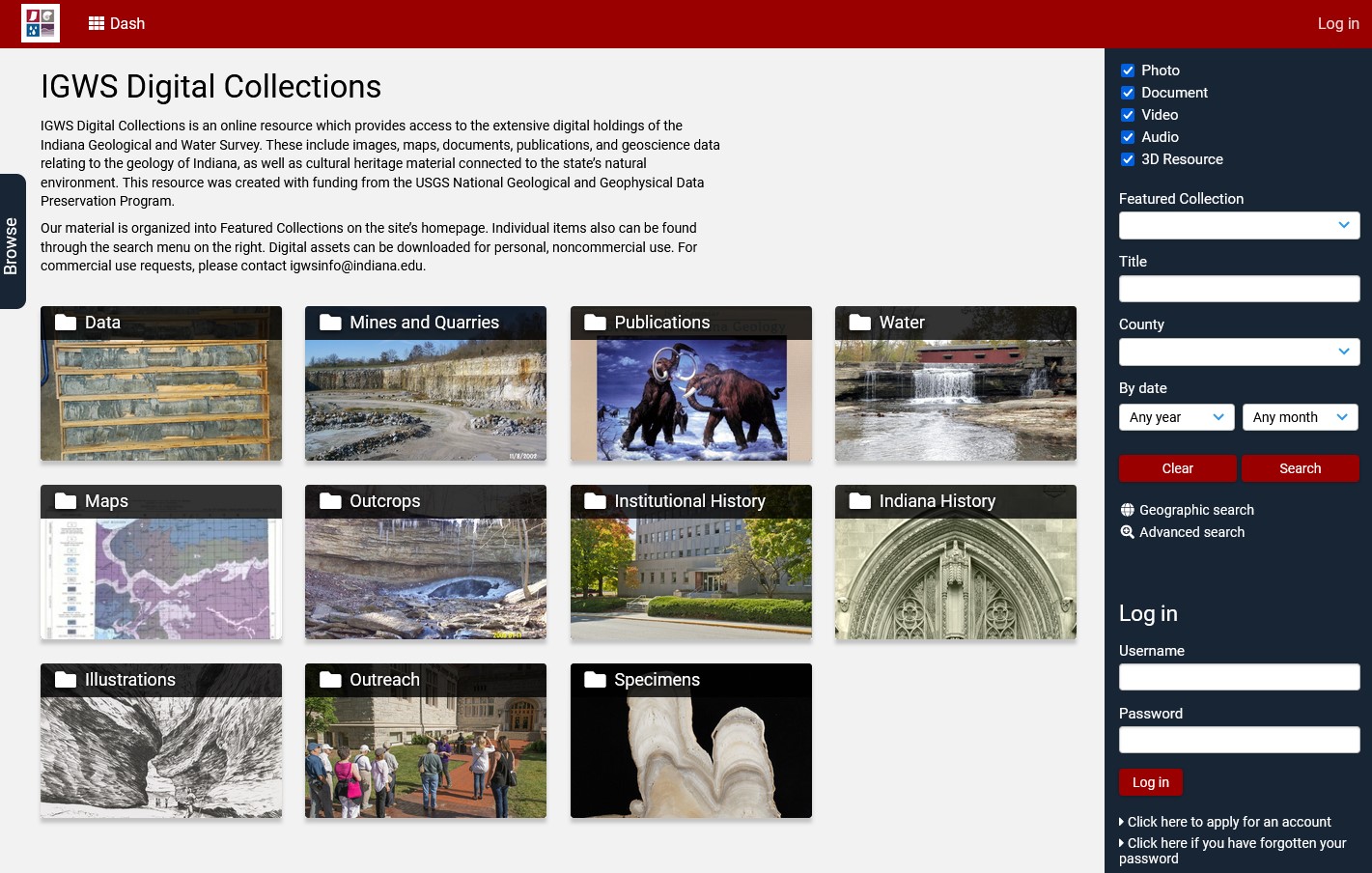 The building of the IGWS Digital Collections portal began in earnest in 2020 when the Survey received a data preservation grant from the United States Geological Survey. Will Knauth was hired as digital collections manager that November and began taking stock of all data housed on various servers and on paper. One server was beginning to fail around that time, and a longtime employee involved in scanning and archiving, Barbara Hill, was preparing to retire. Another early challenge was that Knauth’s background is in archives and cultural heritage technology, not geological sciences. “I was trying to get my head around how this system could be set up to be useful to the Survey. And there was also an element of, ‘What do geologists do?’” he remembered.

For decades, the Survey had been divided into research sections such as coal and industrial minerals, geochemistry, and glacial geology, and the prevailing system had been to silo data in filing cabinets or in digital folders with limited permissions for access. Without a more accessible and searchable system, IGWS researchers might not know that earlier data existed that could be valuable to a current project. “There was a lot of potential to duplicate work,” Knauth said.

Data accessibility also was extremely limited outside the Survey with many items being “basically invisible to the those in the taxpaying public and all the other current and potential audiences,” Knauth said. Various databases, map layers, and publications were searchable and some were downloadable on the IGWS website, but there was no central place where all available data types could be viewed and searched, including raw data that wasn’t published, like core photos, drillers’ logs, gamma logs, and geologists’ field notebooks.

Many other state surveys have been working through the same challenges, Knauth said, citing conversations at a recent data preservation conference. “I would say we’re ahead of the curve,” he said. “I think we probably have a lot more to do, but I actually feel really pleased with what we’ve done on it so far.”

Polly Sturgeon, education and outreach coordinator for the IGWS, is excited about what IGWS Digital Collections can do for school-age researchers. “We have so much content, so much material that would be useful for any school kid who ever does a report on Indiana geology. Finally, they have access to pictures and figures to put on their presentations. Every college student doing a thesis, there’s so much background information,” she said.

“I’ve wanted a place to house our digital collections for ages, and we’re so very excited; there’s just a lot of possibilities for the public to interact with our materials.”

Though not all 185 years of data has not been scanned and added to IGWS Digital Collections yet, the system is robust enough to release now with the expectation that it will grow and change over time.