The (nearly) forgotten fossils in our backyard by Sara Clifford

If you’ve ever walked past the back of the Geology Building, diagonal to Luddy Hall, you might have noticed a rock garden at the corner of Cottage Grove and Forrest Avenues. 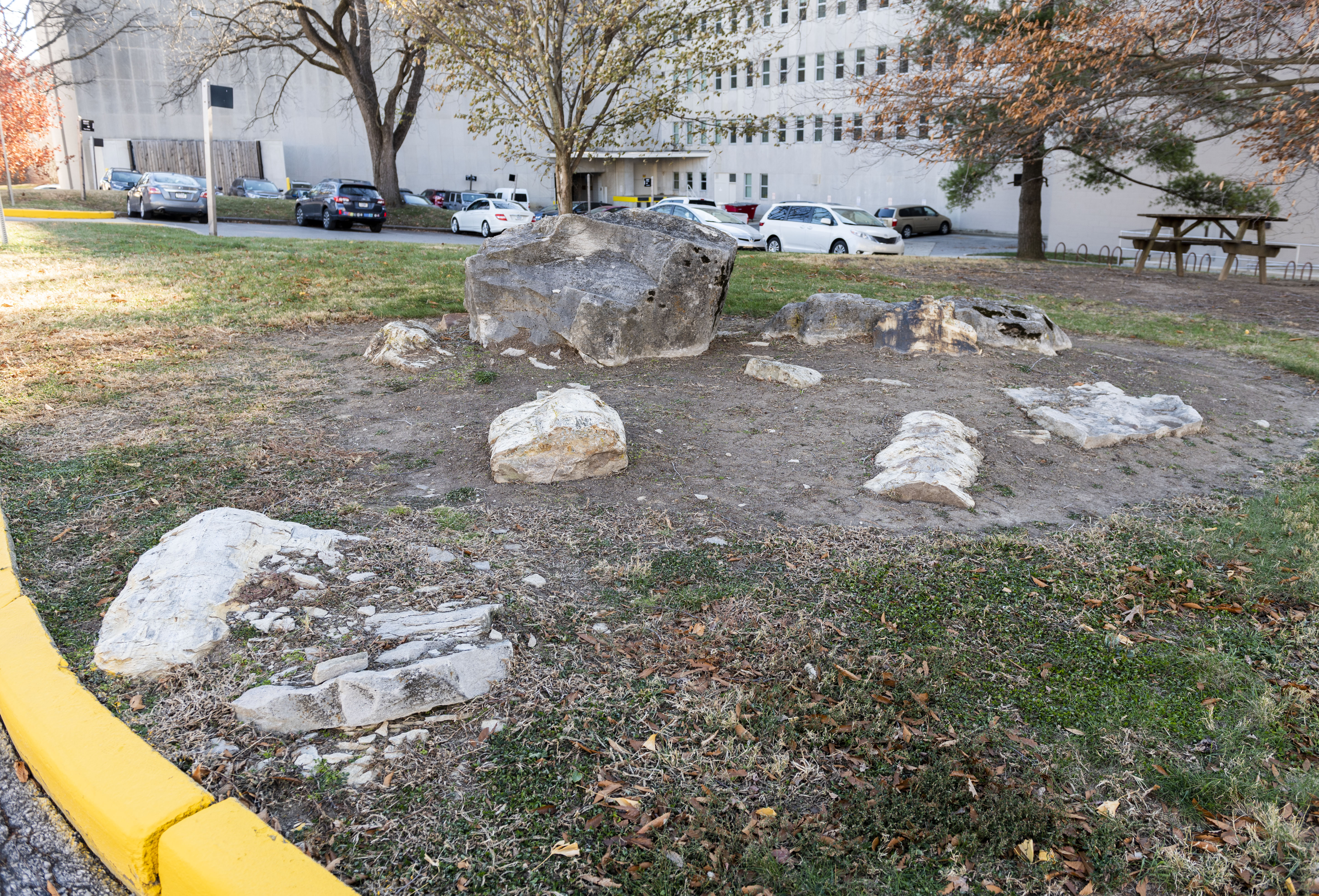 Perhaps “garden” is too generous a word. The spot is regularly mowed, but there’s no discernible design or purpose to the pile, and no marker explaining what the rocks are or why they’ve been deposited here.

Two IGWS employees believe they’ve dispelled some of the mystery of this place without really intending to.

At least three of the rocks on this corner are 300-million-year-old pieces of petrified wood. They used to sit outside Owen Hall, with a sign explaining what they were, back when the geology department and IGWS personnel were housed in that building. The current Geology/IGWS Building opened in 1964. It’s unknown how long the specimens sat against the foundation of Owen Hall or when they moved to the corner where they are now. 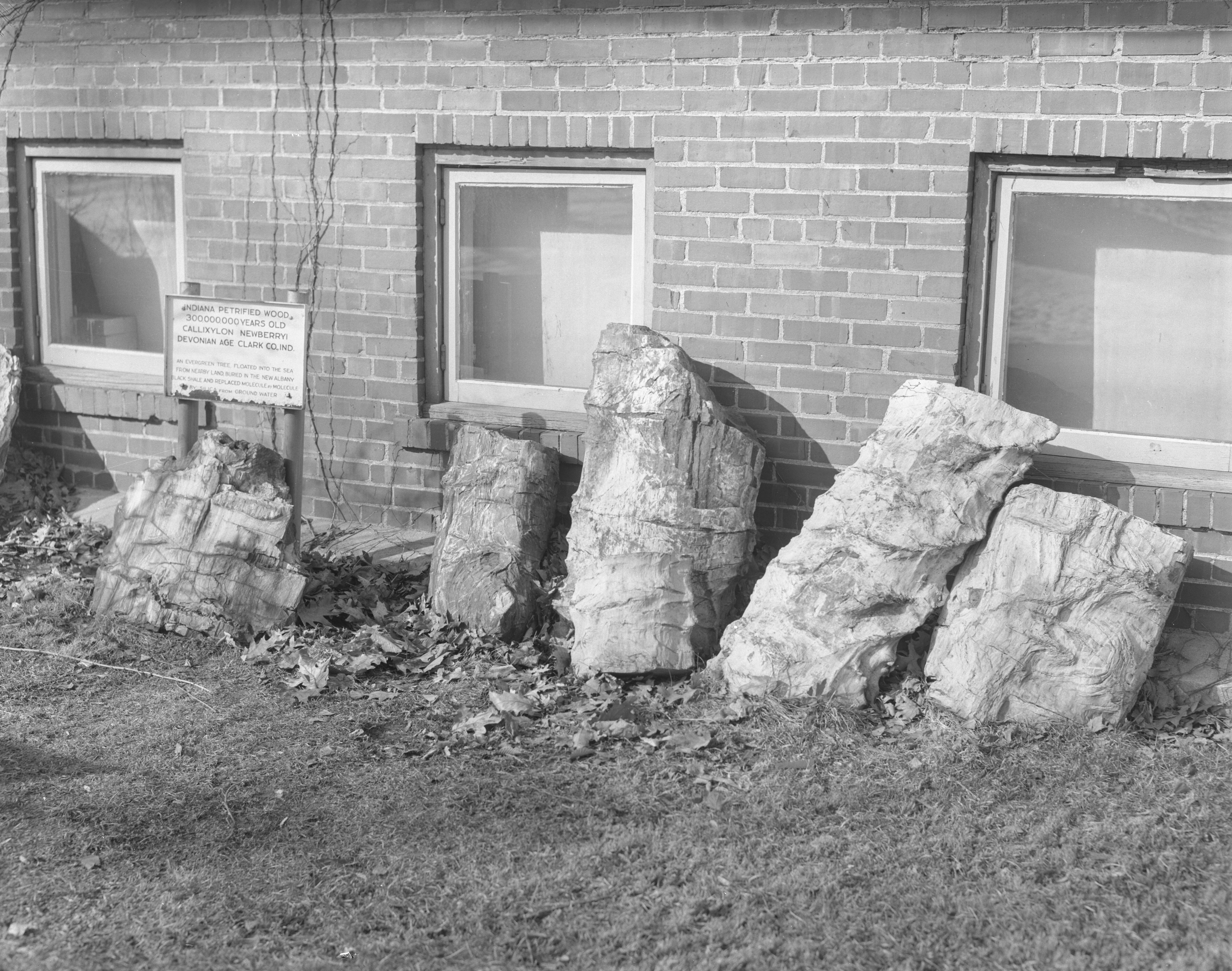 Digitization Imaging Specialist Kristen Wilkins has been going through photo negatives of IGWS history and adding new images to IGWS Digital Collections. She came across the Owen Hall images and got to wondering where those fossils ended up once the geologists moved out of that building. She asked IGWS Education and Outreach Coordinator Polly Sturgeon for help. “One of them looked weirdly familiar,” Sturgeon said. She used to walk past the pile behind the IGWS building as a grad student and wonder what it was.

Wilkins took her camera to the corner, snapped some new photos, compared them with the vintage photos, and marked notable striations. IGWS Director Todd Thompson said he’s confident that the current and historical photos are a match. See the photo collection at this link. 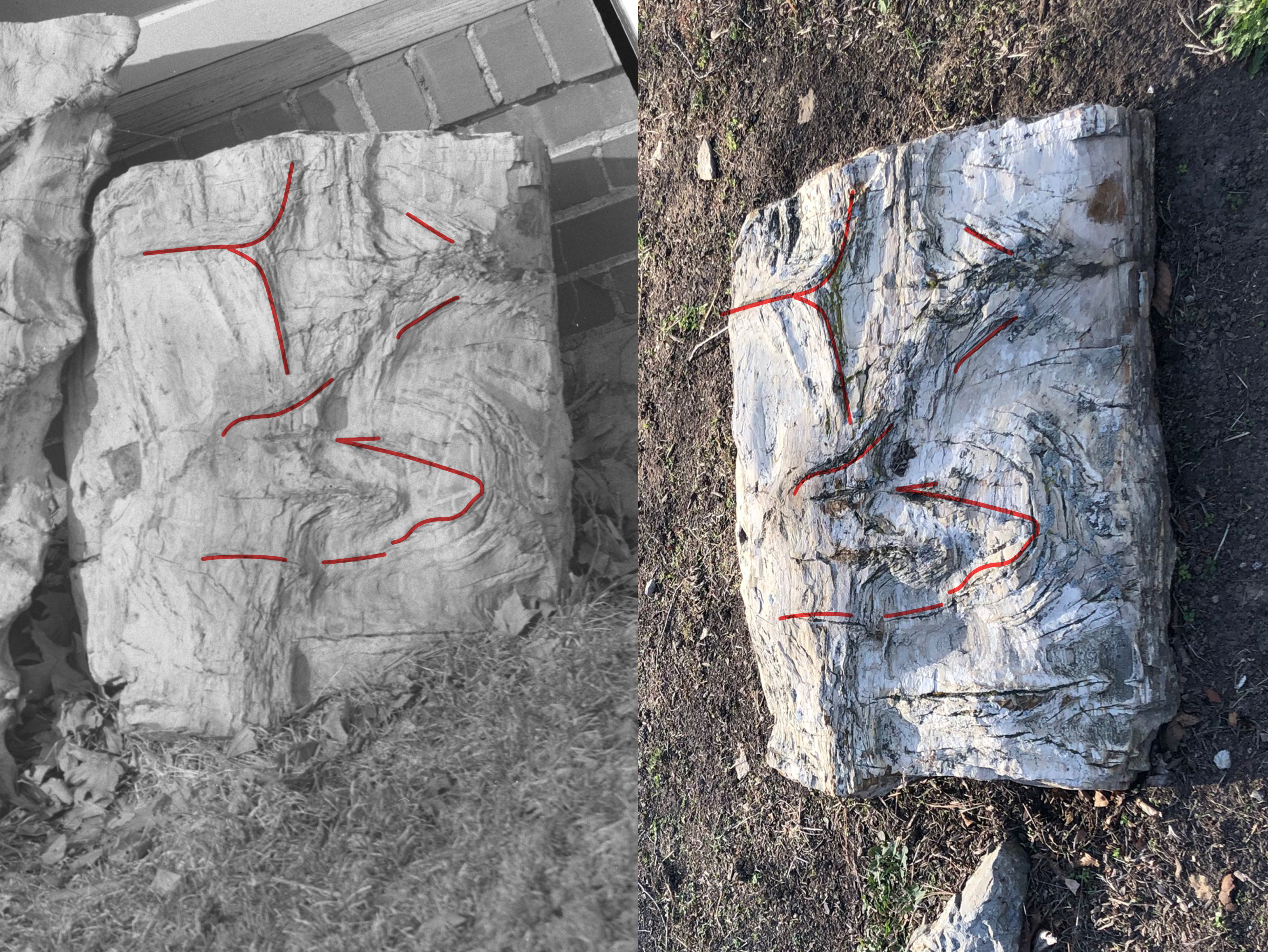 The sign that accompanied the collection outside Owen Hall read: “Indiana petrified wood, 300,000,000 years old, Callixyon newberryi, Devonian Age, Clark Co., Ind. An evergreen tree floated into the sea from nearby land buried in the New Albany Black Shale and replaced molecule by molecule by silica from ground water.”

Callixyon newberryi is the fossil name; Archaeopteris is the name of the “first modern tree” from which the fossils came. In a recent paper by researchers at Indiana University Purdue University Indianapolis (IUPUI), the evolution of Archaeopteris roots was suggested as a possible trigger for a series of mass extinctions. The fossil samples used in that study were from Europe, though, not the ones in the IGWS’s backyard.

“The next step would be to hopefully protect them so they could stop getting hit by cars and lawnmowers,” Sturgeon said. She has reached out to Dr. David Polly of the IU Department of Earth and Atmospheric Sciences to start a conversation about the specimens.

“They need to reevaluated by Dr. Polly and his paleontology curator (Jess Miller-Camp), and their disposition determined,” Thompson said. “Regardless, a new sign should be made.”

Do you have more information on this topic? Please share.