Public access to the IGWS core and chipset library closed Sept. 30 so that staff and contractors can prepare to move the collections to a temporary storage facility north of Bloomington. The extensive library—dating back to 1948 and including more than 50 miles of bedrock core samples alone—must be moved out of the Cardinal Metal Finishing warehouse (a.k.a. Otis) by the end of November because of an expiring lease.

While the move is happening and while the collections are in storage, physical core samples and chipsets will not be available for public inspection. However, some data from those cores are accessible through digital means; contact Archivist and Collections Manager Jenna Lanman for guidance and assistance. IGWS researchers have arranged for core samples they need for current projects such as STATEMAP and carbon sequestration to be stored in other areas where they can work with them.

When the core and chipset library will reopen to the public has yet to be determined. A location and funding to develop a long-term facility have not been finalized.

The core library fulfills an essential part of the IGWS’s mission to “collect and preserve geologic specimens and data.” “Everything we need to know about Indiana’s geology, from its mineral and energy wealth to available water, is below our feet,” said Todd Thompson, IGWS director and state geologist.

Before its move to Otis in 2018, the core library was housed in four buildings on campus, two of which the IGWS does not have access to anymore: 12th and Woodlawn (currently the Eskenazi School of Art, Architecture & Design Wood and Metal Shops), the Ideal Laundry building at 12th and Park (demolished for safety reasons in the summer of 2019), the IGWS Geologic Materials Testing facility (GMT) at 11th and Forrest, and the basement of the Geology Building at 10th and Cottage Grove. Part of GMT was demolished in the fall of 2019. Even after a major, two-and-a-half-year renovation to the Geology Building where the main IGWS offices and labs are, the IGWS has 19,847 fewer square feet for specimen storage than it did four years ago.

Meanwhile, the core library’s holdings have continued to grow as researchers collect new samples to complete work associated with USGS/AASG STATEMAP and other grant-funded projects. In 2021 alone, more than 5,000 linear feet of material was added to the library.

IGWS collections—which include the core and chipset libraries; the Education Collection of rocks, fossils, and minerals; and other special collections of specimens and records—contain an estimated 2 million objects, and, as a whole, they are among the highest-valued collections in the Indiana University system.

A study by the Conservation Assessment Program, conducted in the fall of 2018 on the Geology Building and IGWS outbuildings, recommended that “a single building to accommodate all the geologic collections would be ideal, but short of that, easily accessible, secure, environmentally-controlled space is necessary for all collections” as well as “room to grow,” “space for specimen processing (such as core splitting, sample washing and sieving, sample preparation for analysis, etc.)” and “space for specimen examination and education” so that the IGWS can “accommodate current collections and permit their growth for the next 50 years.”

In addition to the core library move, the IGWS is in the midst of another major collections project: to create a Records Center in Room 1005 and in the basement of the Geology Building. Most of those paper records of logs, tables, photographs, and maps, spanning at least 90 years of IGWS research, have been temporarily housed since January 2019 in the former Marching Hundred building at State Road 46 and Fee Lane. As such, the Geology Building basement will not be available for specimen storage. 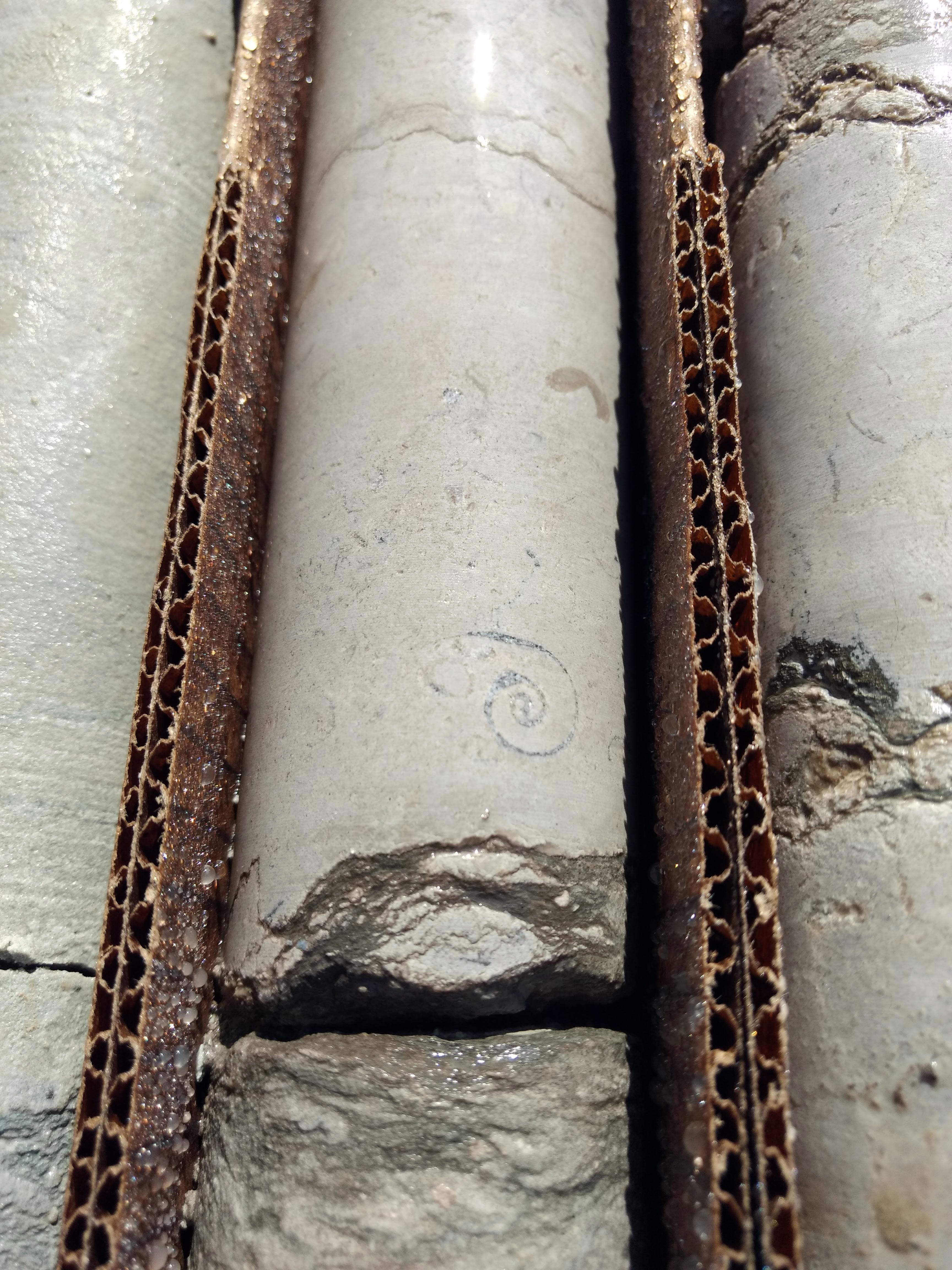 Lanman, Thompson, and other staff members have often answered the question of why the IGWS still needs physical samples of geologic material from 50-plus years ago when efforts are continually made to extract and preserve different types of data from them digitally: The cores are answers to questions that haven’t been asked yet. As newer and more precise techniques emerge, there is more to learn about the physical, chemical, and biological characteristics of those specimens. Also, retaining the original material is essential to verify conclusions.

“We have two recent examples (from carbon sequestration research) where external firms came in from multiple countries to look at a core that was collected and archived in the ‘60s,” Lanman said.

“Because that wasn’t even on their radar in the ‘60s,” added Polly Sturgeon, IGWS education and outreach coordinator. “And, for paper files, the object itself is also important to preserve because digital can fail.”

“We do not have a crystal ball on the future, so we cannot envision the questions that the Survey’s physical collections will address years from now. One thing we know is that earth materials storage is much cheaper than collecting them and many times cheaper than recollecting them, if that is even possible,” he added.

“In 1837, Indiana’s first state geologist, David Dale Owen, was charged with maintaining a ‘geological cabinet’ for the same reasons as today,” Thompson said. “I think he would be amazed and proud of our ‘cabinet’ of many millions of objects.”