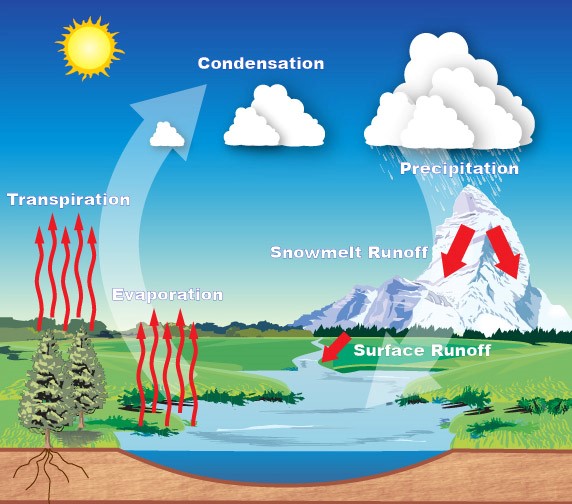 Climate change with its associated droughts and floods highlight the need to improve our understanding of water budgets in Indiana. During dry periods, precipitation is reduced and the hydrologic cycle shifts into a deficit phase (think of the state's water budget during droughts like the national debt). Water is lost from the landscape due to several processes such as transpiration and evaporation. Alternatively, during wet periods when rainfall is excessive, hydrologic components such as soil moisture become important because they directly influence the timing and duration of flooding. With these concerns in mind, personnel at the Center for Geospatial Data Analysis at the Indiana Geological and Water Survey (CGDA/IGWS) developed the Indiana Water Balance Network (IWBN) to monitor trends in water loss and gain for different components of the hydrologic cycle (fig. 1).

Hydrologic budget equation
For a particular watershed, water balance can generally be viewed in terms of inputs and outputs, with the primary input, precipitation (P), balanced by processes that “consume” water. The following general hydrologic budget equation is from Freeze and Cherry (1979), and the subsequent text describes each component:
P = Q + E + ΔSS + ΔSG 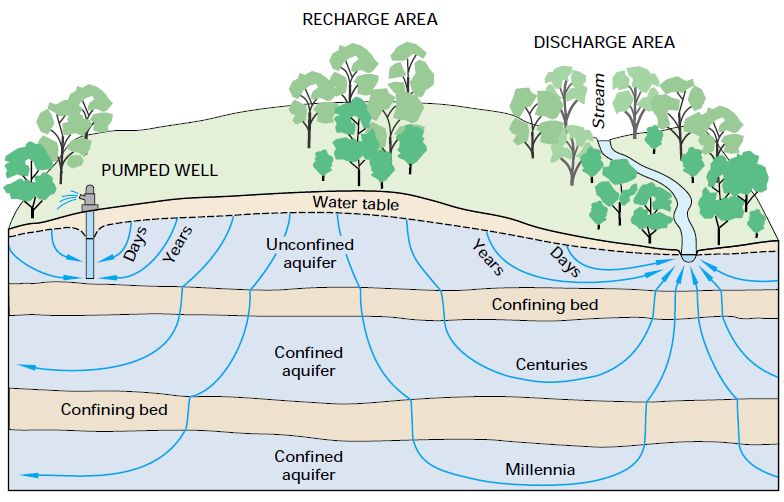 Runoff (Q)
Rainfall that is diverted toward streams and contributes to stream discharge is called “runoff.” This parameter is also difficult to measure, but it can be estimated based on stream flow measurements at a particular spot in the watershed. Stream gages (see USGS website for more information) are sites along streams and rivers where stream flow is measured, and these monitoring sites are vital for both flood forecasting and determining watershed runoff.

Evapotranspiration (E)
Moisture leaves the Earth's surface to the atmosphere via evaporation and transpiration (loss of water from plants). The combined processes are called “evapotranspiration” and this is one of the most difficult parameters of the hydrologic cycle (fig. 1) to measure. A number of weather-related variables (such as solar and atmospheric radiation, wind speed, and relative humidity) are measured and used to compute potential evapotranspiration (PET), the maximum amount possible given the existing conditions. The IWBN uses guidelines developed by the Food and Agriculture Organization of the United Nations (Allen and others, 1998) to calculate PET.

Soil Moisture (ΔSS )
Precipitation that infiltrates the ground surface and remains in pore spaces within the soil profile is called “soil moisture.” Upward water movement occurs when plant roots extract soil moisture and also when capillary forces bring moisture closer to the surface, making it susceptible to evaporation. Alternatively, downward movement of soil moisture toward the saturated zone (below the water table) results in groundwater recharge. Both these processes can result in movement of water out of the soil storage component. Soil-moisture sensors measure volumetric water content continuously at eight IWBN sites with two sites collecting shallow data (upper 2 ft) and six sites collecting data from 1 ft to 6 ft below the ground surface at 1-ft intervals.

Groundwater recharge/discharge (ΔSG )
Groundwater recharge and discharge are dependent upon the geology of an area, but groundwater recharge generally occurs near watershed boundaries, while discharge occurs in valleys near streams (fig. 2). It is important to identify areas of focused recharge, because these are settings where aquifers are particularly sensitive to contamination. Current research at the CGDA/IGWS is focused on using groundwater flow models to determine locations and rates of groundwater recharge. Furthermore, two IWBN monitoring sites are currently collecting matric potential (measure of how tightly water is held in pore spaces), soil moisture, and groundwater level data such that wetting/drying conditions, water fluxes, and water-table rise can be determined respectively.

Several projects undertaken at the CGDA/IGWS resulted in the collection of continuous data related to the water balance (Table 1). Seven sites have data that can be viewed online; you can contact Shawn Naylor (snaylor@indiana.edu) to obtain data for the remaining sites.