Potential Contaminants in Soils at a Confined Feeding Operation by Sally L. Letsinger 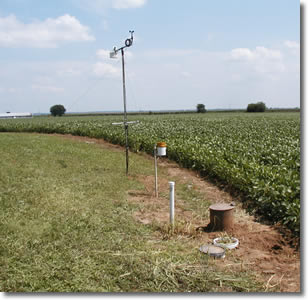 Hydrometeorological monitoring equipment near the CFO.

Several Confined Feeding Operations (CFOs) are being operated in the sandy soils of southwestern Indiana. Notwithstanding the efforts of the operations to comply with environmental directives and to ensure minimal impacts on ground and surface water in the area, there is no certainty that currently recommended best management practices (BMPs) are effective in every hydrogeologic setting. Ground water in this hydrogeologic setting (highly permeable soils and shallow water table) is presumably very sensitive to contamination. This potential sensitivity to ground- and surface-water contamination warrants a thorough investigation of the effective limits of current management practices.

Data from shallow monitoring wells in similar settings indicate that nitrate concentrations in water-table aquifers are often high; it is our hypothesis that this occurs because rainfall events early and late in the growing season are producing wetting fronts that flush nitrate from commercial fertilizers and animal waste through the soil zone before they can be used to promote plant growth. The study, which is supported by the U.S Environmental Protection Agency’s Clean Water Act Section 104(b)(3) program, is aimed at evaluating this hypothesis by using data collected from a working CFO. Through an intensive program of monitoring, we are attempting to track the effects that current manure-application practices have on ground-water quality in the area. The data and associated calculations generated in this study can be used by personnel of the Office of Land Quality of the Indiana Department of Environmental Management to modify their permitting criteria. Such changes may eventually include modification of current management practices, particularly with respect to the timing and rates of waste application. 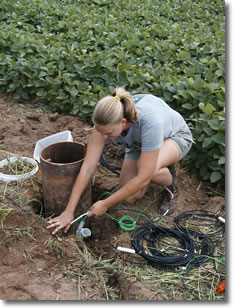 This study was conducted near the town of Washington, Daviess County, Indiana. Our study involved installation of hydrologic instrumentation and sampling devices that allowed a detailed hydrochemical budget to be developed for the waste application fields in the area of concern. Three sites were monitored: two on fields that received animal waste applications (in this case, turkey manure) and the other (a control site) on a field that received commercial fertilizer applications. Once the necessary data wascollected, we were able to accurately quantify storage and movement of ground water and solutes in the unsaturated zone, and rates of contaminant-loading of the shallow aquifer. Application rates of manure and commercial fertilizer supplied by the operators were compared along with weather conditions, antecedent soil moisture levels, and season, to changes in the nitrogen concentrations in the unsaturated and saturated zones.

Biweekly visits to the three study sites provided an opportunity to download electronically monitored data, measure soil moisture profiles, and collect water samples. Water samples were collected from the monitoring wells and from the pressure vacuum soil-water samplers. The samples were analyzed for dissolved oxygen, electrical conductivity, pH, oxidation-reduction potential, nitrate as nitrogen, ammonia as nitrogen, chlorine, phosphate, and potassium. By combining measurements of hydrological conditions with laboratory data on nutrients, we were able to develop a detailed hydrochemical budget with a focus on nitrogen. 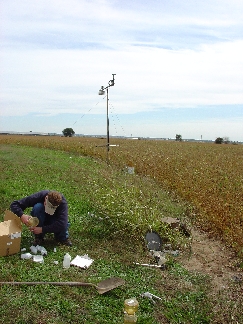 Ground-water and soil-water samples are collected and analyzed biweekly in addition to continuous measurements recorded by a datalogger.

The monitoring results demonstrate a relationship between recharge to the aquifer and nitrate loading of the shallow ground water. Gravity drainage occurs when soil tension is below field capacity. During these periods of recharge, nitrate is leached from the rooting zone and is flushed deeper into the subsurface. The data collected during out study indicate that pressure vacuum soil-water samplers respond to recharge with a lag increasing with the depth of the sampler (tracking migration of the wetting front). During short periods of gravity drainage, the effect is seen primarily in the shallow subsurface. Higher nitrate levels appear in the deep pressure vacuum soil-water sampler and monitoring well after longer periods of gravity drainage, which correspond to larger recharge events. Recharge events are visible in the graph below as increases in water-table elevation. The graph also shows that, in general, the highest nitrate levels in the saturated zone occur in the winter/early spring recharge period. Nitrate is transported in solution from surface application of fertilizer (organic or commerical) to the water table.

A significant outcome of the monitoring and modeling of nitrate fluxes was the observation that once the manure applications were suspended, the nitrate loading of the water table declined to values that were very comparable to those determined for the control site. The lower loading rates associated with the use of commercial fertilizer have to do with the time of application; a spring application corresponds to the growing season and the nitrogen is utilized by plants. 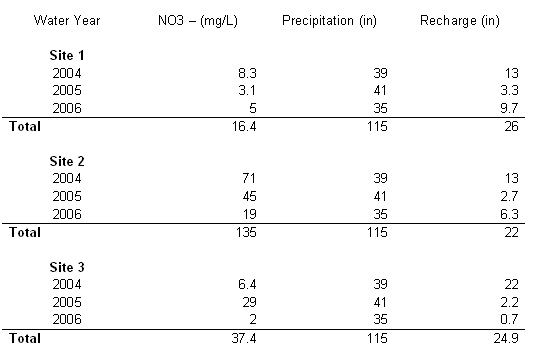 Graph showing results of water levels and nitrate concentrations from 2003-2006.

The IDEM CFO/CAFO program is based on the Confined Feeding Control Law administered through regulations adopted under the Water Pollution Control Board. The focus of the regulations is to protect water quality. The program provides oversight to CFO/CAFO operations in an effort to ensure that waste storage structures are designed, constructed and maintained in a structurally sound manner, and that manure is handled and land applied in an environmentally acceptable manner. Several pieces of legislation govern the way that CFO/CAFO operations are permitted, approved, and maintained. 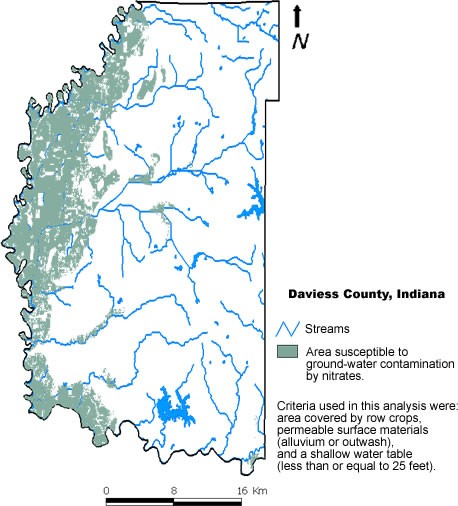 Map of Daviess County, Indiana, showing the area susceptible to ground-water contamination by nitrates (shaded area). Criteria used in this analysis were: area covered by row crops, permeable surface materials (alluvium or outwash), and a shallow water table (less than or equal to 25 feet).

The legislative code(s) that govern the oversight of Indiana’s CFO/CAFO operations require performance standards that are intended to protect the environment. A central theme in the rules that outline the requirements of such operations is the prevention of animal waste discharges into the “waters of the state.” 327 IAC 16-2-45 (via 327 IC 13-11-2-265) defines “waters” as “accumulations of water, surface and underground, natural and artificial, public and private.” Although “waters of the state” include groundwater by definition, the primary emphasis in the various rules and regulations appears to be on surface water, with secondary attention given to the protection of groundwater resources. In general, many of the recommended practices that we consider important to the protection of groundwater resources from contamination by poor manure-management practices are already covered in the Indiana legislative code. However, the operational use of these rules and regulations, as well as the oversight of these operations by IDEM, might not sufficiently prioritize groundwater resources in practice.  The explicit protection of groundwater is stated in the code by the regulation of land-application of manure and wastewater on saturated ground, in floodplains, and implicitly by the statements concerning the objective of the rules/regulations to minimize nutrient leaching beyond the root zone. Nutrient management plans are implemented to maximize the amount of nutrients used by crops, and minimize transport of the nutrients beyond the root zone and into the water table.  Proper rates, placement, and timing of animal waste and fertilizer applications can greatly reduce nitrogen migration into the unsaturated zone and water table. Nutrient management is a very effective practice for preventing groundwater contamination by nitrates (and phosphorus contamination in surface water).

Cumulative effects of land application of manure in a single watershed should be considered in the nutrient management plan, especially in areas with permeable surficial geologic materials.

Timing (season, storms)
Land application of manure, wastewater, and even commercial fertilizers should be emplaced only when crops are on the ground and provide an opportunity for maximum uptake by the crops. Pre-application during the fall or early spring before crop planting should be avoided. The existing guidance given for land-application – originally intended to prevent surface-water contamination – should be adhered to for the protection of groundwater quality. Appendix 4 contains selected sections of legislative code that applies to protection of water quality around CFOs. This guidance includes the following parameters: (1) Do not apply in floodplains; (2) Do not apply where less than 20 inches of soil lies over bedrock; (3) Do not apply to saturated ground; (4) Manure or wastewater should not be ponded on the ground.

Monitoring Monitoring of saturated zones only – through monitoring wells – is insufficient to characterize the amounts, if any, of groundwater loading by nitrate contamination. In addition, quarterly sampling is arbitrary with regard to characterizing the dynamic water chemistry of shallow groundwater, and post-storm sampling can also miss the peak concentrations that can occur from a recharge event. For example, the rains that caused the recharge event in the winter season of the 2004 water year occurred only about a week prior to the maximum nitrate concentrations in the unsaturated zone that resulted from that event.  Because of the long history of agriculture in Indiana, nitrate contamination is pervasive in the soil, unsaturated zone, and water table throughout the state. Even when new nitrogen sources are not being applied to farmland, the existing nitrogen in the subsurface continues to leach through the unsaturated zone into the water table. However, as documented in this study, the response of the unsaturated zone occurs quickly in comparison to that of the saturated zone when a management change is made. In contrast, the saturated zone changes slowly due to long-term buildup of nitrate and the horizontal movement of other contaminated waters toward local streams (the White River in this case).  Monitoring for the impact of management changes should be conducted over several seasons because loading of the saturated zone by vertical flow through the unsaturated zone depends on recharge (rate and timing) as well as solute concentration in the unsaturated zone. This study has shown that timing of precipitation and evapotranspiration combine to control the annual recharge rate which is not strictly a function of annual rainfall.

Nitrate levels at the control site (commercial fertilizer) were significantly lower than those at the sites fertilized with manure. Overall, nitrate levels from samples collected in the saturated zone were lower in the summer and higher in the late fall and early winter. This trend is probably linked to the increase in recharge associated with the annual hydrologic cycle.

The recommendations provided result from our current understanding of the IDEM CFO regulations, hydrochemical processes within the unsaturated zone and the relationships between surface topography, unconsolidated geology/soils, and depth to shallow potable water. The data from both our monitoring studies and GIS analysis indicate that many areas of Indiana are susceptible to shallow groundwater loading of nitrate. We therefore strongly recommend that fertilizer applications (organic or commercial) should be avoided or minimized in the early spring and late fall, when storms can push contaminants through the unsaturated zone without significant attenuation through uptake or filtration by plants.
The data collection for this project was conducted from July 2003 through December 2006. The results during the project duration support the hypothesis that nitrate levels in the unsaturated zone and shallow ground water are affected by land application of fertilizers. Nitrate migration coincides with periods of gravity drainage and ground-water recharge.

For more information on this project, contact Sally Letsinger at sletsing@indiana.edu.