Predictive Model for Beach Closings in Indiana by Greg Olyphant 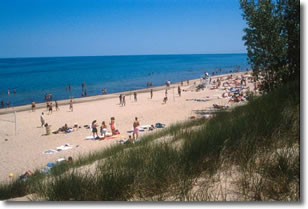 A summer day at a beach along the Indiana shoreline of Lake Michigan. But is it safe to go in the water? Using the current standard procedure for deciding on whether to keep a beach open, we don't really know.

Beaches along the Lake Michigan shoreline from Milwaukee, Wisconsin, to Michigan City, Indiana, have long been plagued by occurrences of high Escherichia coli (E. coli) concentrations in the water. Most health officials and beach managers have a policy of closing the beaches to swimming whenever E. coli concentrations are above the United States Environmental Protection Agency (USEPA) recommended limit of 235 colony forming units (cfu) per 100 milliliters (mL). A major problem facing decision makers is that E. coli analyses generally take 24 hours to complete, so swimming bans are based on day-old information. Retrospective inspections have shown that there have been numerous instances when beaches were closed when they could have remained open or left open when they should have been closed. Any relationship that might exist between beach water quality on the day of sampling and on the day of decision is rarely known. 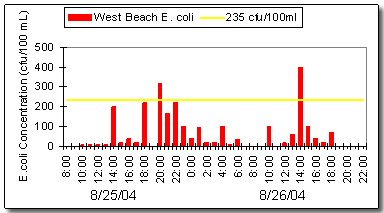 The graph to the left shows the E. coli concentrations for two days in August 2004. When the E. coli concentration (red bars) was greater than 235 cfu/100mL (yellow line), the swimming beach should have been closed for public safety. Because no rapid and accurate method for measuring E. coli concentrations has yet been developed, indirect methods may show the most promise for improving the accuracy of beach-closure decisions. We are developing a methodology for making forecasts of beach-water quality on the basis of hydrometeorological conditions.

Developing “SwimCasts”
Understanding and predicting short-term variability of bacteria concentrations in stream water and lake water is crucial to the development of an early warning system for beach closures along the Indiana shoreline of Lake Michigan. This study was designed to evaluate the variability of E. coli concentrations in water discharging from Dunes Creek onto the main swimming beach at Indiana Dunes State Park and to develop a predictive model that relates the outfalls of creek water, as well as other hydrometeorological factors, to concentrations of E. coli bacteria in the beach's swimming zone.

The goal of this project was to develop prototypical statistical models for predicting the need for beach closures and openings. The approach used, called “swimcast” by Mark Pfister of the Lake County Illinois Health Department, involves (1) installing electronic sensors for continuous monitoring of hydrometeorological conditions (rainfall, sunshine, winds, waves, and so on) at the beach of concern; (2) developing statistical (regression) equations that correlate measured E. coli concentrations to the hydrometeorological variables; and (3) posting warnings and closures based on the results of the statistical regression (predictive) equation output. Such an approach allows decisions to be made hourly in real time so that beaches can be closed when the probability of high E. coli concentrations is great, and then re-opened when the risk to health has abated.

The approach described above was originally developed for the City of Chicago during the summer of 2000. The results of that effort were very promising (Olyphant and Whitman, 2004). However, the methodology must be tested at other beaches around Lake Michigan (and elsewhere) before it is adopted by beach managers and other decision makers responsible for protecting the health of the millions of people who visit public beaches each summer.

Study Site
We conducted the project in northwestern Indiana (Porter County) at the main beach of the Indiana Dunes State Park—Indiana Dunes State Park Beach, West End and East End. Dunes Creek enters Lake Michigan between two swimming sections of this beach. This beach was chosen because it is a very popular tourist beach and because it has a long history of water-quality problems. Dunes Creek, which is commonly laden with high concentrations of bacteria, discharges water from a 30 km2 (11.58 mi2) drainage area directly into the lake at the beach. Monitoring stations were installed to monitor lake water, meteorological conditions, and stream-flow conditions. See the map below for locations of monitoring points. 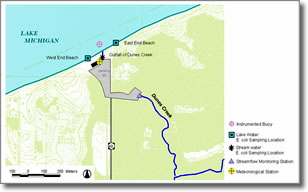 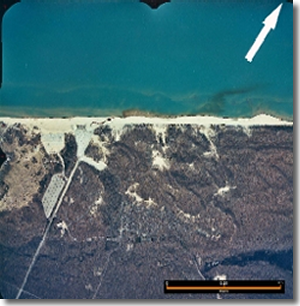 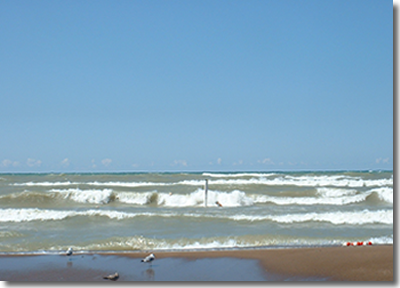 Waves in Lake Michigan, which have been found to be related to bacteria levels in the water.

For many years, scientists and beach managers have recognized that high concentrations of E. coli in water adjacent to swimming beaches along the Lake Michigan shoreline occur after storms. There are at least two reasons for this. In some instances, large rainstorms in developed areas near the coast produce excess runoff that can overwhelm sewage treatment plants and cause failure of on-site septic systems. The resulting outflows of sewage enter the local drainage systems and eventually discharge into the lake and load it with bacteria for several hours at rates exceeding 106 cfu/100mL per second (Olyphant and others, 2003). Once the bacteria have entered the lake, currents may push the contaminated water toward a beach and make it unhealthy for swimming. Secondly, studies at beaches along the southern shore of Lake Michigan have also shown that E. coli concentrations in the sands of the swash zone are high, or higher, than those of the water (Whitman and others, 1999). When storm winds initiate waves and direct them onto the beaches, the foreshore sand is eroded and “stored” bacteria are released into the water, raising the E. coli concentrations to levels that are above the allowable threshold for full body contact (Whitman and others, 1999; Haack and others, 2002). Of course, there are other factors that can strongly influence the bacterial concentration of beach water. For example, E. coli are very sensitive to sunlight (especially ultraviolet light), which causes them to deactivate (Fujioka and others, 1981; Davis-Colley and others, 1994).

With these facts in mind, a multivariate model was developed for predicting E. coli-concentrations in the swimming zone of Lake Michigan beaches. The model used local (site-specific) data on wind speed and direction, rainfall, temperature, and incoming solar radiation, as well as data on water temperature, waves, turbidity and other selected water-quality variables, to predict the concentration of E. coli bacteria in the swimming zone of a particular beach. Although the ultimate aim is to develop site-specific models for all Lake Michigan beaches, the initial effort focused on the beaches at Indiana Dunes State Park.

The table below lists all of the hydrometeorological variables that were used in the statistical regression analyses at West End Beach.

The predictive models developed in this study are based on time-series regression analysis. Models were developed for two swimming beaches as well as Dunes Creek; however, only the model developed for Indiana Dunes State Park Beach,West End (West End Beach) is presented here as an example. All of the variables listed in the previous table, as well as their products (representing statistical interactions), were considered as potentially predictive variables. However, only those variables and interactions that contributed significantly to the regression, as represented by a statistical test of their associated regression coefficients, are discussed below. 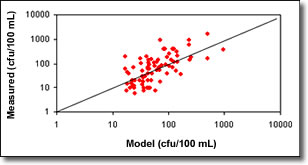 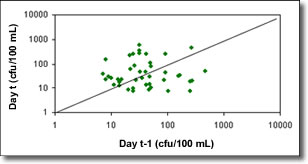 Traditional method of closing beaches based on day-old information

In the case of West End Beach, the performance of the predictive equation was evaluated by comparing model predictions of when the E. coli concentration would be above or below 235 cfu/100 mL with measured concentrations in samples of beach water. Realizing that there are errors associated with both the model and the actual sampling method, a 99-percent confidence interval was placed on each model prediction (namely, there is a 99 percent probability that the real value lies between the upper and lower bounds of the predicted value range). The model-based predictions can also be compared with the traditional method of assessing the need for beach closure, which is to evaluate the bacterial contamination level of the previous day's field samples.

The regression model predicted measured E. coli concentration (EC) (R = 0.63; left graph above) much more accurately than samples collected the previous day (R = 0.02; right graph above). The regression-model predictions of whether the E. coli concentration was above or below the 235 cfu/100mL threshold matched those of the field sampling on 69 out of 81 cases, indicating 85 percent accuracy. However, given the uncertainty associated with both the model and the field sampling, it is useful to put a 99-percent confidence interval on the predictions. When this was done, only four cases remained unaccounted for (all of which yielded underpredictions); this implies that the model will provide a degree of accuracy about 95 percent of the time.

Discussion of Model Results
The model results (statistical regression equations) indicate that water-quality conditions (E. coli outfalls and concentrations) can be successfully predicted using output from electronic sensors that have been programmed to collect data on a continuous basis (namely, in real time). The best-fit regression model developed for the West End Beach is complex. Primary controls on the E. coli concentration are wind, waves, rain, sun, and the contribution of E. coli from Dunes Creek. The bacterial outflow from Dunes Creek is statistically significant, but not a dominant factor. There is a significant effect of the parallel wind vector, indicating that winds from the east blow the discharge plume towards the West End Beach and increase its E. coli concentration. Waves have a very significant effect on E. coli concentrations at the West End Beach, and they also seem to interact with onshore winds (normal component wind vector) and rainfall to affect the water quality. The West End Beach also exhibits interactions of time of day (morning or afternoon), sunshine, and temperature, but the effect is one of increasing the E. coli concentration. Taken together, this increase in bacterial levels may simply be an artifact of more swimmers in the water (stirring up sediment and directly adding to the lake water pollution), or it may be indicating that some kind of bacterial population growth is occurring at the beach under the warm sunny conditions.