The 2018 CalendAR is an augmented reality experience for discovering the fossil record of Indiana. Users can explore 3-D models of fossils from the Indiana University Paleontology Collection using the Fossil CalendAR app and 2018 CalendAR poster.

Augmented reality (AR) is a technology that superimposes digital content onto real-world imagery using a smartphone or tablet. When the camera of the device running the Fossil CalendAR app is pointed at images of common Indiana fossils on the CalendAR poster, the app recognizes those images and projects interactive 3-D models. The fossils used in the 2018 CalendAR were 3-D scanned from real fossils found in Indiana, converted into digital models, and brought to life, digitally, using AR technology. 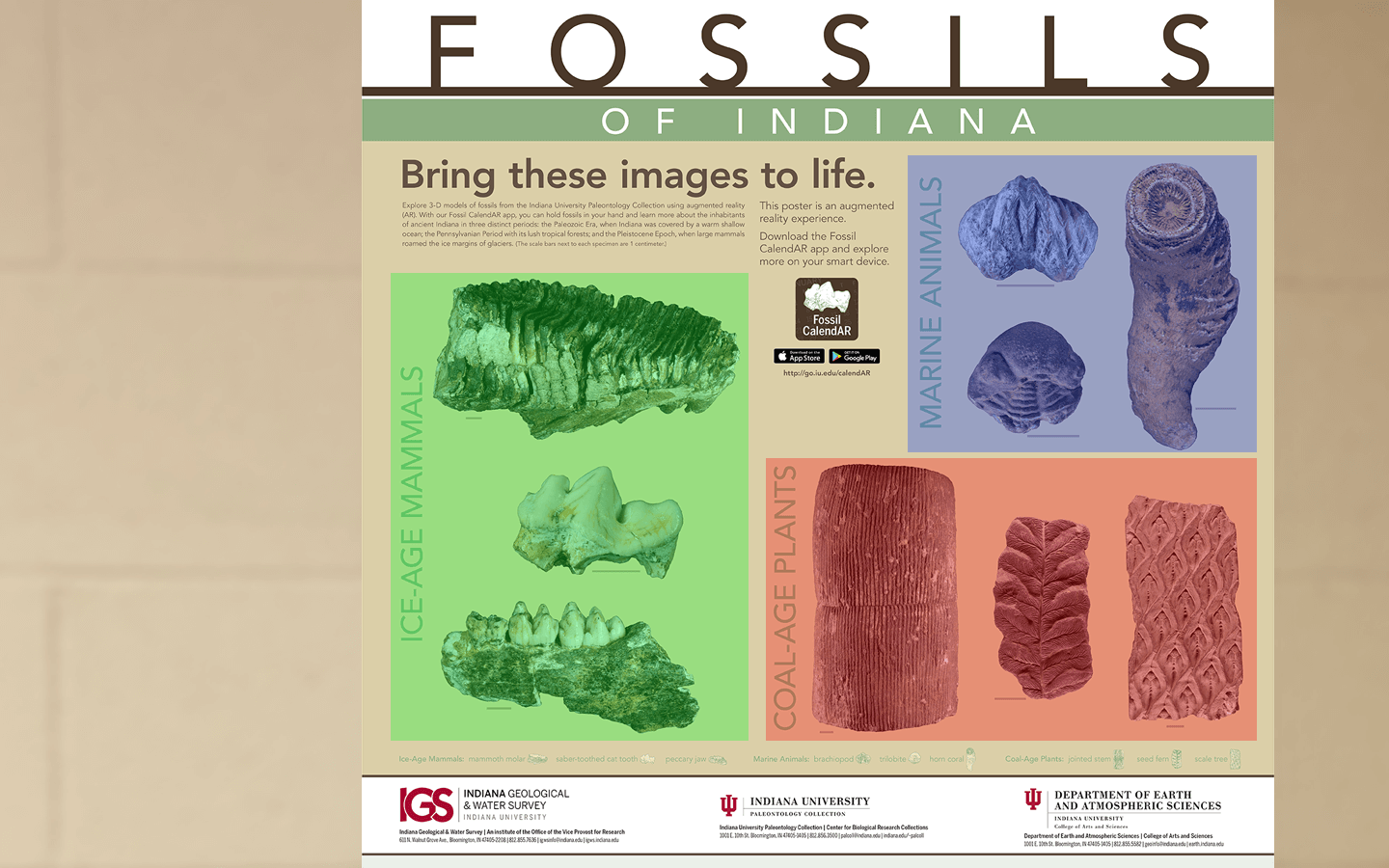 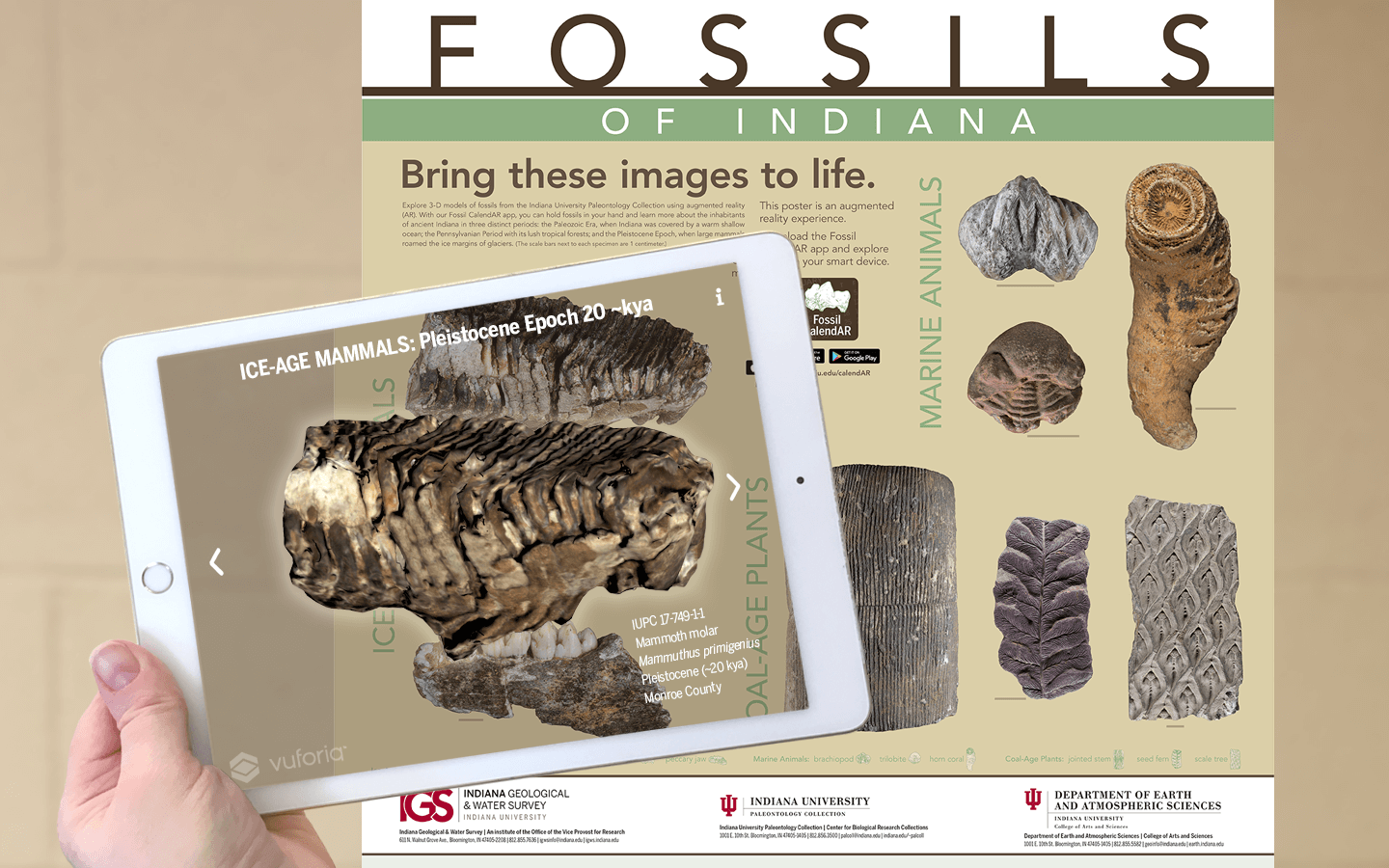 Each set of three images, as viewed with the Fossil CalendAR app, allows users to explore the marine animals, coal-age plants, and Ice Age mammals that inhabited Indiana during distinct ages in our state's geologic history. During the Paleozoic Era, Indiana was covered by a broad, shallow sea teeming with marine invertebrate organisms. Later during the Pennsylvanian Period, abundant plant life flourished and contributed organic matter for the formation of Indiana's coal beds. Finally, during the Pleistocene Epoch, large animals roamed the landscape carved by glacial ice sheets that advanced southward from Canada.

Learn more about each fossil in the 2018 CalendAR by clicking the images below.

Brachiopods are invertebrate marine animals that secrete protective calcareous shells. Found in Indiana only in strata deposited 600 to 250 million years ago, they resemble clams but are a distinct phylum of marine animals. Unlike clams, oysters, and other bivalves, brachiopods have bilateral symmetry in which the right half of each shell (called a valve) is a mirror image of the left half. Brachiopods feed by slightly opening their valves, allowing water to circulate within the shell. They attached to the sea floor in a variety of ways; some had a fleshy stalk (called a pedicle), some anchored with spines, and others had a beak that pushed into soft mud or lay loose on the sea floor. Frequently, their shells feature a trough-like depression (called a sulcus) on the pedicle valve. The sulcus is visible in the Ordovician-age Vinlandostrophia clarksvillensis here. Brachiopods are among the most common fossils in Indiana rocks. While some modern species live in shallow seas today, most brachiopods did not survive the mass extinctions that occurred at the end of the Paleozoic Era.

Trilobites are extinct marine arthropods, distantly related to modern lobsters, horseshoe crabs, and spiders. Trilobites once thrived on every continent from the Cambrian to Permian Period, approximately 520 to 240 million years ago. Trilobites were covered by a calcified exoskeleton that divided its body into three main parts: the head (called a cephalon), segmented thorax, and tail (called a pygidium). Two grooves down the thorax divided it into three lobes, thus the name tri-lobe-ite. The cephalon, thorax, and pygidium were connected by a flexible organic material (called chitin), making it possible for a trilobite to curl itself into a ball when threatened by a predator or during a storm that would agitate the sea floor. This defensive position is shown in the Devonian-age trilobite Phacops bufo here. One of the most diverse classes of organisms, trilobites displayed a wide diversity of size and shape. Most were small, from 1/4 inch to about 3 inches in length; a few, from 19 to 30 inches in length, were giants. Most specimens found in Indiana are less than 2 inches long.

Horn corals were immobile marine invertebrates that secreted a protective calcareous cone or tube. A soft-bodied animal (called a polyp) lived inside the wrinkled outer tube structure (called a corallite), which grew upward as the animal aged. Unlike colonial corals, horn corals were solitary creatures, and their remains are found as conical-shaped corallites. The Cyathophyllum palum here is an excellent example of a Devonian-age solitary horn coral. Horn corals lived on the sea floor or in reef frameworks. Radiating partitions (called septa) divided their interior and extended down the length of the corallite. Tentacles on top of the corallite captured small fish or other organisms, which were ingested through the mouth at the top of the polyp. Found readily in strata deposited 480 to 350 million years ago, horn corals were abundant in the shallow sea that once covered Indiana. They ranged in size from less than 1 inch to 4 feet in length and peaked in diversity during the Devonian Period. Like other rugose and tabulate corals, they did not survive the mass extinctions that occurred at the end of the Paleozoic Era.

Seed ferns are extinct plants that thrived in the warm swampy forests that existed 310 million years ago. Unlike the deciduous forests seen in Indiana today, seed-bearing plants, rushes, and scale bark trees dominated the Pennsylvanian-age forests. These plants (called gymnosperms) were the dominant plant types of the period, as flowering plants did not yet exist for another 100 million years. Seed ferns are often preserved in rock strata as a mold, cast, or carbon film. They are named for their fernlike foliage, and, unlike true ferns, they reproduced with seeds. Seed ferns grew in vine or treelike forms, ranging from 5 to 30 feet in height. Multiple clusters of leaflets (called pinnae) grew on a blade to form the fern frond. The frond of the Pennsylvanian-age Alethopteris sullivantii here shows many small individual pinnae.

Plants with jointed stems are an extinct relative of horsetails that grew in Indiana 320 to 300 million years ago. Unlike modern herbaceous species, these plants were treelike rushes that grew over 60 feet tall. They were a prominent plant in the coal-producing swamp forests that existed during the Pennsylvanian Period. Jointed stem horsetails had woody, hollow stems with segmented sections and distinct vertical ribbing. The branches and leaves (called Annularia) were gathered in a starburst-like shape, and the leaves grew in clusters of eight or more. The segmented grooves (called a node) of Calamites suckowi stem is shown here.

Scale trees are an extinct plant that flourished 310 million years ago in Indiana's humid swamp forests. Relatives of modern club mosses, these trees (called lycopods) grew up to 140 feet tall and featured scaly bark, cones, and thick roots. Scale tree trunks could grow to be over 6 feet in diameter and were composed mainly of soft photosynthetic tissue. Two bifurcating branches grew at its peak, and shallow-rooted rhizomes extended from its base. Clusters of long, narrow leaves grew along the tree's trunk and branches. As the plant grew, leaves dropped off the trunk and left distinct diamond-shaped scars. The tightly arranged scars of Lepidodendron are shown here.

Mammoths lived on the margins of a massive ice sheet that covered Indiana during much of the last 2.6 million years. Related to modern elephants, these giant animals (called megafauna) roamed grasslands south of the glacial margin. They went extinct approximately 10,000 years ago as a result, in part, of climate change and human predation. Mammoths had high peaked foreheads, high shoulders, and fatty humps on the neck. They weighed 8,000 to 12,000 pounds and grew up to 14 feet tall at the shoulder. They are easily identified by their protruding curved tusks that grew up to 12 feet long and large teeth (called molars) that were up to 8 inches tall and 12 inches wide. The molars contained a series of closely spaced flat-crowned ridges of alternating dentine and cement. Mammoths were herbivore grazers, using their ridged molars to chew grasses and other soft plant material in a grinding motion. The flat-crowned platy ridges of the Mammuthus primigenius molar are visible here.

The saber-toothed cat is an extinct animal that lived in Indiana 500,000 to 9,400 years ago. They roamed the margins of woodlands and brush plains that existed south of the glacial ice sheet. Saber-toothed cats (sometimes called saber-toothed tigers) were among the giant Ice Age mammals called megafauna, and weighed from 350 to 620 pounds. They measured about 5.8 feet from tail to snout and grew up to 3.3 feet tall at the shoulder. As large carnivores, saber-toothed cats used their flat, 7-inch-long upper canine teeth to puncture and slice prey. Their bladelike cheek teeth (called carnassial) were used to shear their food. The carnassial tooth of Smilodon fatalis is shown here.

The flat-headed peccary, an extinct relative of modern pigs, lived in Indiana during the last Ice Age. Similar to present-day peccaries and wild pigs, they traveled in small herds and were relatively gregarious. Their fossils are present in Indiana cave deposits, with the largest known concentration of remains in the Megenity Peccary Cave in Crawford County. Flat-headed peccaries were browsing omnivores that ate coarse vegetation and small invertebrates. Reaching up to 3 feet in height, they were larger than modern peccaries. They had sharp, downward-pointing upper canine teeth, a long, deep snout, and long legs. The short, simple molars of Platygonus vetus are shown here. Peccaries were well adapted for combat against predators, such as black bears and wolves. There is no evidence of human predation in the species' extinction. Peccaries disappeared from Indiana approximately 10,000 years ago, when many large animals went extinct at the end of the Pleistocene Epoch.


The 2018 CalendAR app was a collaborative project of the Indiana University Paleontology Collection, Indiana Geological and Water Survey, and School of Informatics and Computing at Indiana University-Purdue University of Indianapolis. This project was made possible in part by the Institute of Museum and Library Services grant MA-30-16-0458-16 to G. Motz et al.