The Indiana Geological and Water Survey (IGWS) has had its own geophysical logging equipment and borehole logging program since 1953. The geophysical log database, logs, and equipment are currently managed by the Environmental Geology Section. Initially, the IGWS used resistivity and spontaneous potential (SP) tools to log bedrock units in drill holes located throughout the state. In 1976, the IGWS acquired a logging unit that could record natural gamma-ray radioactivity as well as resistivity and SP. In all, more than 4,800 logs have been collected from predominantly shallow boreholes (fig. 1). The log data provide a basis for IGWS bedrock and glacial-terrain studies, including regional-scale mapping, 1:100,000-scale quadrangle mapping, and concentrated countywide environmental and seismic-risk analysis.

Since the mid-1970s, the IGWS has worked with water-well drilling contractors, environmental consultants, and government agencies to acquire gamma-ray logs and collect samples of unconsolidated Pleistocene and recent materials from water, monitoring, and test wells immediately after they were drilled. A large number of the IGS-acquired geophysical logs available for download at this Web site were run using the "slow-logging" technique (Bleuer, 2004). In logging these unconsolidated sediments, the logging speeds are slow (5 ft/min) and the time constants are high (5 secs) (Bleuer, 2004). Analog output is plotted at a depth scale of 10 ft/in and a rate scale of 100 counts/sec (100 counts equals 75 API units) on a 5-inch-wide plot (fig. 2). See Bleuer (2004) for additional information about the history of the downhole logging and sampling of unconsolidated Pleistocene and recent materials by the IGS.

The IGWS is also a repository for other borehole geophysical logs, which have been run primarily in petroleum exploration wells by commercial geophysical logging companies. The majority of the commercial logs on file are from boreholes located in Indiana; however, there are selected logs from drill holes in adjacent states. Copies of these logs are available from the IGS Subsurface Geology Section. 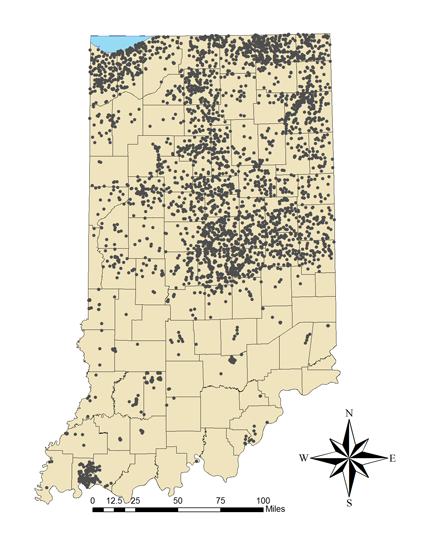 Programs available to assist in viewing the scanned logs are AutoCad, RockWorks, and Neuralog. BlueView software is offered for download by Schlumberger here .