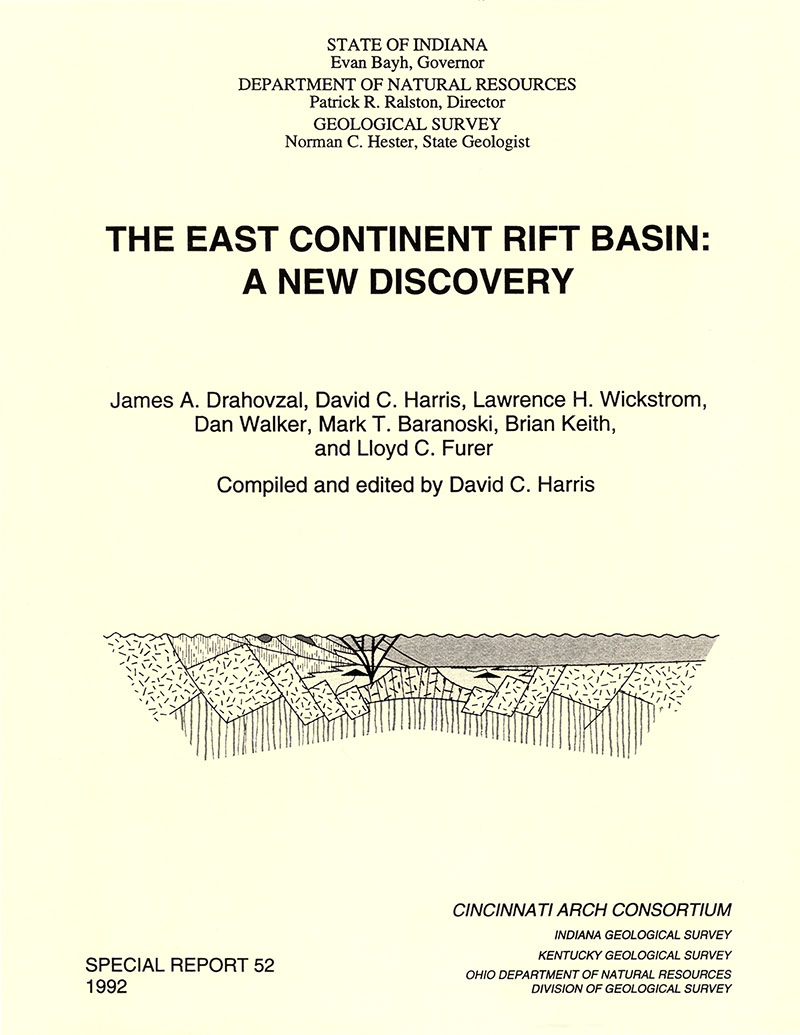 The presence of Precambrian sedimentary basin in the eastern Midcontinent, while suspected from geophysical evidence for years, was not proven until the Ohio Geological Survey cored lithic sandstone below the Mount Simon Sandstone in Warren County, Ohio, in 1988. This sandstone, the Middle Run Formation, was deposited in a fault-bounded basin herein named the East Continent Rift Basin (ECRB). Gravity and magnetic data, well samples, cores, geophysical logs, and seismic reflection data have been used to interpret the extent, origin, evolution, and economic potential of the basin. The known distribution of the Middle Run Formation extends from Putnam County, Ohio, in the north, to Jessamine County, Kentucky, in the south, and to Fayette County, Indiana, in the west. Middle Run clastics are unconformably overlain by the Cambrian Mount Simon Sandstone in most areas. The age of the Middle Run Formation is interpreted to be Precambrian, based on its stratigraphic position and lithologic similarity with known Precambrian sandstones in the Great Lakes region. Sandstones are red-gray lithic arenites containing abundant volcanic rock fragments, and were deposited in an arid continental setting. Basalt overlies and is interbedded with Middle Run clastics in two wells. Trace-elements geochemistry of these associated basalts is similar to Keweenawan continental flood basalts in the Lake Superior area. The basin in which the Middle Run Formation was deposited is bounded on the east by the Grenville Front and on the west by normal block faulting. Gravity and magnetic data suggest that the basin is connected on the northern end with the Midcontinent Rift System (MRS) in southern Michigan. The southern boundary is poorly defined, but the basin may extend into northern Tennessee. Magnetic modeling and seismic interpretation indicate that the basin deepens eastward, reaching depths of 27,000 feet below sea level on its eastern side under the Cincinnati Arch. The sedimentary and volcanic fill is as much as 22,500 feet thick. Structural interpretations of seismic data indicate that the basin predates the Grenville Orogeny, and has been overridden in part by Grenville thrust sheets. Based on the association of basalt flows with continental red beds, geophysical continuity with the MRS, block-faulted boundaries, and a pre-Grenville timing, the ECRB is interpreted to be an eastern branch of the MRS. Rifting is interpreted to be middle Proterozoic (Keweenawan) in age, but reliable dates are presently lacking. Structures associated with the ECRB were reactivated at various times during the Phanerozoic, and may have influenced Paleozoic stratigraphy. No evidence of hydrocarbon source or reservoir rocks has been found within the basin to date, although most of the basin remains undrilled.