Geology and coal deposits of the Clinton area, west-central Indiana (1989) 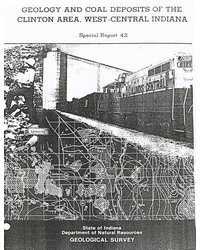 The Clinton area, a 260-square-mile tract north of Terre Haute, Ind., has been one of the most productive coal-mining areas of the state, yet still contains 1,350 million tons of bituminous coal resources, or about 1/26 of the coal resources of Indiana. Resources and recoverable reserves were calculated for four major coals that are 4 to 6 feet thick in most places. Most of this coal, of high-volatile C bituminous rank, must be extracted by underground mining, but some of it can be mined by surface methods. About 700 million tons of these resources are recoverable reserves, assuming 50-percent recovery for underground mines and 80-percent recovery for surface mines. Nearly two-fifths of the recoverable resources are in the deepest commercial coalbed, the Seelyville Coal Member (III). Eight hundred feet of sedimentary strata of Pennsylvanian age in the Clinton area contain 25 coalbeds. Only the middle 300 feet of these strata contain coal of commercial thickness and extent. Most of the other coalbeds are irregular in thickness and distribution. Rocks overlying the coal include principally shale and sandstone with thin beds of coal, limestone, and underclay. These rocks are overlain by glacial drift averaging about 50 feet in thickness, and the drift is overlain by alluvium in stream valleys and by windblown sand and silt on upland areas. Where they crop out, strata appear as nearly horizontal beds; they dip less than one-third of a degree to the southwest. Gentle folds of the strata, however, cause hills and swales that hamper mining in the coalbeds. Roof conditions for mining are variable. The best roof is formed by carbonaceous black shale that commonly overlies the Springfield Coal Member (V). An intermediate roof is formed by gray shale that overlies the Survant Coal Member (IV). An intermediate to poor roof is formed by gray shale that commonly overlies the Sellyville Coal Member (III). And finally, a rather poor roof is formed by blue-gray mudstone that in some places overlies the Danville Coal Member (VIII). Coal has been mined underground from depths as great as 500 feet, and it is now (1986) being mined from open pits with as much as 150 feet of shale and glacial-drift overburden. One large mine remains open, the Universal Mine of the Peabody Coal Co. From 1970 to 1985 annual production from this strip mine ranged from 0.9 to 3.0 million tons.