Alluviation of the Ohio River valley near Evansville, Indiana, and its effect on the distribution of sand and gravel in the area (1986) 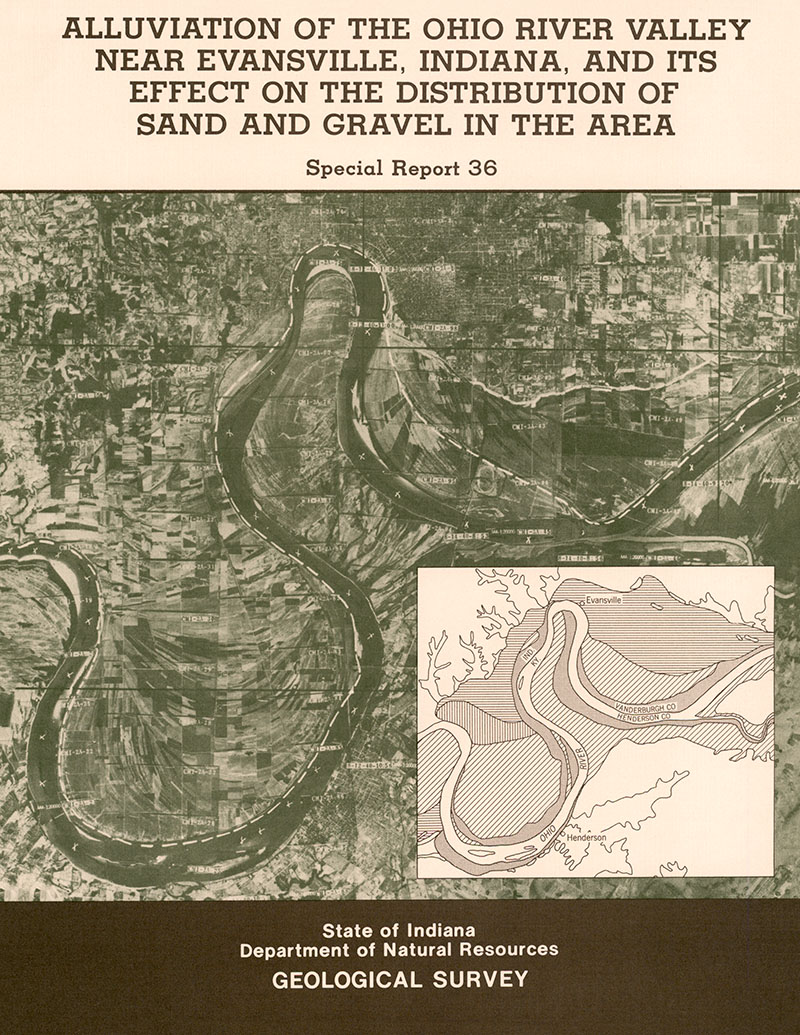 Item Number: SR36
Read Online
Alluvium in the Ohio River valley near Evansville was deposited in four distinct episodes. The deposits of each episode can be distinguished by grain size and stratigraphic position and also by relict geomorphic features for some deposits.

The bedrock valley, developed during late Tertiary or early Quaternary time, consists of steep valley walls, two unpaired terrace levels, and a narrow, deep trough. These features were formed during stepwise erosion of the Lexington Plain (Highland Rim Plain). Four depositional units can be recognized in the valley fill. The basal alluvium consists of consolidated gravel, sand, and mud deposited during a pre-Wisconsinan, possibly Illinoian, ice advance and later retreat. These deposits were eroded before Woodfordian ice advanced and a nearly level valley floor was formed. During the Woodfordian Subage of Frye and Willman (1960), two ice advances into the Miami-Whitewater basin supplied sediment to the Ohio River. Braided streams deposited relatively coarse sediment during each of the two ice advances, but the streams differed in caliber of load and style of deposition. Braided-stream deposits of the two depositional episodes in the Evansville area are separated by an erosion surface formed during temporary retreat of the ice from the basin. After final retreat of the ice another period of erosion produced a locally scoured surface on which sediments of Holocene age were deposited. These are markedly finer grained than the underlying Pleistocene braided-stream deposits, and they accumulated in a meandering stream. The only potential sand and gravel deposits in the area are those found in the valley-train sediments of Wisconsinan age. Pre-Wisconsinan gravels are well graded but are too deeply buried to have economic potential. Holocene channel sediments are near the surface but are too fine grained to supply coarse grades of aggregate. Valley-train sediments under the upper and lower terraces are relatively coarse grained and are buried by only moderate amounts of overburden; valley-train deposits under the modern flood plain are coarser grained but deeply buried.

Sand and Gravel Resources of Indiana

Tidal rhythmites and their applications