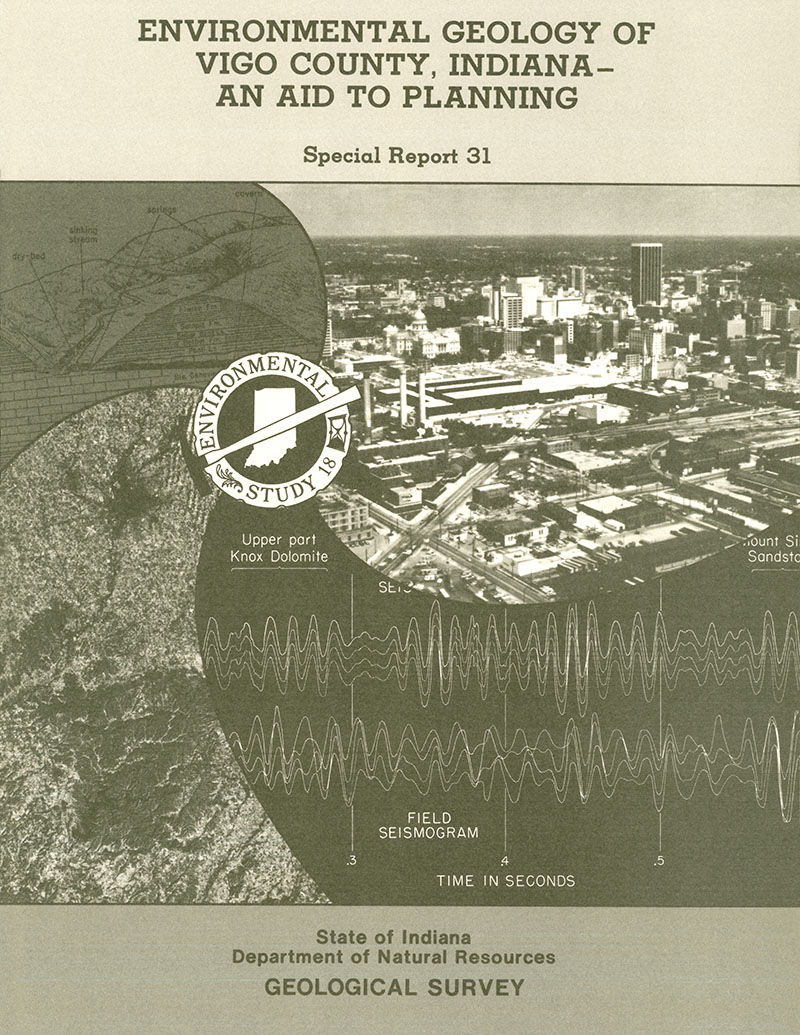 This report is designed to provide background information for planning the best use of the mineral and other geologically related resources of Vigo County and to direct attention to potential geologic hazards. Much of the landform development of the county is glacial in origin. Glacial till and loess form the uplands, valley-train deposits from the terraces, and alluvium forms the flood plains. The surface formed by these materials also generally reflects, in a somewhat subdued manner, the surface of the underlying bedrock. Drift ranges from less then 10 feet to more than 100 feet in thickness, and it covers an erosion surface developed on Pennsylvanian sandstone, shale, limestone, and coal. Beneath these rocks lies a thick sequence of older sedimentary rock. This entire sedimentary sequence lies on granitic basement-complex rocks. Natural resources developed in Vigo County are coal, petroleum, clay, sand and gravel, and water. Coal, petroleum, sand and gravel, and water are still important resources, but clay is minor. The most desirable and easily obtained mineral resources have been developed; reserves that are still large but more expensive to develop are left. Ground water of variable quality is available in small quantities nearly everywhere in the bedrock. Bedrock wells are generally completed in sandstone, but some are completed in jointed shale or coal. Aquifers in the unconsolidated material consist of outwash in the Wabash Valley and its tributaries and intertill and intratill sand and gravel lenses in the glacial-till uplands. Nearly all water supplies in the country are derived from ground water. Definite water-quality patterns are evident in sections of different aquifers. For example, concentrations of sulfate, nitrate, calcium, and magnesium are high in the glacial-outwash aquifers, and sodium, phosphate, and fluoride are high in the bedrock aquifers. Concentrations of these elements and compounds are normally within limits recommended for drinking water. Geologic conditions appear to be satisfactory for establishing sanitary landfills and septic systems in significantly large sections of the country. The till uplands are the most environmentally sound areas for both applications, but detailed study is required to ascertain the suitability of a given site. Most near-surface materials in Vigo County have sufficient bearing capacity for large buildings. Poorly drained depression areas filled with organic-rich clay and silt should be avoided, but these are not widespread. Poor drainage and readily eroded soils are likely to present the greatest construction problems.