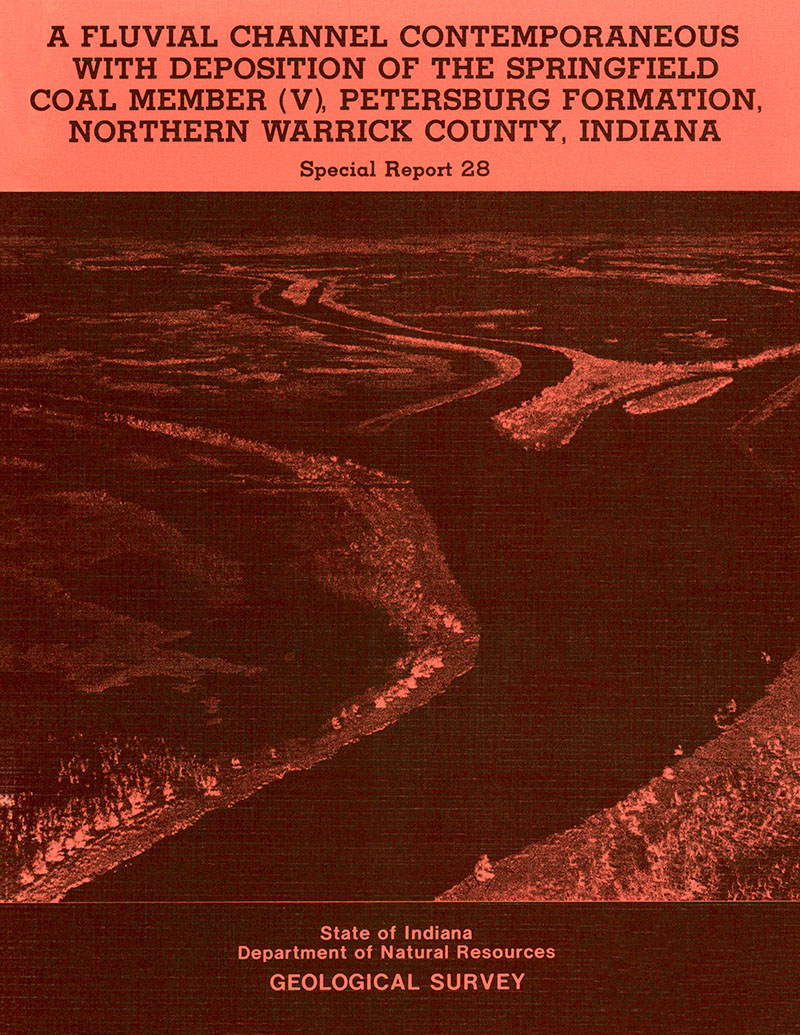 The Springfield Coal Member (V) of the Petersburg Formation is split into tow or more coal seams in northern Warrick County, Ind. This body of split coal is 1 to 4 miles (1.6 to 6 km) wide and more than 40 feet (12 m) thick in places and can be mapped from exposures in surface mines in sec. 7, T. 5 S., R. 7 W., and sec. 12, T. 5 S., R. 8 W., to secs. 2 and 3, T. S., R. 9 W., where it enters Gibson County, a distance of 16 miles (26 km). The lithologies within the split consist of rash, gray mudstone, siltstone, and sandstone. Grain size of the clastic rocks increases from the flanks of the zone toward the center. The center of the zone is dominated by crossbedded sandstone that commonly shows cut-and-fill relationships, and in some places the upper seam of Springfield coal is absent. Plant fossils are present in all lithologies that split the Springfield. Sandstone rather than underclay occurs locally below the lower split coal. In the basal part of the Dugger Formation, several marine beds that normally overlie the Springfield think or pinch out above areas where the split is thick and are replaced by thin marine mudstones. The split beds of the Springfield in Warrick County are believed to have been formed by a fluvial-channel system that was partly contemporaneous with peat deposition and that was abandoned before the termination of peat accumulation. The term Folsomville Member is proposed for the group of clastic beds that split the Springfield Coal Member, and the term Leslie Cemetery Channel is proposed for the paleoenvironmental feature. Thicker high-sulfur Springfield coal was deposited in a trend paralleling this channel system. Where the Springfield coal is split by this channel system, the lower split of the seam may be a modest low-sulfur coal reserve.

Map showing the depth to the top of the Springfield Coal Member in Gibson, Pike, Posey, Warrick, and Vanderburgh Counties