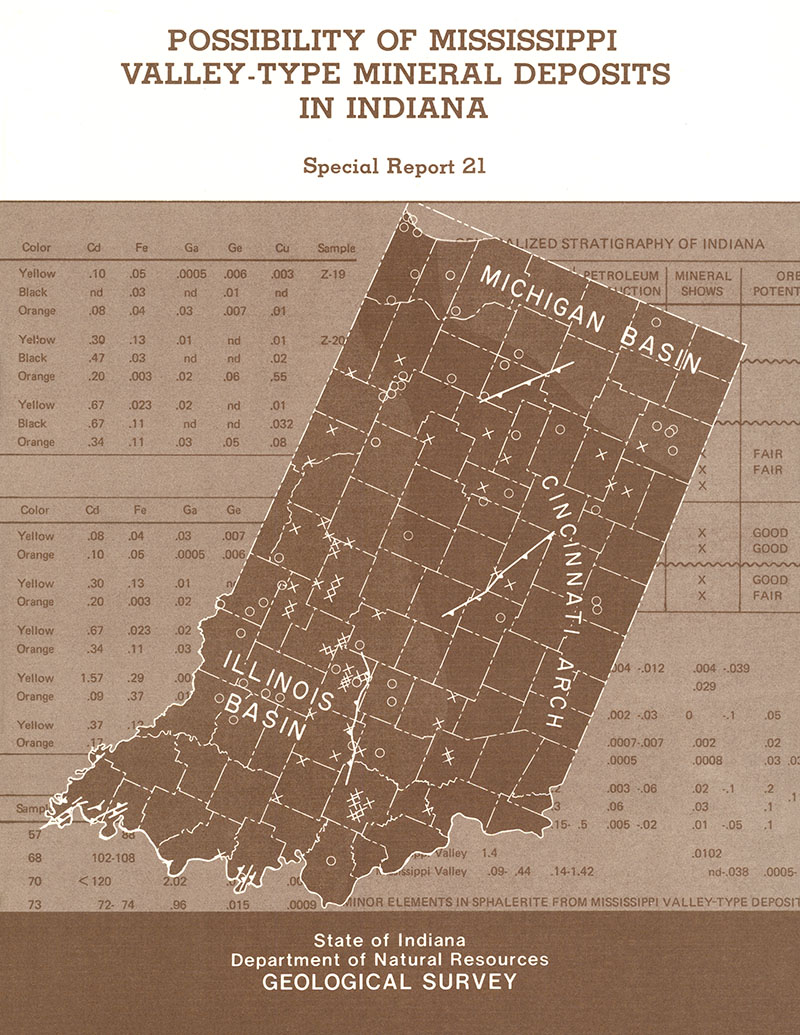 The midwestern United States is recognized as a lead-zinc metallogenetic province because of its low-temperatures Mississippi Valley-type ore deposits. These deposits are found in Paleozoic dolomitic host rocks, commonly on the flanks of structurally high areas far from areas of igneous activity. They have simple mineralogies, mostly sphalerite, fluorite, galena, or barite, that are believed to have formed at low temperatures (70 to 200C) from concentrated brines. One commonly accepted explanation of the origin and characteristics of Mississippi Valley-type deposits is that they were the natural consequence of basin development when sedimentary connate waters, the metal-bearing brines, migrated updip from the basin and precipitated ore minerals on encountering sources of reduced sulfur. Indiana lies within a structural framework and contains many geologic features that appear suitable for the development of Mississippi Valley-type deposits. A structurally high area, the Kankakee and Cincinnati Arches, crosses Indiana from northwest to southeast and separates the Michigan and Illinois Basins. Potential-ore host rock occurs in the Knox Dolomite (Cambro-Ordovician); the Black River and Trenton Limestones (Ordovician); the Salamonie Dolomite, the Louisville Limestone, and the Wabash Formation (Silurian); the Muscatatuck Group (Devonian); and the Sanders and Blue River Groups (Mississippian). Unconformities are at the top of the Knox, the Trenton, and the Wabash. Many occurrences of sphalerite, fluorite, barite, and galena in Indiana had already been noted, and more than 90 new ones were found during this study. Most new occurrences were in the Black River-Trenton section, especially in northern Indiana where the rocks had been extensively dolomitized. In northern Indiana many minerals occur in the dolomitized reef facies of the Silurian System and in the overlying Devonian limestones. In southern and southwestern Indiana sphalerite and fluorite occur in the Salem and Ste. Genevieve Limestones. Preliminary information from fluid inclusions in sphalerite samples indicates that some specimens formed at temperatures within the range reported for Mississippi Valley-type deposits. Favorable geology, ore minerals in minor amounts, and tentative evidence that ore-type fluids passed through suitable host rocks indicate that undiscovered Mississippi Valley-type ore deposits possibly exist in Indiana.

Bedrock geologic map of the west half of the New Castle 30 X 60 minute quadrangle, central Indiana

The Salem Limestone in the Indiana Building-Stone District