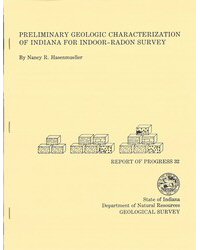 INTRODUCTION: The Indiana State Board of Health, with assistance from the U.S. Environmental Protection Agency (EPA), expanded the program to assess indoor-radon levels in homes in the state during the 1987-1988 heating season. Radon is a naturally occurring gaseous radioisotope in the uranium-238 decay chain. Because radon is released from bedrock and unconsolidated materials containing the parent isotopes, the first step in conducting an indoor-radon survey was the geologic characterization of Indiana. In July 1987 the EPA requested assistance from the Indiana Geological Survey in preparing a geologic characterization of the state. This report fulfills that request; it includes brief descriptions of bedrock and unconsolidated materials exposed at or near the surface in Indiana, divides the state into eight geologic regions, and describes the relative radon-potential of areas within those regions. At the request of the EPA, areas within Indiana were given radon-potential ratings of low, low/moderate, moderate, moderate/high, or high. The radon-potential ratings shown in plate 1 are based on the composition of the bedrock and unconsolidated material, soil permeability, and uranium anomalies shown on the National Uranium Resource Evaluation (NURE) uranium-anomaly interpretation maps (EG&G geoMetrics, 1980a, 1980b, 1981a-f; Geodata International, Inc, 1980?; Texas Instruments Inc., 1979). The uranium-anomaly data were gathered during the National Airborne Radiometric Reconnaissance part of the NURE program. Within many counties areas of differing radon potential exist.

Natural brines of Indiana and adjoining parts of Illinois and Kentucky