Some Pennsylvanian Kirkbyacean Ostracods of Indiana and midcontinent series terminology (1974) 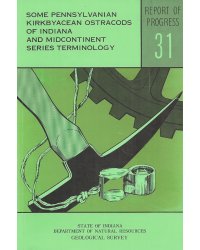 Fifteen species of ostracods belonging to the families Amphissitidae Knight and Kirkbyidae Ulrich and Bassler are found in the fossiliferous marine zones at 31 localities in the lower and lower middle Pennsylvanian rocks of Indiana and adjacent Kentucky. One new species, Kirkbya fuldaensis, is established. Two zones in the lower and lower middle Pennsylvanian section are based on the ostracod assemblages. The older zone, possibly but not certainly confined to the Mansfield Formation of Indiana and equivalent rocks of Kentucky, is characterized by Amphissites rothi Bradfield, and the younger zone, including the Staunton Formation and younger rocks of Indiana and equivalent rocks of Kentucky and Illinois, is characterized by Amphissites centronotus (Ulrich and Bassler). The Brazil Formation, which is stratigraphically between the Mansfield and Staunton Formations, has no named marine fossiliferous members, but lower and upper parts of it are tentatively assigned to the two fossil zones on the basis of faunas whose formational assignments are not quite certain.