Outcrop features of the Mansfield Formation in southwestern Indiana (1962) 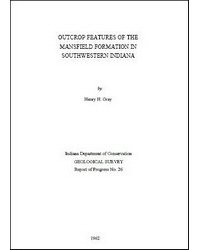 The Mansfield Formation of early Pennsylvanian age crops out in an area of approximately 1,700 square miles in southwestern Indiana. Three-fifths of the formation consists of sandstone; most of the remainder is finer clastic rocks. Limestone, chert, coal, and iron ore make up approximately 2 percent of the formation. Many similar rock types are found among the several formations upon which the Mansfield unconformably rests, but the assignment of questionable outcrops either to the Mansfield Formation or to an older formation can usually be accomplished with some confidence, because many outcrops contain either diagnostic rock types or indicative rock features. The various rocks of the Mansfield Formation are, for the most part, arranged in a crudely cyclic pattern. The several cyclic units of a region tend to be similar in makeup and different f rom those of adjacent regions. Three lithofacies that reflect these areal variations can be recognized and are here named: the Shoals Lithofacies is characterized by cross-stratified sandstones, the Bloomfield Lithofacies by gray shales, and the Cannelton Lithofacies by mudstones and thick clays. The distribution of these lithofacies suggests that these rocks were deposited at or near the shoreline, that there was a fairly large delta in the southern part of the outcrop area, and that this delta was an important factor controlling the sedimentary pattern during early Pennsylvanian time.