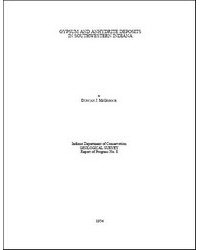 This report discusses the production and uses of gypsum and the types of gypsum and anhydrite deposits, their physical and chemical properties, geologic association, and theories of origin. Subsurface studies in southwestern Indiana have revealed rather extensive gypsum deposits in the lower part of the St. Louis limestone. Stratigraphic analysis of this evaporite unit indicates that gypsum (CaSO4. 2H2O) and anhydrite (CaSO4) accumulated in small basins within larger basins (intrasilled basins). The isopach map (pl. 1) suggests that three major intrasilled basins exist in southwestern Indiana and that these basins are aligned in a northwest- southeast direction that corresponds to the trend of the rock formations. The isopleth map (pl. 2) indicates that the maximum accumulation of the evaporites corresponds to the geographic locations of the intrasilled basins. The broad up-and-down movement of the earth's crust (epeirogenic movement) caused the formation of a submarine topography which affects evaporitic environments. Epeirogenic movement, which probably was cyclic, is reflected in a depositional pattern that changes from normal open-sea circulation to a restricted-sea environment and then returns to normal open-sea circulation. The evaporite cycle of marine, 1 penesaline, 2 and marine results from both tectonic and environmental causes.