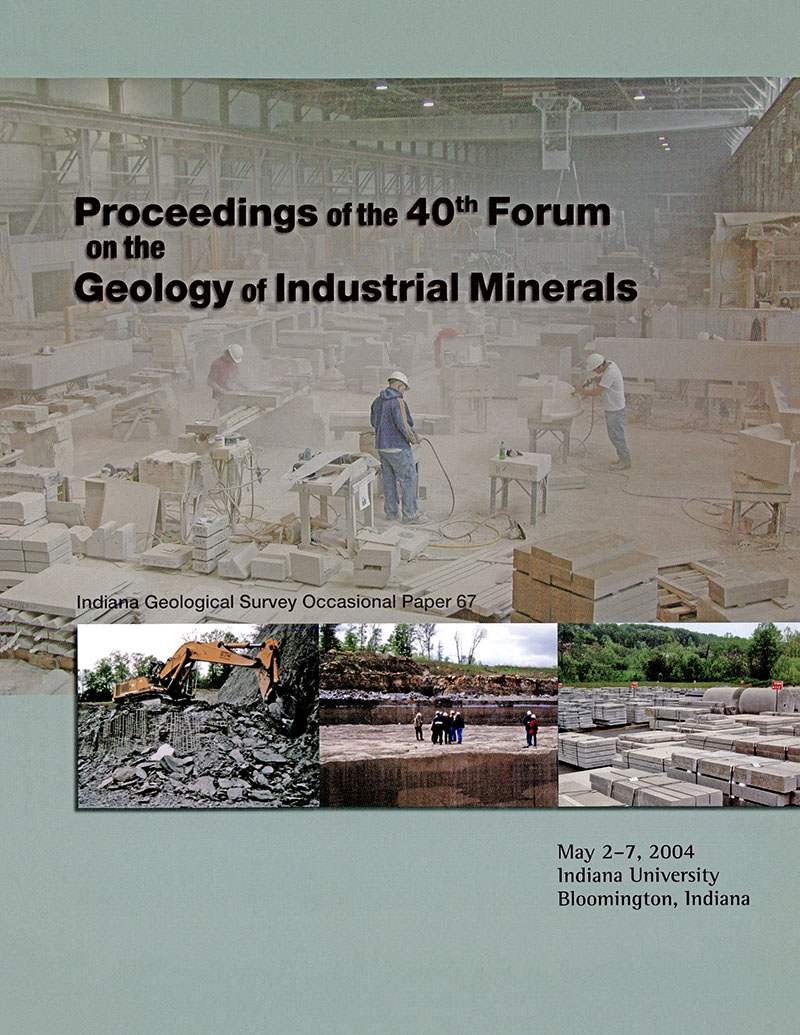 The 40th Forum on the Geology of Industrial Minerals was held in Bloomington, Indiana, from May 2 to 7, 2004. This Proceedings volume includes 21 papers covering many aspects of industrial minerals, from petrology and geology to economics of production and new technologies: Sonic drilling technology: A look at a unique methodology for determining subsurface lithology, by Timothy J. Augustine; An introduction to diamond tools and their application in the stone industry, by Ken Barnes; Overview of reported water withdrawals by the mineral aggregate industry and the potential utilization of the discharged water for alternative needs, by Mark E. Basch; Microgravity: An Economical Tool for Delineating Voids, by Jeff Bray and J. David Scott; Engineering implications of petroleum contents and carbonate aggregate mineralogy, by L. Lynn Chyi, Harshad L. Pandit, and Robert Y. Liang; The relationship of unconformities to the genesis, alteration, and preservation of bauxite and high-alumina kaolin deposits in the Andersonville District, Georgia, by Mark D. Cocker; Public awareness and the status of industrial minerals in Alberta, by W. A. D. Edwards; Characterization of sand and gravel deposits using S-wave refraction surveys, by Karl J. Ellefsen and William H. Langer; Petrologic controls for fluorspar deposits at Okorusu, Namibia: Hydrothermal replacement of carbonatite, marble, and fenite, by Richard D. Hagni; The Cleves Tunnel, a rare extant example of the use of Buena Vista stone for a canal structure near Cincinnati, Ohio, by Joseph T. Hannibal and Richard Arnold Davis; The Euclid bluestone of northeastern Ohio: Quarrying history, petrology, and sedimentology, by Joseph T. Hannibal, Benjamin A. Scherzer, and David B. Saja; Teaching with tombstones: Geology at the cemetery, by Joseph T. Hannibal; Rare earths in selected U.S. defense applications, by James B. Hedrick; Karst problems in mining of salt deposits in the United States, by Kenneth S. Johnson; Geologic context for industrial minerals of the midwestern United States, by Brian D. Keith; Evaluation of the sodium-sulfate soundness test for qualifying dolomites of northern Arkansas for construction aggregate, by Stephen W. Kline, Wipavan Phiukhao, Melanie L. Griffin, and J. William Miller; Accelerated weathering of limestone for CO2 mitigation: Opportunities for the stone and cement industries, by William H. Langer, Greg H. Rau, and Ken Caldeira; Industrial clays of the midwestern United States, by Haydn H. Murray; The life and times of the Indiana Limestone Institute, by Jim Owens; Recent trends in the industrial mineral and fuel industry of Indiana, by Kathryn R. Shaffer and Nelson R. Shaffer; Ohio's industrial minerals in the twenty-first century, by Mark E. Wolfe;and abstracts of other presentations (posters and talks for which no papers were submitted).