Underground mines in the Hymera Coal Member (Pennsylvanian) of Indiana (1994) 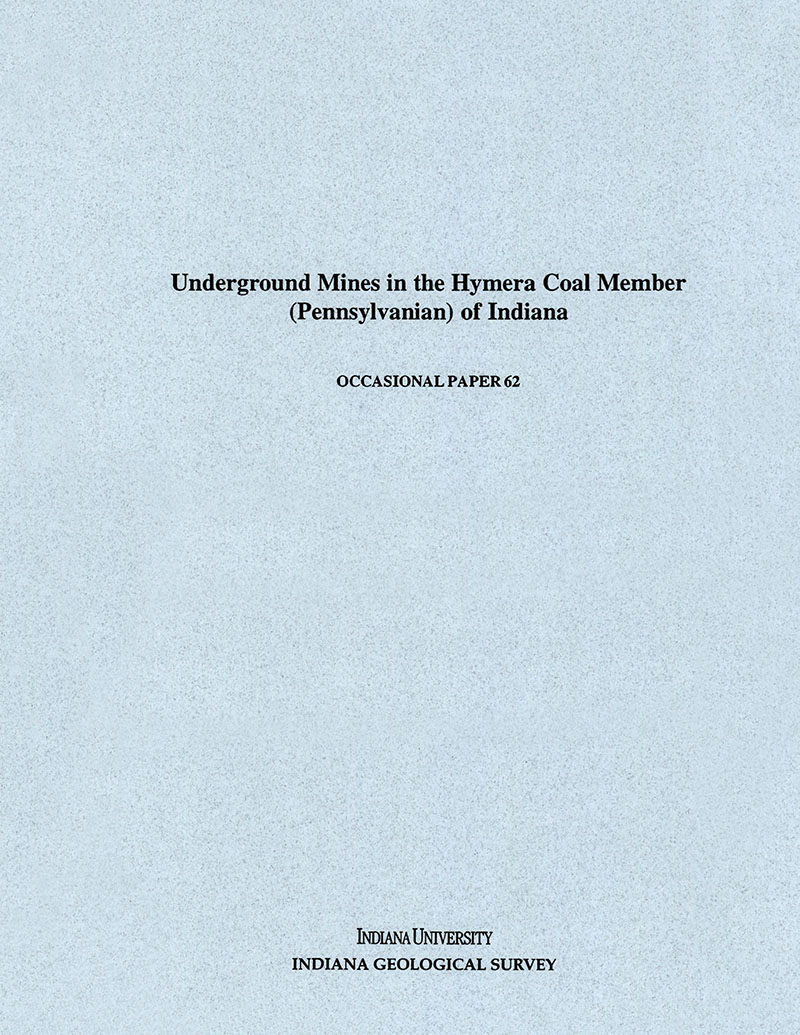 INTRODUCTION: In Indiana almost 90 million tons of coal has been produced by underground mining from the Hymera Coal Member of the Dugger Formation (Pennsylvanian). From 1903 to 1927, more than 1million tons were produced annually from the Hymera (referred to historically as Indiana Coal VI). Production declined drastically during the Great Depression, but there was a revival of underground mining from 1942 to 1962. Little underground mining of the Hymera has been undertaken since 1962, but surface mining, which now dominates the state's coal industry, has drawn heavily from the reserves of that coal bed. This report is based chiefly on drilling records, mine maps, and geologic mining literature in the files of the Indiana Geological Survey. Attention is focused on geologic conditions encountered within now-abandoned underground mines and conditions that limited mining. Much of the text of this report has been taken from previous reports on coal mining in Sullivan and Knox Counties, Indiana (Harper, 1988a, and Harper and Eggert, in press), but this report contains additional maps and information about mining in the Hymera coal bed in Greene and Warrick Counties, and the maps of mining districts in this report are more detailed than those maps in the county reports. These maps provide the evidence that underground mining of the Hymera was limited by geologic conditions, such as split coal, geologic discontinuities referred to as "rolls," and high-ash and possibly high-sulfur coal that was often associated with abnormal thickness of the coal bed. In contrast with some other commercially important coal beds, thin coal (less than 4.5 feet) does not appear to be the primary importance of coal bed thickness to mining productivity, the potential for resumption of underground mining in the Hymera, given certain market changes or technological developments in coal processing and utilization, may be relatively great compared to some other Indiana coal beds. This report describes geologic problems encountered in underground mines of the Hymera coal bed; no attempt is made here to hypothesize geologic controls on the distribution of those problems or to produce predictive models of their occurrence. This is the second in a series of reports; the first dealt with underground mines in the Survant Coal Member of the Linton Formation (Harper, 1988b). Subsequent reports will describe underground mines in the Seelyville Coal Member of the Staunton Formation and the Springfield Coal Member of the Petersburg Formation.

Map showing the thickness and mined out areas of the Danville Coal Member in Gibson, Pike, Posey, Warrick, and Vanderburgh Counties, Indiana

Map showing the depth to the top of the Danville Coal Member in Gibson, Pike, Posey, Warrick, and Vanderburgh Counties, Indiana