Development of the Mississippian-Pennsylvanian unconformity in Indiana (1989) 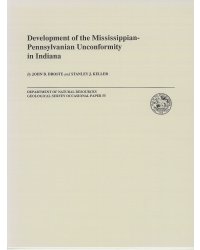 In very early Pennsylvanian time the place now called Indiana was the locus of subaerial erosion. About 8,000 square miles of this landscape is preserved in western Indiana beneath the rocks of the Pennsylvanian System. Data from 20,000 wells provide the evidence to reconstruct this surface and describe its geomorphology. Six ancient physiographic regions that show clear relationships of landform to outcropping Mississippian bedrock have been identified. From north to south a distinctive topography is associated with each of the ancient outcrop areas of (1) the Borden Group, (2) the Sanders and Blue River Groups, (3) the West Baden Group, (4) the Stephensport Group, (5) the Tar Springs Formation through the Menard Limestone, and (6) the Palestine Sandstone through the Grove Church Shale. In northern Indiana the Mississippian-Pennsylvanian unconformity may represent as much as 8 million years of erosion. In southern Indiana that same unconformity may represent less than 3 million years of erosion.

Rocks associated with the Mississippian-Pennsylvanian unconformity in southwestern Indiana

Map showing structure on top of the Mississippian unconformity at NSWC, Crane, Indiana