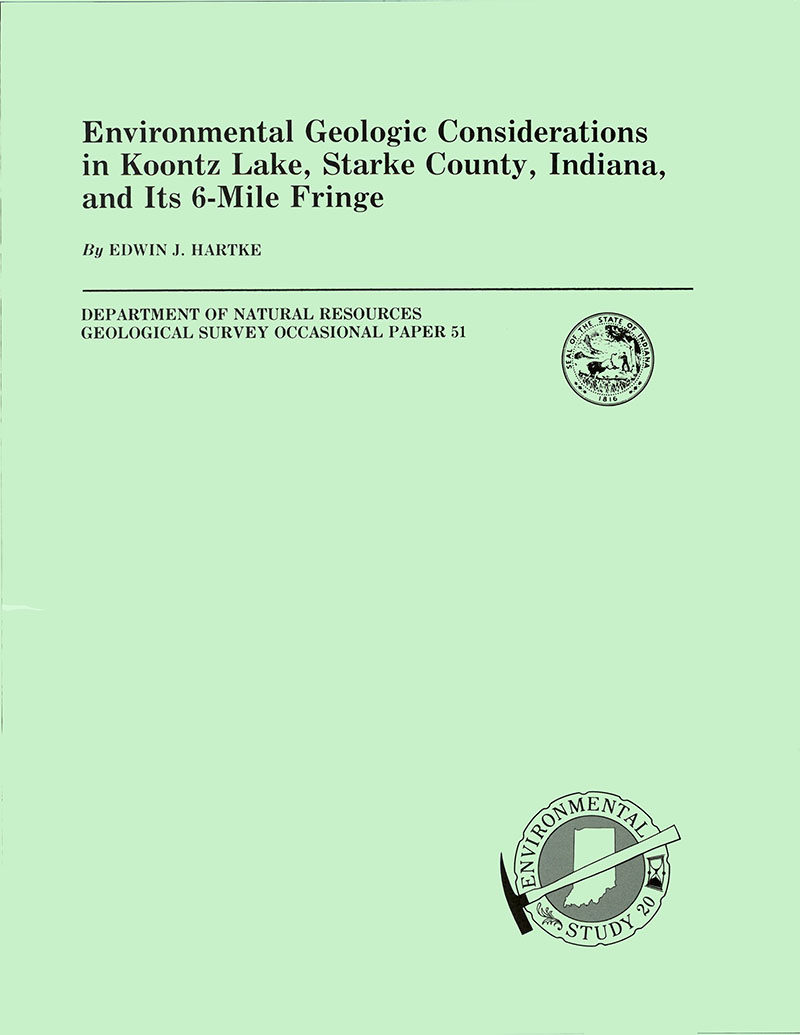 Koontz Lake is a small unincorporated lakeside community of about 1,800 persons. It is partly in northeastern Starke County and partly in northwestern Marshall County. The business district and most of the residences are adjacent to and northwest of the lake for which the community was named. Houses and summer cottages also occupy nearly the entire remainder of the shoreline. Land in the surrounding area is used primarily for agriculture; about 88 percent is farmland and woodland (Barnes, 1982; Smallwood, 1980). The lake (Koontz Lake), around which the community developed, has a surface area of about 350 acres and is fed by Pontius Lake and is probably a water-table lake, some of the implications of which will be discussed farther on. The outlet into Robbins Ditch is controlled by a fixed-crest dam at the west end of the lake. The dam was constructed in 1848 to deepen the lake, and therefore sufficient head to operate a grain mill was created. Because the lake is the focal point for developing the community, care should be taken to ensure that it is protected from harmful stresses. A good perspective of the predevelopment nature of the lake and the surroundings can be gleaned from works by Thompson (1886a, 1886b). Thompson's reports provide observations of topography, glacial geology, soils, and drainage but now are mostly of historical value only. Although the present report applies specifically to one community and one lake in northern Indiana, the pertinent geology and environmental concerns are similar to those of many other communities developed around glacial lakes in northern Indiana. Foremost among the environmental concerns are degradation of water quality and eutrophication. All lakes, as a natural process, begin to die after reaching maturity, but unchecked development as primary concerns in northern Indiana, can greatly accelerate eutrophication. This report was compiled from information assimilated from the files of the Indiana Division of Water and the Indiana Geological Survey. Because existing geologic information for the Koontz Lake area is rather limited, mapping detail and accuracy of the figures in this report are also limited.

Geology as a contribution to land use planning in La Porte County, Indiana