The Salem Limestone in the Indiana Building-Stone District (1982) 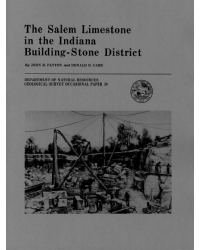 The limestone building material that has dominated the national market for more than a century is produced in the Bloomington-Bedford district of southern Indiana. Through the years the economy of this two-county area has grown and diversified, so that the stone industry no longer holds the prominent position it once held, but its influence on the economy of earlier years and on the established traditions is inescapable. More than 100 buildings on the Bloomington campus of Indiana University are of limestone from the district, as are nearly all government buildings and countless homes and commercial structures in both Bloomington and Bedford. Oolitic, a small town near the center of the building-stone district, traces its name back to the settlement of the area by immigrant stone workers from England who noticed the similarity of the Salem Limestone to the Portland Oolite, a popular building stone in England. The names of buildings, fraternal organizations, and school mascots testify to the influence of the stone industry on the people. The area has had a rich history because of uncommon properties of a common rock, limestone. The building-stone district has attracted geologists, architects, and laymen from all states and many foreign countries, and through the years we have guided hundreds of people through the quarries and mills. Always we have been warmly received by the owners and the workers. Partly on the basis of these tours and on questions that were asked during the tours, we prepared a guidebook that was first used at the meeting of the North-Central Section of the Geological Society of America in Bloomington on April 12, 1980. This paper has been modified from that coverage (Patton and Carr, 1980).