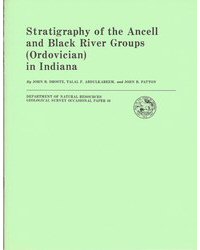 Stratigraphic correlations and nomenclature are here proposed for the Ordovician rocks between the Knox Dolomite and the Trenton Limestone in the Indiana subsurface. We continue the use of names now used in Indiana for some units and propose the adoption of other existing names for certain units traced into Indiana from Illinois. Two groups, and Ancell Group (adopted Missouri-Illinois name) below and the Black River Group (new rank) above, are composed of five formations. The Ancell Group consists of the St. Peter Sandstone and two units with which it is in facies relationship, the Dutchtown Formation (adopted Missouri-Illinois name) below and the Joachim Dolomite above. The Black River Group consists of the Pecatonica Formation (adopted Wisconsin-Illinois name) below and the Plattin Formation (adapted from the Illinois subgroup name) above. The distribution of continuous St. Peter rocks, the sandstone facies of the Ancell Group, is restricted to westernmost Indiana. The carbonate and terrigenous clastic rocks of the Dutchtown are much more widespread, and the carbonate and terrigenous clastic rocks of the Joachim are present throughout Indiana except where erosional topographic highs on the Knox surface lie directly below rocks of the Black River Group. The Pecatonica and Plattin Formation are continuous throughout Indiana. Earlier workers have emphasized the likelihood that some sandstone bodies encountered in wells at this position in the stratigraphic succession and identified as the St. Peter were probably actually part of the Knox. Sandstones regarded as part of the Knox because they are encountered outside the general area in which the St. Peter is expected to be present may be isolated remnants of the St. Peter, and especially in the southeastern quadrant of Indiana, they are even more likely to be what we are here terming the Dutchtown. In the northeastern quadrant of Indiana, they may be sandstone layers within the Joachim.

Conodonts from the Everton Dolomite and the St. Peter Sandstone (Lower Middle Ordovician) in a core from southwestern Indiana

Lithostratigraphy of the Maquoketa Group (Ordovician) in Indiana

Ordovician stratigraphy, and the physiography of part of southeastern Indiana