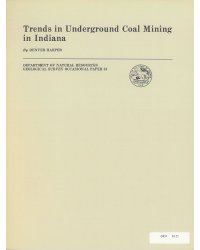 During 1979 about 26 million tons of coal was produced in Indiana, 97 percent of which was derived from surface operations. Surface mining has not always played this preeminent role; underground mining was once the major method of coal extraction in the state. Since 40 percent of strippable reserves has already been exploited, surface mining in Indiana is almost certain to decline within a few decades. Through the years, it has been predicted that this inevitable decline in surface production will be accompanied by a resurgence of underground mining in areas of deeper coals. This plausible prediction is a corollary of the often-repeated assertion that the decline of underground mining in Indiana was related almost solely to the development of surface mining. However, other factors also worked to the disadvantage of producers of coal by underground methods, and some of these other factors will be briefly reviewed in this report.

Geology and coal deposits of the Clinton area, west-central Indiana