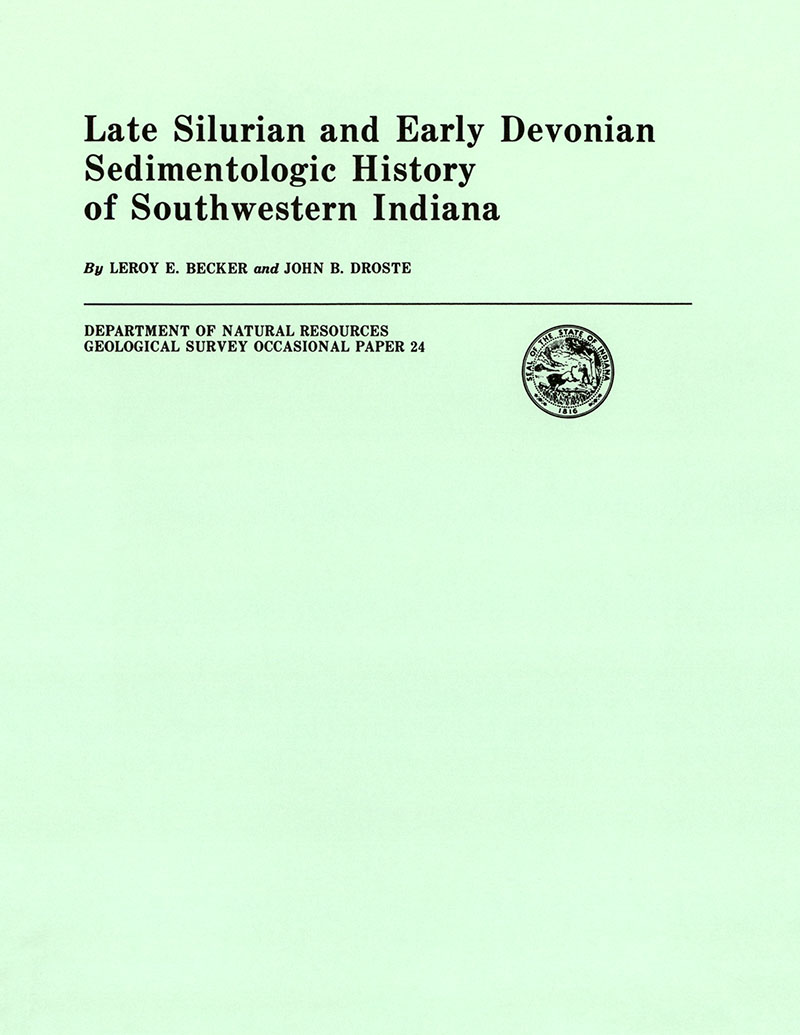 Evidence from geophysical logs and petrographic study of subsurface samples permits interpretation of the sequence of sedimentologic events during Late Silurian and Early Devonian time in southwestern Indiana. The New Harmony Group (new) is proposed for the Lower Devonian rocks in Indiana, and the Bailey Limestone is redefined and placed in the Bainbridge Group (Silurian). The textures of the fine-grained carbonate rocks and terrigenous quartz content of the Moccasin Springs Formation and the Bailey Limestone are very similar. Medium- to coarse-grained bioclastic rocks of the Backbone interfinger with Grassy Knob rocks (below) and Clear Creek rocks (above) that are characteristically speckled (dolomite rhombs and chitinozoans), impure, fine- to medium-grained, and cherty carbonates. Moccasin Springs and Bailey rocks were deposited in deeper water as basin facies of shallow-water reef-bearing Wabash Platform rocks. Fossils indicate that the upper part of the Moccasin Springs and most of the Bailey may be Late Silurian in age; the New Harmony Group is entirely Early Devonian in age. Backbone rocks were deposited on shallow-water shelves that prograded basinward. Grassy Knob and Clear Creek rocks were laid in deeper water basin environments as facies of the shelf rocks. The following sequence of events is postulated: (1) the Moccasin Springs and much of the Bailey formed during the Silurian Period as basin facies of shallow-water carbonate banks on the margin of the Wabash Platform; (2) with Early Devonian lowering of sea level the banks emerged and shallow-water shelf deposition moved basinward; (3) Early Devonian transgression (Grassy Knob) resulted in deeper water sedimentation; (4) regression (Backbone) reestablished shelf sedimentation; (5) transgression (Clear Creek) moved the locus of shelf sedimentation eastward onto the platform. This interpretation suggests that undiscovered pinnacle reefs surrounded by Bailey rocks may lie along the basin margin of the Terre Haute Bank in southwestern Indiana.

Map showing depth to the top of the Devonian and Silurian carbonate rock resource in Bartholomew County, Indiana

Bedrock geology of the southern half of the Knox 30- x 60-minute quadrangle, Indiana