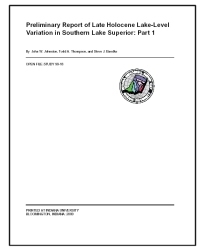 ABSTRACT:The internal architecture and age of development of 60 beach ridges in the Grand Traverse Bay embayment, located along the southern shore of Lake Superior on the Upper Peninsula of Michigan, were studied to generate a late Holocene relative lake-level curve for Lake Superior. Basal foreshore elevations, collected from the lakeward sides of beach ridges, were used to determine the relative elevation of Lake Superior when each beach ridge formed. The break in slope between each ridge and the lakeward swale was cored to ensure that the foreshore was penetrated and a maximum basal foreshore elevation was obtained. Basal wetland sediments, collected from swales between beach ridges, were dated to determine the age of adjacent lakeward beach ridges. Basal wetland sediments were recovered from the deepest part of selected swales along the coring transect. Basal wetland sediments provided a minimum age for the lakeward adjacent beach ridge and a least squares regression was used to reduce variability in the data and to approximate the age of unsampled wetlands. Beach ridges in the Grand Traverse Bay embayment formed between 900 and 3800 calendar years before 1950 (cal. yrs B.P.). The average timing for beach-ridge development of one ridge in the Grand Traverse Bay strandplain is 36 +/- 7.8 years. Groupings of four to six beach ridges indicate longer-term fluctuations in lake levels. Basal foreshore elevations indicate relative lake levels lowered about 4.5 m from 3800 to 1200 cal. yrs. B.P. and increased about 0.7 m from 1200 to 900 cal. yrs. B.P. A coarsening in foreshore mean grain-size per ridge also occurs at about 1200 cal. yrs. B.P. Foreshore thicknesses increase about 0.4 m from 2000 to 1200 cal. yrs. B.P. and remain fairly constant from about 1200 to 900 cal. yrs. B.P. Increased foreshore thicknesses indicate larger wave setup and may be related to a shift in the predominant wind direction that would produce greater wave setup in the Grand Traverse Bay embayment.