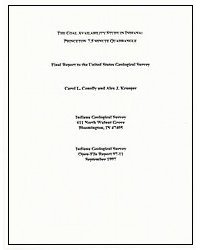 ABSTRACT: This study estimates the availability of coal resources in the Princeton 7.5 Minute Quadrangle, Gibson County, in southwest Indiana. The tonnage of original coal in place, remaining coal after mining, and available coal resources were calculated for seven Pennsylvanian coal beds underlying the study area. In descending stratigraphic order, the seven coal beds are the Danville and Hymera Coal Members of the Dugger Formation; the Springfield and Houchin Creek Coal Members of the Petersburg Formation; the Survant Coal Member of the Linton Formation, herein referred to as the unnamed Staunton coal. The unnamed Staunton coal and the Seelyville Coal Member belong to the Raccoon Creek Group while the remaining five coals belong to the Carbondale Group. Other deeper coals are present in the quadrangle but are not considered in this report because there is insufficient information to accurately calculate resources for these coals. The original, remaining, and available coal resources are reported in terms of coal thickness, "14-28 inches," or "greater thank 28 inches", and overburden thickness "100-1000 feet." Additionally, the resources for each coal are categorized by four levels of geologic assurance or confidence. The confidence categories express the degree of confidence of finding coal at a particular location based upon the distance from a data point. The four categories are: measured (0-0.25 miles from the data point), indicated (0.25-0.75 miles), inferred (0.75-3.0 miles) and hypothetical (3.0-10.0 miles). The total volume of original resources of the seven coal beds n the Princeton Quadrangle are calculated to be 1,012 million short tons. Of the 1,012 million short tons, 64 million short tons have been removed by mining or lost in the mining process, thus leaving 948 million short tons of remaining resources. Land-use and technological restrictions remove 551 million short tons from potential mining, leaving 397 million short tons (39% of the original resources or 42% of the remaining resources) available for mining in the area.