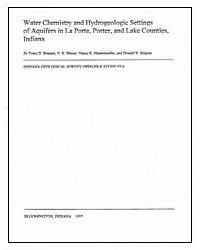 INTRODUCTION: The study area encompasses LaPorte, Porte, and Lake Counties with an emphasis on the Valparaiso Moraine and the broad outwash fan at its southern front. These surface forms are elements of Valparaiso megasequence. The project focuses primarily upon the quality of the water within the aquifer system of the megasequence. This aquifer is the major ground-water resource for both domestic and municipal users in northwestern Indiana. The aquifer consists of sand and gravel deposited in various subenvironments of outwash fans by the glacial meltwater from the Lake Michigan ice lobe. The fan forms the core of the moraine and extends southward beyond the moraine. Water-chemistry data from 122 water wells in LaPorte, Porter, and Lake Counties are included in the current report. The water-chemistry data include: 1) field and laboratory water-quality data for 50 domestic wells in LaPorte and Porter Counties (Branam and others, 1993a and 1993b); and 2) data for 72 water wells from the Indiana Department of Natural Resources Division of Water studies of the Kankakee River basin and the Lake Michigan region (Clendenon and Beaty, 1990; Beaty and others, 1994). The Division of Water data were included to permit a more extensive regional evaluation of the ground-water quality; however, the data acquired from the basin studies were not the same as that included in the two county reports by Branam and others (1993a, 1993b). For statistical analysis, comparable data sets were extracted from the two count reports and the two basin reports. A baseline survey of tritium, 18O, and deuterium in ground water from 23 wells in aquifers in LaPorte and Lake Counties is also a part of the study.