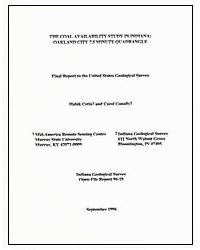 ABSTRACT: The availability of coal resources in the Oakland City 7.5 Minute Quadrangel in southwest Indiana was examined in this study. Total original, remaining, and available resources were calculated for seven Pennsylvanian age coal beds underlying the study area. In ascending stratigraphic order, the seven coal beds are Colchester Coal Member and Survant Coal Member of the Linton Formation; Houchin Creek Coal Member and Springfield Coal Member of the Petersburg Formation; Bucktown Coal Member, Hymera Coal Member, and Danville Coal Member of the Dugger Formation. Resources were calculated by assigning each coal data point to one of two coal thickness categories, "14-28 inches", or "greater than 28 inches" and to one of two overburden categories, "0-100 feet" or "100-1000 feet". In addition, each coal data point was characterized by four reliability categories (circles): measured (0-0.25 miles from the data point), indicated (0.25-0.75 miles), inferred (0.75-3.0 miles), and hypothetical (3.0-10.0 miles). The reliability categories express the relative confidence in finding coal at a particular location based upon distance from a data point. The seven coal beds comprised 674 million short tons of total original resources in the study area. Of the 674 million short tons, 130 million short tons have been removed by mining or lost in the mining process, thus leaving 544 million short tons of remaining resources. Because of land-use and technological restrictions, 265 million short tons (39% of the original resources or 49% of the remaining resources) are available for mining in the area.